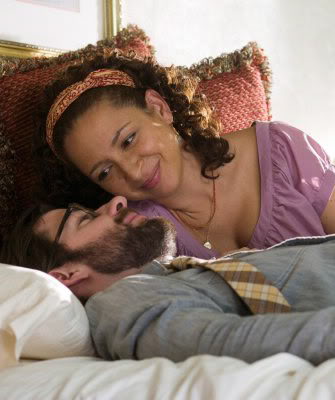 Had I gone into Away We Go uneducated about the filmmakers behind it, I would have been startled when the directing credit popped up at the end. This loose, scruffy travelogue sends a thirtysomething couple expecting their first child bounding across North America, ostensibly to look into potential new jobs and cities to reside in. That’s the plot. The dramatic intent is to give these characters a chance to survey different approaches to parenting and building a family, most of which they respond to with varied shades of horror. It’s the “loose, scruffy” part that’s surprising coming from Mendes. The unifying characteristic across his four prior films, whether good, bad or near-great, is a tightly controlled visual construction. Mendes’ films are unmistakably his, with every detail, every nuance, every shadow on the wall or reflection of the window seemingly orchestrated with fine precision by the director. It makes his films sumptuous but occasionally bloodless, soulless. In an almost self-protective fashion, the films draw so much attention to their construction that they threaten to become about the artifice of moviemaking. This approach actually enhances the themes of Reservation Road and, to a degree, American Beauty, but as a sustained aesthetic it’s a dead end.

That makes the shift represented by Away We Go very welcome, even invigorating. Mendes keen eye is still apparent: Several individual shots are striking in their thoughtful, quietly elegant construction. But it doesn’t feel so controlled. There’s room to move for the actors which makes it feel like the unexpected can happen. That may be the only realistic way to approach the sweetly shambling screenplay by married hipster literary icons Dave Eggers and Vendela Vida. This doesn’t make the fact that Mendes chose this unfamiliar route any less admirable. There’s a newfound earthiness to his work which in turn makes the film feel honest and real, even when it’s clearly veering into the satiric. It’s emotionally open, especially in the performance of Maya Rudolph as the woman who’s worried about the implications of bringing a child into a world that she herself hasn’t yet mastered.

For all this praise I’m heaping on Away We Go‘s shagginess, it’s worth conceding that a film that lives by its loose structure, dies by its loose structure. When a movie ambles along from incident to incident, the relative strength or weakness of each encounter is more important. When Away We Go is at its most inspired, it’s a spirited pleasure. When it falters, the strain is more pronounced than it would be with a sharply constructed plot as its backbone. Thankfully, the film is more often insightful than aimless, filled with moments that are funny or warm or, in its finest moments, both. If this is the artistic direction Sam Mendes keeps moving in, his best films may yet be further down the road.

One thought on “Going round in circles, here we go again”