One of the things that immediately captivated me when I started reading superhero comics was the interconnectedness of all of the stories. Up to that point I’d primarily read titles centered around blond-haired boys who engaged in various degrees of scampish behavior, and no lingering knowledge was really required from one issue to the next. The comics centered on altruistic, costumed figures fighting crime in the big city were different. These stories were still designed to always appeal to new readers, but if, say, Daredevil dropped in on Moon Knight he might casually mention some of the travails he’d been enduring recently with a helpful asterisk directing readers to a discreet caption box at the bottom of the panel which offered up helpful advice about exactly which mighty Marvel magazine could be purchased to obtain that particular pulse-pounding adventure. Though I never became one of those people who bought each and every series emblazoned with the Marvel banner, I was unreasonably enlivened by the notion that every story I read could be perceived as one slender chapter in an enormous saga stretching across decades and dozens of publications.

That made me the ideal mark for Marvel’s very first limited series. Closed run series were dominating television at the time, so translating the concept to the four-color world of the comics page made a certain amount of sense. For the company’s inaugural effort in this new approach, writers Mark Gruenwald, Steven Grant and Bill Mantlo concocted a tale that would bring all of the superheroes of this fictional world together. Mantlo carried it forward, handling the script, and it was penciled by John Romita, Jr. The end result was Marvel Super Hero Contest of Champions.

The very first panel of the three-issue series finds two cosmic figures speaking cryptically of a wager between them that will involve the recruitment of “super-champions.” In short order, the various superheroes of the Marvel stable begin vanishing, whether they are in the midst of battling an evildoer or just, you know, hanging out down at the club.

I always enjoyed it when superheroes were out and about doing mundane things in full costume. The Avengers would head over to the Baxter Building to play poker with the Thing, and they’d all sit around the table with their helmets and masks on. Tony Stark would have to spend the whole night squinting at cards through the little slits in his iron faceplate, his armor clanking every time he forcefully folded. Sure, Valkyrie is trying to unwind with a little cocktail there–a rum and coke, maybe, or a rusty nail–but how comfortable can she be since she’s still stuck in that weird metal bra?

Anyway, the mysterious disappearances continue for around ten pages or so before it’s finally revealed that all of the superheroes have been teleported up to what the bald characters figure out is a big domed soccer stadium in space. 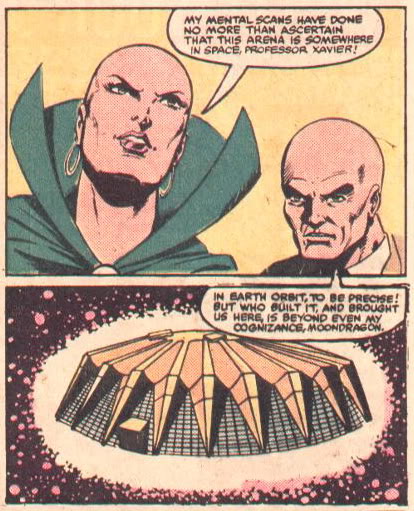 Interstellar gambling addict The Grandmaster and a spooky hooded figure appear to explain that the heroes are there to help them determine the winner of their wager. The two hovering demigods will choose up teams, not unlike kickball captains in elementary school gym glass, and the heroes they select will be dispatched to the four corners of the Earth to seek out chunks of a golden sphere. (For those wondering, the kids picked last appear to be Blitzkrieg and The Collective Man.) The entire planet is being held in stasis until the completion of the competition, so the heroes feel compelled to play along.

To enhance the sense that the world had been scraped clean of heroes for this contest, there were several champions of foreign countries created anew for the limited series or otherwise plucked from relative obscurity, leading to exchanges in which they needed to briefly and awkwardly introduced themselves. 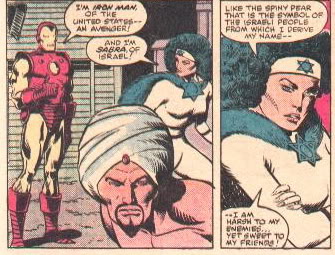 The superheroes fulfill the imperative to do battle in the quest for the shiny orange slices made out of precious metal, eventually collecting them all.

Once the sphere is assembled, the endgame comes into shape, and an old bit of Avengers continuity is invoked. That didn’t mean much to me when I read it then (truthfully, it doesn’t really mean much to me now), but the story still slammed an open palm down on all my inner geek buttons. It brought this expansive cast of improbably powered beings together into one adventure, no matter how strained and silly it may have been. It was proof of the unity of this fictional place I was exploring one issue at a time.

Capping that sense of encyclopedic thoroughness were the pages in the back of each issue, offering capsule summaries of every hero in the Marvel universe. 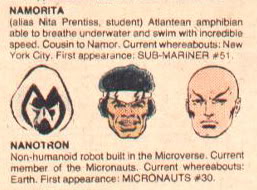 It was a mere taste of the series that would soon follow, the series that compelled me to spend a ridiculous number of hours studying fine print that articulated the very parameters of these titans’ powers (and occasionally spreading comics on the floor to get at the bigger picture).

But that’s a whole different part of my misspent youth.

50 thoughts on “My Misspent Youth: Contest of Champions by Bill Mantlo and John Romita, Jr.”