I don’t have strong, specific memories of most of my comic book purchases, but I remember exactly where I got Marvel Fanfare #3. I’d finished another miserable day in the trenches of Stoughton Middle School when a friend suggested a deviation from our regular trek to stock our pockets with Now and Laters at the local Open Pantry. He told me about a store on Main Street called Midwest Books and suggested we stop there on the the way home.

It’s probably more accurate to say it was above Main Street. When I first went there in 1982, the “store” was located in a cramped little office a flight up from the street. Shortly after that it moved into a proper shop, and eventually claimed some prime real estate in the heart of downtown, but in that instance it was still a overstuffed room or two where the proprietor sat and read as patrons pawed through his loosely arranged paperbacks and tattered hardcovers. There was also a few boxes of comics, old and new. Included among them was a glossy series I’d never seen before called Marvel Fanfare. At that point I was getting the most vital titles via subscription, but I was still patrolling the comics racks at local supermarkets and convenience stores to fill in gaps as I took in as much of the mighty Marvel saga as I could. I hadn’t seen Marvel Fanfare because it wasn’t available through those venues. Instead, it was Marvel’s opening attempt at selling a series strictly through the direct market, primarily meaning stores that specialized in comic books. The built-in elusiveness of it made me want it more, despite the heftier price tag. The presence of the X-Men on the cover didn’t hurt either.

As it turns out, Marvel Fanfare #3 featured the third part of a four-part story. The first two issues found erstwhile member of the X-Men Angel journeying to the Savage Land, the jungle paradise populated by prehistoric creatures that’s hidden beneath the icy surface of Antarctica. Daily Bugle photographer Peter Parker is along for the ride, and has to slip into his guise as the amazing Spider-Man when their quarry, beleaguered soul Karl Lykos, turn into his villainous alter ego, Sauron. Those first two issues were drawn by Michael Golden. For Marvel Fanfare #3, he was replaced by then current X-Men artist Dave Cockrum.

By the time I joined the story, Peter Parker had headed back to Manhattan, and the uncanny X-Men took his place. They were doing battle with Sauron and his allies, but also attempting to rescue him. This led to some odd moments, including perennial hothead Wolverine’s tussle with the frog-like Amphibious. 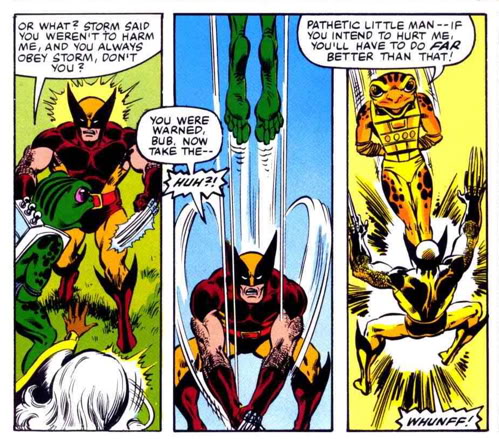 Wolverine was and is one of the most fearsome heroes on the Marvel roster, but he seems far less so when he’s getting deked by a scrawny frog dude.

Since it’s the Savage Land, the area’s most famous resident naturally needs to figure into the story, so Ka-Zar, Marvel’s golden-locked answer to Tarzan, makes an appearance. There’s an awful lot going on, but there’s always time to offer up a testimonial to the company that apparently stocks especially sturdy cutlery. 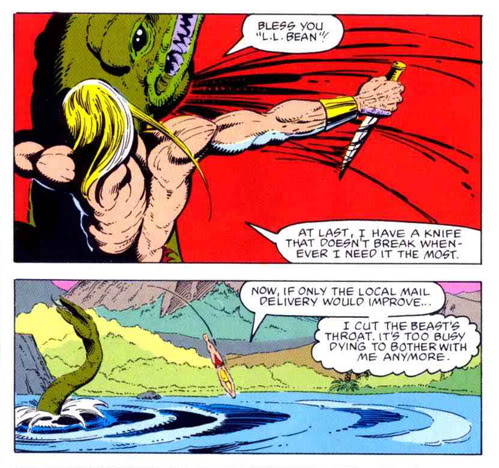 Hard to tell exactly which knife it is, however. Maybe a Buck 100 Folding Hunter’s Knife. The promotional announcement would be so much more effective if the Lord of the Hidden Jungle were just a little more specific.

If those pulse-pounding panels look a little different, that’s because the demands of a four-issue story apparently kept wearing out pencillers. Following Golden and Cockrum was Paul Smith, offering up an audition of sorts since he wound up assigned the main X-Men book a few months later. Smith seemingly took his cues from the artist who started the story as his figures have some distinct Michael Golden styling to them.

He and Claremont brought the story to its thrilling conclusion as the merry mutants seemed to be in the direst of straits, fully exhausted by what’s come before. But it’s nothing that can’t be solved with one more blast of force. 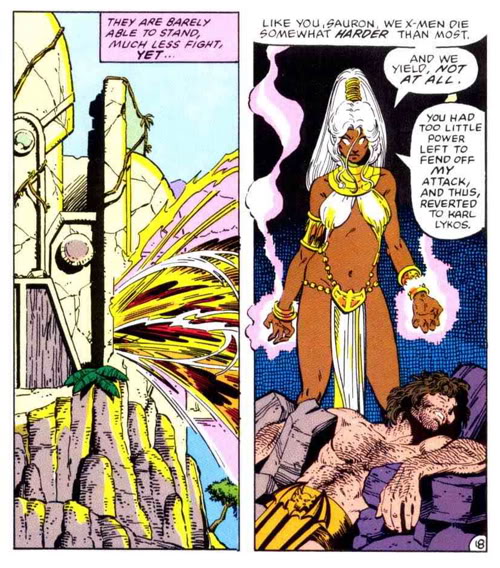 Storm is dressed up in a saucier version of the outfit Cordelia Chase wore on Pylea because any time the X-Men traveled to the Savage Land, she needed to wind up in something ridiculously revealing. Apparently, her normal costume wasn’t already sexy enough.

I didn’t get too many issues of Marvel Fanfare after that, though I remained unusually susceptible if the cover betrayed an X-Men connection, no matter how tenuous. It was in part because the series was a little too haphazard, varying wildly in quality from issue to issue (especially as the stories being presented were increasingly inventory stories previously held in reserve to provide a quick fill-in when the dreaded deadline doom interrupted the regular run). But it was also because it never again had that same sense of surprise as when I first pulled it out of the box in that cozy, musty room masquerading as a book store.