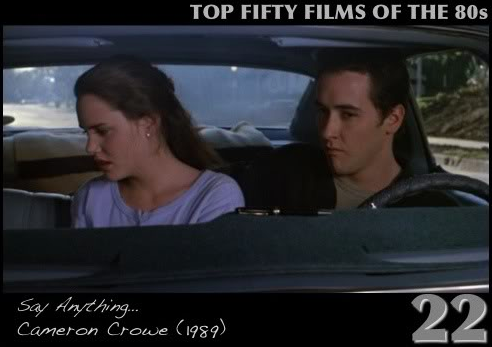 #22 — Say Anything… (Cameron Crowe, 1989)
As I acknowledged at the beginning of this particular countdown project, the peculiarly personal tug I have for some of the films from this ten-year span had a significant impact when I sat down to rank them. This was the era when I was first really developing my cinematic palette, seeking out Oscar-winners and complicated, critically-acclaimed endeavors to supplement the quotable comedies that were already an established part of my viewing preferences, but I was also still just a kid sorting out his place in the world, struggling with the stereotypically teenager dilemmas. So, a movie about a moody, lovelorn, verbally precocious and yet awkward, well-meaning guy who’s freshly graduated from high school and listens to “Within Your Reach” by the Replacements when he’s feeling low that came out during my freshman year of college? Yeah, I could relate.

That preface isn’t intended to excuse my appreciation for Say Anything… as merely the result of nostalgia. If anything, the film looks stronger to me the further removed I am from the angst that fuels it. I’ll never again be an active participant at a sprawling party of teen revelers that includes a smart, emotive redhead singing songs of romantic pain with her acoustic guitar in a back room, but the distance actually gives me a greater appreciation of the screenwriting craft that writer-director Cameron Crowe demonstrates in these scenes. Everything spoken carries some piece of information about the characters: their perceptions, their aspirations, the make-up of who they are. Crowe was mentored by James L. Brooks and approaches his dialogue with the same commitment to efficiency, fullness and truth in the words. The dialogue should have a revelatory purpose beyond just being funny or clever, and Crowe adheres to that principle admirably throughout the film.

When it arrived in 1989, the film’s depiction of the freshly sprung high schoolers in Say Anything… was wise and realistic enough to serve as a sort of antidote to the parade of hyperactive comedies that helped define the decade that preceded it. It was a trend that Crowe himself helped start as the screenwriter of the fine Fast Times at Ridgemont High in 1982, but it was really the outings that, in way or another, bore the stamp of John Hughes that formed the strongest impression. Too often built on an unseemly mix of sentiment and snark, and then dressed up in anxiously quirky trappings, those movies tried to disguise platitudes as genuine emotion. Crowe is getting at the real deal in Say Anything…, the way piercing hope can turn into devastating heartbreak with the simplest gesture. In this fantastically accurate the depiction, the fragile interactions of the teen years have something key in common with Crowe’s approach to filmmaking: every moment has potent meaning. There’s always a deeper implication that needs to be unpacked.

The casting of John Cusack as the film’s hero, Lloyd Dobler, is inspired, and not just because the actor had done his time in prior teen comedies. Cusack obviously cut a perpendicular line to most of the fare that featured and played to his demographic throughout the eighties; given a Kubrickian amount of takes, he never could have played Ferris Bueller or Marty McFly. The character let him tap into his moody intelligence in a way that hadn’t really been afforded to him before, forgoing the sort of consequence-free pining that usually characterizes movie love affairs for a heartfelt consideration of the full extent of romantic elation, uncertainty and pain that are laced through any relationship of meaning. Still just twenty-two-years-old at the time of the film’s release, Say Anything… represented a sort of graduation for the actor himself: he’d never again play a role that could be thought of in any way as a kid. To a degree, that was a purposeful choice on the part of Cusack, but I think the well of complicated inner life that he brought to Lloyd Dobler gave him the authority within the industry to make that choice.

It’s easy to put Say Anything… in a box, to categorize it entirely on the basis of the setting that it moves through, the age of the characters and the dynamics of the different exchanges within the film. I probably even did that at the time of it’s release, claiming a certain ownership over the film because of the proximity of the characters’ ages to my own. The beauty of Crowe’s directorial debut, however, is that it wisely uses its specifics to explore ideas and emotions that are truly universal.