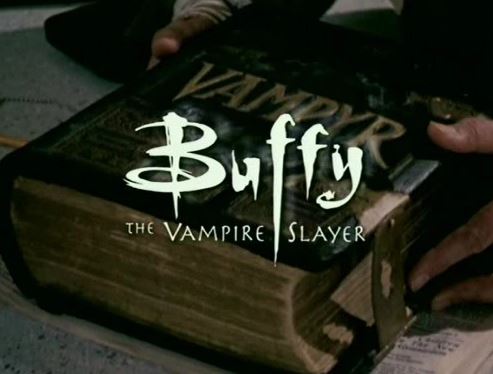 I believe fans of Buffy the Vampire Slayer think of the show in terms of seasons. That’s in large part because show creator and chief creative force Joss Whedon did the same. The show began with a little bit of a “monster-of-the-week” approach, giving Whedon a chance to use his love of genre trappings to metaphorically explore the various travails of being a teenager, essentially restoring the subtext that was largely stripped away when his screenplay with the same lead character and concept was made into a tepid 1992 movie. Quickly, though, he started to use the advantages of extended storytelling inherent to episodic television to build larger narratives that spanned across the full year. Viewers of Buffy quickly became accustomed to the parlance of the show’s creative structure, particularly the presence of a “Big Bad,” the villain whose evil machinations would spread out, more or less, across the full twenty-something episodes that got the characters from the season premiere to its finale. Because the show is divided into these big blocks, weighing the relative merits of one season against another is a fairly standard pastime for Buffy aficionados.

For a long time, my resolute stance in such a debate celebrated the excellence of the third season, perhaps most notable for the introduction of Faith, the fellow Slayer who took a more, shall we say, hedonistic approach to her role. While I stand by that stretch of the series as exceptional (I’ll add a parenthetical genuflection before the episode “Doppelgangland”), I think my preference for it was colored somewhat by my own personal discovery of the show during the third season, my snobbery against a show about high school kids fighting creepy creatures finally eradicated by actually, you know, watching it. When really thinking it over, I actually think that the show peaked a couple seasons later.

Season five may not be an especially popular choice for the best of the series, given that is has a few elements that are, to put it kindly, controversial among the fan base. There are some who were never entirely comfortable with any of the episodes that took place outside of the high school setting and the first half of the season finds Buffy in a relationship with one of her least popular paramours. Most importantly, the season’s major storyline hinges on Dawn, Buffy’s previously unseen younger sister.

My perception is that Dawn is not an especially popular character among Buffy fans, and those who have the strongest feelings of animosity towards her therefore tag this season as the beginning of the show’s descent. I think, to a degree, some of that ill will is more reflective of the following seasons, when the producers seemed to have little idea of how to use the character any longer, and she tiresomely fell into peril more often than Nell Fenwick, eventually leading to the knowing line of dialogue, “So, Dawn’s in trouble? Must be Tuesday.” In season five, however, her purpose was clear and compelling, both in the fictional context of the Buffyverse and the meta-commentary Whedon and his collaborators were offering on the tropes of television. In terms of the latter, it was still somewhat commonplace for shows featuring younger characters to find laborious ways to inject new kids into the mix as the main characters age. Dawn was, in effect, the “Cousin Oliver” of the show, but Whedon managed to slyly mock the convention, even as he was employing it. Within the context of Buffy’s extended arc, it provided an interesting new step on her journey to adulthood. She winds up taking a protective, nearly maternal role with her little sister, which is an expression of her decisive transition from girl to woman.

Initially, Whedon wrung significant comedy and tension from the contrast between Buffy’s stereotypical Valley teen persona and the superhuman powers she had in facing down fearsome beings. He’s said that the basic premise was as simple as taking the girl who was usually the shrieking victim in a horror film and instead making her the formidable hero, an elegant and meaningful turning of the tables. By this point in the run of the series, after she’d faced down countless demons, in both literal and figurative manifestations, it began to seem just off for Buffy to continue to be a little ditzy and flippant. She not only bore the weight of the world, she was one of the only people capable of doing so, a level of personal power that she was beginning to realize, if not fully embrace. In the mid-season episode “Checkpoint,” she articulated that realization in the most explicit fashion, effectively delivering a statement of personal purpose and self-belief to the shadowy council that served as a sort of Board of Trustees of the centuries-old Slayer culture, realigning her relationship with them in the process. As Buffy put it, “I’ve had a lot of people talking at me the last few days. Everyone just lining up to tell me how unimportant I am. And I’ve finally figured out why. Power. I have it. They don’t. This bothers them.”

Within this resides Whedon’s own pointed, enlightened views about the systematic societal diminishment of one-half of the global population on the basis of their gender. If the entire series can be said to be about the myriad of ways in which Buffy Summers is underestimated by society, then the fifth season is when Buffy starts to wise up to that inequity and address it. In many ways, her new maturity has a direct contrast in the form of the season’s “Big Bad,” a malevolent god intent on performing a ritual that will essentially unleash the hellish reality that is her home dimension upon the earth, ushering in a sort of end of the world. This god manifests as a mean-spirited glamor girl named Glory who surrounds herself with sycophantic underlings that endlessly praise her beauty and wonder. This is Buffy’s former cheerleader superficiality unchecked by growth, kindness and empathy. As played by Clare Kramer, Glory is very funny delivering her cruel chatter, but she is also a nightmare vision of what Buffy could have become if detached from the great responsibility that came bundled with her great power.

The season also includes the single best hour of television that Whedon ever created, an episode that demonstrates the artistry that can be embedded in the often dismissed form, calling upon the established knowledge of the characters in a stirring way while also reinventing the very visual and auditory structure of the show to heighten the impact of the emotions. The episode was “The Body.” One of the subplots running through the season involved an illness endured by Buffy’s mother. It seemed to be resolved safely when Buffy came home to find her mother’s lifeless body collapsed on the couch. And so a series that revolved around a character who did her duty to humanity by driving wooden stakes into the hearts of her foes (who were, of course, undead monsters, but still…) dealt with death and grief in the most quietly intense, heartbreaking, human way possible. The episode showed how the characters awkwardly came together to support one another, finding reserves of strength to share with their friends even as they themselves were emotionally shattered by the news. Written and directed by Whedon (by this time, a sure sign that the episode was going to be imbued with significance, creativity or, most often, both), the episode made the fragile reactions of the characters concrete with different structural devices, including Buffy’s rapid-fire fantasy of her mother being saved by the paramedics and some slightly off framing of images as an expression of the tendency of those under duress to find themselves focusing on unlikely things in their line of vision as a way of gently retreating from their sad new reality, if only for a moment.

It’s a daring episode, as potent of a depiction of the mad rush of confusion and spiritual agony that accompanies the loss of someone dear as I’ve ever seen. Sarah Michelle Gellar’s work as Buffy Summers was always undervalued, an unsurprising side effect of serving on a genre show of the sort that the awards-giving bodies are generally happy to ignore (being buried on the teeny-tiny WB network didn’t help either). She consistently brought depth, insight and ingenuity to her portrayal, and this episode contains the most powerful expression of her talent.

As a series, Buffy was always prone to digressions. It never completely shook off the tendency (or maybe the need) to build in a new supernatural challenge every week. Sometimes, this inclusion of a “monster-of-the-week” could be tied in with the larger master plot, but it often couldn’t, leaving all sorts of scattered episodes of varying quality that didn’t contribute much to the whole. When fans advocated for Whedon to leave broadcast network television behind and try creating a series for a cable network–a prospect that Whedon, son and grandson of sitcom writers, never seemed especially enthused by–I think most of them were intrigued by the greater latitude in content such a setting would provide, or at least the idealized perception that Whedon would have more uninhibited creative control. For me, I thought it would be a good fit because the transition to an expectation of a ten-to-twelve episode season would impose a valuable storytelling discipline that eluded him when there were over twenty hours of programming time to fill.

He solved this dilemma with the finale of season five, another episode he wrote and directed entitled, “The Gift.” Details from earlier in the season that initially seemed entirely unconnected the overarching plot–the appearance of a troll god with a connection to one of the supporting characters, the building of an android that uncannily resembled Buffy–were incorporated into the episode’s story, often as integral components. In a way that’s largely absent from other seasons, all the bits and pieces of the bigger story are drawn together in an ideal final chapter. That’s also true thematically, as the sense of responsibility that’s been growing in Buffy, coupled with her connection to her mystically-created sister, causes her to make the only logical choice available when the direst of circumstances arises. In a remarkably tight episode, every major character (and there were a lot of them by this point) gets at least one significant moment, many of them among the most moving in the entire run of the series.

To this day, I wish the series ended with this season finale, even though it hurts me to consider an existence in which the following season’s highly beloved musical episode, “Once More, with Feeling” never would have come into being. (By extension, that would also mean the absence of Dr. Horrible’s Sing-Along Blog, but let’s not even think about that.) “The Gift” could have been a perfect close to Buffy’s story, one that beautifully celebrated the character’s strength, generosity, compassion and bravery, with a welcome hint of her stubbornness too. If I can’t have that–and though I pretend sometimes, I know I can’t–I can at least find solace in the certainty that it’s an equally satisfying conclusion to the finest season the series ever had.