The Marvel Age of Comics was marked by scintillating storylines full of careening colorful characters. Still, those four-color feasts might have gone unread if not for the pulchritudinous panache employed by the marketing mavens who put together the “Bullpen Bulletins” and “Mighty Marvel Checklist” pages. They had a gnarly knack for making every individual issue seem like the second coming. For example, the promotional pitch for Captain America #131 promised: “The title tells it all–‘Bucky Reborn!’–or does it? It doesn’t even mention the last villain you ever expected to see!” Face it, true believers, this one claims to have it all.

For the uninitiated, or at least those who’ve been a might misled by the Tinseltown take on the history of the heroic shield-hurler, the “Bucky” of the tale’s title is Bucky Barnes, the bold boy sidekick of the star-spangled superhero. Bucky was clinging to an aircraft that exploded in the same late-war accident that preserved his partner as a patriot popsicle, destined to be thawed out and returned to hero duty several years later. Joyful as Cap might otherwise be, he remained tragically haunted by the death of his young partner. So any malevolent rapscallion worth his salt knew that one of the best ways to mess with Captain America’s pysche was to make it seem like Bucky was still around. 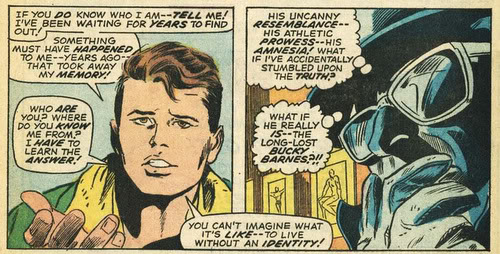 Intriguing idea, shadowy figure. But in the baddie biz, there’s no time to tear at worrisome walls someone’s bruised brain may have built and bolstered. At least not when there’s simple hypnosis available to send him spinning.

I did say simple, sahib. With the rascally ruse in place, the time was nigh to get to the righteous reveal. Who exactly is the last villain anyone ever expected to see? 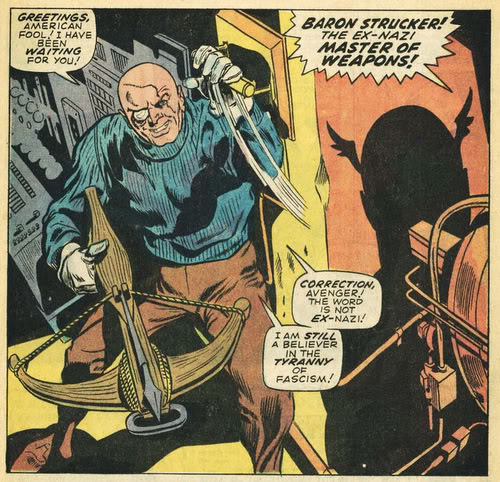 Granted, he looks pretty fearsome with him monocle, crossbow and cable knit sweater, but unexpected? I’m not sure that term can be accurately used any time a villain with Nazi Party affiliation shows up in the pages of Captain America’s riveting rag. Regardless, there’s sure to be a boisterous brawl popping up in the panels, and, sure enough, the surly swastika sycophant serves up a sensational scrap. For a while, it seems like Cap might have the upper hand. 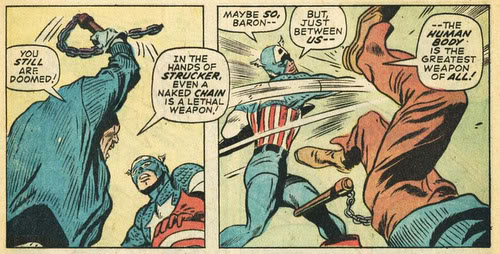 But, as is often the case with these things, a terrible turn is taken and Captain America finds himself a trapped token in Baron Strucker’s ghastly game. Not content with using his mastery of weapons to finish off his longtime nemesis, Strucker strings him up on a trap with a time limit.

Holy Tragic Timepiece, Cap-man! It’s all awful, at least until the boy in Bucky’s britches summons up his wobbling wherewithal and rescues the red, white and blue battler. Once freed, he fells the bawling Baron with a single smack. And what about the true identity of this possible pal pulled from the past? That’s a hyperbolic question for next issue, True Believer!