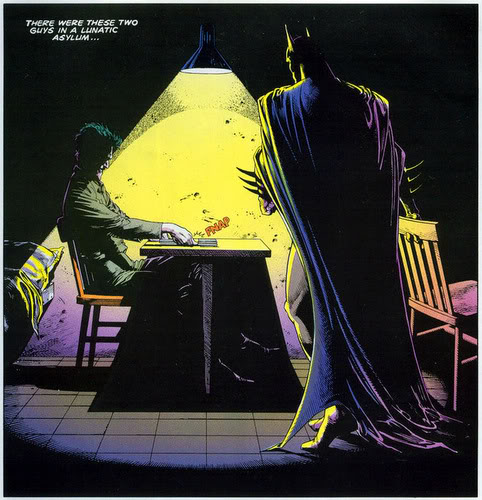 When I was teenager, I tiresomely informed others about the validity of comic book storytelling as an art form, quickly pointing the relatively contemporaneous exalted masterworks as prime evidence. These were great works, I was sure of it. I also had a lot of outside sources backing me up on that. But I also also really wanted the major superhero stories that were part of the two major companies’ regular continuity to be at that level, to stand as a form of modern literature at least on par with the significant novels being published at the time. So when something was issued that seemed to aspire to that sort of ambition, especially if it was printed in the fairly new “bookshelf format,” boasting heavy, glossy pages. And if it was written by Alan Moore? Well, circa 1988, you couldn’t do any better.

Moore was the prize creator in the DC Comics stable, having just completed a lengthy, transformational run on Swamp Thing and the even more impactful limited series Watchmen. Though the British writer’s tenure with DC ended very, very badly, there was a stretch where he was allowed to do practically anything he wanted at the publisher. And what he wanted to do was tell the ultimate Batman and Joker story, one that explored the mad reactions to personal hardship that united the two characters. He got artist Brian Bolland to make an increasingly rare foray into creating the interiors of a book, and the result was Batman: The Killing Joke. With the project, Moore also wanted to effect a major change on a character who’d been around for a long time, presumably to add some real consequences to the murderous mania that consumed the Joker.

Barbara Gordon made her first comic book appearance as Batgirl in 1966. Created at the behest of the producers of the Batman TV series, she was the daughter of Police Commissioner Jim Gordon, putting on her own cape and cowl to fight crime in Gotham City. I don’t know that the character was ever hugely popular, but she did become something of a fixture in the DC universe. Regardless, she was a significant enough character that it was a shock when she was on the receiving end of a bullet fired by the Joker’s gun, a bullet that left her paralyzed from the waist down.

Within the story, this assault was just one part of the Joker’s master plan. Besides the attack on Barbara, the Joker and his henchmen also kidnapped James Gordon, bringing him to an abandoned amusement park the villain had acquired through nefarious means.

The Joker’s intention was to prove the unalterable, irresistible impact of one very bad day. Any sane person confronted with a parade of unconscionable personal horrors would go make. According to the Joker’s premise, that was the only possible outcome, a thesis he presented as a justification for his own madness and the appalling acts that resulted from it. Gordon was strapped naked to the rumbling train car of a fun house ride and dragged through bleak tunnels with images of his daughter, wounded and stripped naked, projected onto the walls.

This prolonged act of self-justification is paralleled with a retelling of the Joker’s origin story, which finds him recruited against his will into a criminal act that leads to an accident which forever distorts his features into the visage familiar to comics fans. From a storytelling standpoint, Moore wants to play with the elements of the Joker and Batman that mirror each other, the bonds they have together and the distance between them that put them of separate opposing paths. That aspect of the story is even explicitly acknowledged within the panels.

Ingeniously, the origin story that Moore has concocted for the Joker throughout the preceding pages is essentially discarded by the character in the acknowledgement that his memory shifts with the seismic plates of his madness. It’s a wicked quirk that Christopher Nolan borrowed for his interpretation of the Joker in 2008’s The Dark Knight. Moore upends the comic book trope of revealing secret histories with the offhand revelation that nothing of the Joker’s history that has been presented should be considered definitive. It’s just another imaginary story. Aren’t they all?

While Moore’s story arguably shaped the depictions of both Batman and the Joker for years to follow, it was that heinous act against Barbara Gordon that lasted the longest. It would have been very much in keeping with the incredible healing properties found in the realm of superheroes, where even death is a temporary ailment, to have Barbara experience a rapid recovery. Instead, she remained in a wheelchair, eventually adopting the identity of Oracle, transmitting vital, rapid intelligence to the various costumed heroes who still roamed Gotham City’s night. In this iteration, the character was actually far more interesting and complex than she ever was as Batgirl, something the various DC creators and editors who came and went over the years seemed to appreciate.

This valuing of Barbara as Oracle ended abruptly when DC Comics mounted their major reboot last year. Despite having a couple different recent versions of the character they could have drawn from, each with a unique and fervent fan following, the publisher decided to use the fresh start to put Barbara Gordon with full mobility back into the costume, keeping the incidents from The Killing Joke in continuity but retroactively giving her exactly the sort of unlikely physical comeback they had the courage to avoid the first time around. It may have been a commercial success, but it still seems like a poor choice creatively.

I’m not sure if The Killing Joke actually lived up to the aspirations I imposed on it. Whether it’s truly fine literature rendered in sequential art of grim humans in ludicrous outfits remains debatable. It surely convinced enough other comics creators that it was, and for many years afterward writers and artists proved the supposed maturity of their work by pouring sex and violence into the stories. Dark as The Killing Joke may have been, I don’t think Moore and Bolland intended for that sort of inept mayhem to follow in its wake. That’s a major part of its legacy, though, and it’s hard to look at the book now without thinking of some of the unintentional damage it inflicted on the superhero comics that aspired to it lurid thrills.

22 thoughts on “My Misspent Youth: Batman: The Killing Joke by Alan Moore and Brian Bolland”