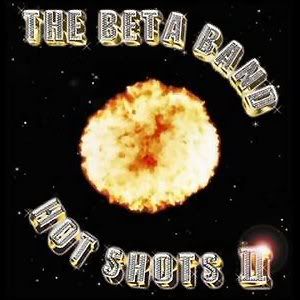 Like a lot of people, I suppose, my first exposure to the Beta Band came in the single finest moment of the decent but disappointing 2000 film adaptation of Nick Horby’s novel High Fidelity. Unlike the predicted five patrons of movie character Rob Gordon’s store, hearing the excellent “Dry the Rain” didn’t inspire me to purchase the band’s The Three E.P.’s (though I happily had the song on the movie’s soundtrack), but it did lodge the Beta Band in my head as one of those acts that merited attention. Right around the time I had the blessed opportunity to become acquainted with the new generation of bands that had a foothold on the college charts (at just about nowhere else), the second studio album from the Beta Band, Hot Shots II, arrived. Given my meager previous exposure of the band, I theoretically had a fighting chance to connect with the release with at least a little working knowledge, but the noncommercial terrain was now one upon which a single with a sample from the Günter Kallmann Choir’s 1970 version of Wallace Collection’s “Daydream” could be scrapped because there was already a totally different single out there with a sample from the Günter Kallmann Choir’s 1970 version of Wallace Collection’s “Daydream.” The world of college radio as it now existed was clearly designed to keep me discombobulated for as long as possible. I remember Hot Shots II as good but elusive. It was clearly going to take me a while to get used to life on the left of the dial again.

Earlier in this iteration of the countdown, I speculated that Satellite Rides by Old 97’s might be my favorite album of 2001. At the time, though, I distinctly remember being absolutely convinced that a different album deserved to be called the best of the year. The debut full-length from New York’s the Strokes, Is This It, arrived with so much breathless hype that the backlash was practically built right in. In the mid-nineties, I remember being shocked at the rapid turnaround time from adoration to disdain that dogged the band Veruca Salt, but that was the height of measured, ruminative patience compared to what the Strokes faced. That was partially because the record had a head start, getting released in England several months ahead of its planned U.S. bow. And then that date was shifted later yet, in part because the events of September 11th made the band and the label rethink the inclusion of the hardly laudatory song “New York City Cops” since it didn’t exactly seem like a time to take shots at first responders (the track was replaced by “When it Started”). The band also probably lost some credibility points in certain quarters because they replaced the racy cover art used for European releases (pictured above) with a more abstract image that is evidently a close-up of particle collisions. Everyone involved maintained that the band simply liked the new design better, but suspicions persisted that they were preemptively acquiescing to conservative retailers in the U.S. Whatever other problems the album may have had–besides everything else, I have a recollection of the individual band members consistently coming across as poser tools in interviews–there was little issue that could be taken with the music on the album. Even if it was derivative of any number of old post-punk classics, it was still sharp, clever and engaging, undoubtedly walking the trails well-blazed by their influences but doing so with consummate skill and just enough wily invention. Defined as much by their detractors as anything they themselves were creating, the Strokes weren’t able to get out from under the criticism heaped upon them with subsequent releases. I’m quick to agree that their third album, 2006’s First Impressions of Earth, is pretty band, but the other efforts all have their charms, even Angles, their much derided 2011 return after a five year layoff. I think it’s a damn good, resolutely weird take on bent nineteen-eighties pop, the best album that the Tubes never got around to recording.