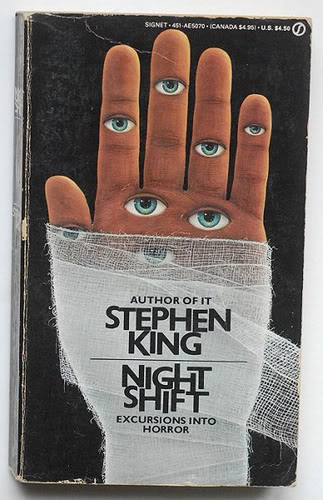 I had a bunch of blocky Stephen King paperbacks on my shelf for a long time before I dared to commit to one. As I’ve mentioned before, I owned a copy of The Shining that beckoned to me occasionally. I was a bit of a sucker for any book that had been turned into a movie, or, for that matter, novelizations of stories designed first and foremost for the big screen. Being quite young at the time of its release, I hadn’t seen Stanley Kubrick’s screen adaptation of the novel, but it still had a remarkably ubiquitous media presence, even as I now have trouble remembering how certain films flared into cultural dominance without the kindling and oily rags of the internet. I couldn’t even touch the spine of that book without the image of Jack Nicholson wielding an axe charging in front of my mind’s eye. Being a squeamish kid, that terrified me enough. The fact that the beset youthful protagonist of the book and I shared the same first name was cause to make me stop any attempt at reading the book after completing no more than a page or two.

I’m not sure if The Shining eventually wound up being the first Stephen King book I read. I tend to think of my inauguration as Night Shift, his first short story collection. It stands to reason that the logical part of my brain would have settled on the relative safety of that book, the unconnected stories allow for easy off-ramps in case things got a little too unnerving for me, a very real possibility as I probably hadn’t even crept into my teenage years at this point in time. I have distinct memories of reading the book on a family trip to some northern Wisconsin cabins near Eagle River, diving in to opening story “Jerusalem’s Lot” in the backseat of the car. One of the stories did indeed freak me out (weirdly enough it was “The Mangler,” about a marauding industrial laundry press that was murdering people, not exactly the height of plausible horror), which may not be surprising given that I was reading it in a relatively isolated, too-quiet cabin in the gloomy depths of night.

Whatever the first book I read, I was immediately hooked. Luckily for me, King books weren’t at all hard to come by. While King is a clear and sustained brand now, he was more than that back in the early nineteen-eighties. He was a full-on sensation and there were copies of his books absolutely everywhere. I don’t think I actually paid for a single one of his works until deep into my high school years (I know for a fact that I paid hard-earned dollars for a trade paperback copy of 1987’s Misery). Instead, I was buried with loaners from friends and used copies from relatives, shifted over to me as gifts. King’s ludicrously prolific nature was even more pronounced back then, and I tried to match it in my own way, racing through the various novels and collections. The only books in my life that I’ve gotten through faster were those that involved emerald-hued breakfast items or treating a parent like a trampoline.

And I have a bevy of memories that go with all that reading: giggling in middle school study hall at the way King nicely captured the voice of George Carlin in an entertaining digression in Cujo, animatedly debating with my friends about which portions of Pet Sematary were the scariest and deciding one late night in my basement bedroom that I was going to finish The Dead Zone in that sitting and staying up until the dawn light was beginning to paw at my windows. Then there was the night in my grandfather’s house when I got so completely spooked while reading It (by a passage involved some hallucinated face-melting, if I’m remembering right) that I decided the best recourse was to quit for the night and go to sleep, which was entirely fine until the piece of plywood that covered the entryway to storage under the eaves inexplicably came loose and fell against the headboard of my bed with a loud thump. I found out how quickly I could turn on every light in the upstairs that night. The answer: quite quickly indeed.

King belonged to my high school years and my high school years belonged to him. I read him a little more once I got to college, buying and reading The Dark Half one summer and plowing through the extended version of my favorite of his books, The Stand, shortly after it came out in 1990. I’ll admit that I started to tire of how often his lead characters were writers, which may have been my perception more than it was reality. Although I know I haven’t embraced King in the years since, I still find it a little shocking to realize that I’ve only read one book of his in the past twenty years, the serialized prison novel The Green Mile.

I liked that book quite a bit, but it also felt familiar enough that it gave me no great charge to revitalize my dedication. I haven’t exactly outgrown King, but I sometimes feel I’ve already taken everything I need from him. And, in the end, there are just so many other books to read. Still, I’m haunted by the copy of 11/22/63 I saw in a local used book store several months ago, priced at a pittance at half a sawbuck (less than a penny per page!). The novel was greeted with such rapturous reviews that I couldn’t help but have my interest piqued, and there it was, available for a proverbial song. Very busy and without cash at the time, I bypassed it, returning a couple days later to find it understandably vanished, undoubtedly claimed by a fellow patron who understood the value before her or him. Regardless, it helped me figure out that I’ll get back to King again someday. As his fiction has argued time and again, the unexpected can become likely at any moment.

31 thoughts on “My Writers: Stephen King”