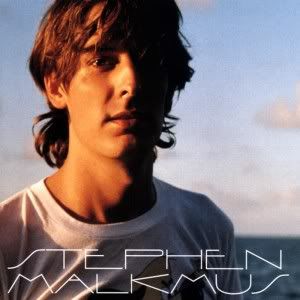 As has already been made clear, no doubt, in these past couple of weeks, the upper reaches of the 2001 CMJ album chart invites a fair amount of compare and contrast between my graduation from college radio as a student in the early-to-mid-nineteen-nineties and my return as an advisor at the launch of a new century. That’s remains true with the album at #4, the official solo debut of Stephen Malkmus. His most famous prior work, as a member of the band Pavement, was startling to take charge of the college charts in my final years at 90FM-WWSP, the educational, noncommercial radio station of my student years. While the band’s debut, Slanted and Enchanted, did quite well on the charts and developed an immediate, fervent fan base, I seem to recall it having only the most meager of impacts at our station. 90FM staffers were always a little slow to come around to the odder or more abrasive material, and Pavement’s defiantly half-formed ideas didn’t exactly click with us. It was a viewpoint I generally shared, despite the ever-mounting critical (and cool kid) consensus that I was supposed to see all this as resoundingly transformational. By the time I was working in commercial alternative radio station a few later, enduring the complaints of haughty listeners that were complaining we weren’t playing Wowee Zowee (while sympathetic to the assertion that out playlist wasn’t daring enough, the few things I’d heard off that record were flat-out bad), I was completely over the notion that this was a band that demanded my attention and affection. My contrarian opinion largely carried over to Malkmus’s self-titled solo bow, though there was at least a little more respect for genuine songcraft to be found there. To his further credit, Malkmus didn’t really want this effort to be released under his own name, preferring to start up a new band and simply call it the Jicks. Then the record label intervened. Of course, later releases were issued under the compromised moniker of Stephen Malkmus and the Jicks, and most fans also consider that to be the proper artist assignment for this effort, regardless of how the cover reads. Malkmus has kept right on with this musical derivation, releasing albums with an unrushed consistency. The almost inevitable Pavement reunion occurred too, which only served to further solidify his status as one of the elder statesmen of indie rock.

Like Mr. Malkmus, the artist one notch above him on the chart first starting earning their college rock reverence as I was thinking about collecting my diploma and fretting about the real world. Radiohead’s debut album, Pablo Honey, came out during my final semester, grabbing attention with its moody guitar rock and even securing an unlikely crossover into the Billboard Top 40 with the lead single, “Creep.” It was an impressive start, and yet gave almost no indication of the sizable influence to come as Radiohead rocketed to prominence with later releases OK Computer and Kid A. By 2001, they were so clearly one of the most important bands to programmers on the left end of the dial that even a release pulled together from material recorded at the same time as Kid A but not used otherwise could be strung together into an album that dominated playlists for months. That may have been the genesis of Amnesiac, but the band insisted that it was a proper release, not a ragtag collection of musical scraps. Truth is, it might not have mattered given how hungry fans were for any new music, even coming less than a year after the previous release. Amnesiac is a fine record, although I think it’s also the first hint that the Radiohead sound was reaching its saturation point, that it was all starting to blend together a bit. For me, anyway, there are only so many times I can plunge into clouds of ethereal sonic majesty.