This is a piece I wrote for a friend’s self-published magazine about a year-and-a-half ago. With Room 237 in theaters now, it seems a fine time to share it here. With only a few modifications–including some helpful hyperlinks–here’s my take on the long reach of The Shining. 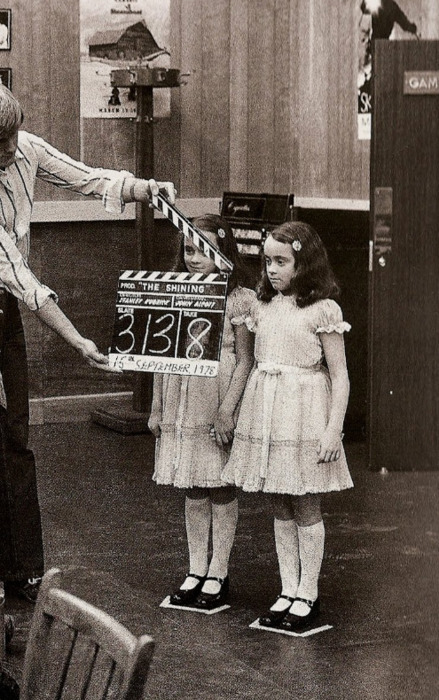 When Stanley Kubrick started filming The Shining in the late nineteen-seventies, movies weren’t a disposable medium, but they were fleeting. VCRs were commercially available by that point, but they were hardly pervasive. A movie was something that was experienced in the theater, once or maybe a few more times for those who locked into an obsession about wars among the stars or some such thing. After a stint on a premium cable channel promising unexpurgated content, the film would eventually make the rounds on commercial television, though with a sizable chunk of the content finessed to keep the film palatable to the ever-skittish public and the federal overseers who swore to protect them. Beyond the fact that a movie’s impact was almost assuredly diminished with each repeat viewing as elements that were meant to be surprising became familiar instead, the real experience of a movie was available only briefly, during its run in theaters which lasted anywhere from a few weeks to several months. From there, it lived on in its truest form—uncropped, unedited, larger than life—only in the memory.

Even still, the control over the inevitable modification laid elsewhere. Networks and studios collaborated to figure out which dirty words needed to be excised, which images needed to be blurred and which needed to be knocked out altogether. What’s more, the aspect ration of televisions was drastically different than those of movie screens, reflecting a modification that theaters had made in part to combat the suddenly availability of visual entertainment in the hidden comfort of the home. When a theatrical release had its television run, the image was cropped, sometimes leaving as much as two-thirds of what was originally offered outside of the plane of the television screen, another adjustment in the hands of broadcasters rather than consumers. The movie always belonged to others. The best an audience member could do was buy a ticket.

That control residing solely with the creators (and those that, ideally, the creator had some direct connection with and sway over) was what Kubrick preferred. The famously meticulous director wanted his films exactly the way he wanted them and no other way. After 2001: A Space Odyssey had its premiere in 1968, the director decided that almost twenty minutes of material had to come out of it, even though it went into general release just a few days later. Instructions were sent to theater owners that already had the print instructing them on how to edit the movie to his satisfaction. There were even stories about Kubrick himself pedaling his bike from theater to theater to make the trims personally, a story that may not be true, but is plausible enough to stand as a good indication of his exacting nature.

By the time he presided over The Shining, meeting Kubrick’s standard had reached all new levels. Always a director willing to burn film, Kubrick now engaged in endless takes of seemingly insignificant scenes, presumably in order to get the physical demeanor of his actors to match the vision in his head as clearly as the art direction and camera angles did. With this particular film—depicting the gradual but stark descent into madness of the winter caretaker in a snowbound Colorado hotel, a mounting lunacy coaxed along by the supernatural doings in the lengthy hallways and drab rooms—he may have also been simply trying to wear down his actors, pushing them until they exhibited a natural exhaustion in line with the characters they were playing. Certainly, the behind-the-scenes documentary his daughter Vivian shot shows Kubrick verbally berating actress Shelley Duvall with such unbridled maliciousness that it begins to seem like an extension of the punishment her character was facing at the hands of her onscreen husband. He does everything but pick up the ax, and if he ever was casually carting around that on-set prop, Duvall surely must have felt at least a tremor of genuine fear.

As with many of his films, The Shining wasn’t all that well-received at first. It did earn respectable box office, a take in the range of $44 million, double its budget and a sizable sum in a year when only three releases crossed the $100 million mark (current blockbusters are expected to cross into nine digits in their opening weekends). Critics were far less kind, with David Ansen of Newsweek one of the few prominent supporters: his proclamation that it was “the first epic horror film” became a central part of the ad campaign. It surely had its impact, led by the immediate cultural touchstone of Jack Nicholson’s improvised appropriation of the Tonight Show introduction “Here’s Johnny!” as he shoved his crazed visage through the shards of a door he’d just cracked to pieces with his ax. (As someone who’d lived outside of the United States for several years and was somewhat insulated from the pop culture of his discarded homeland, Kubrick reportedly didn’t get the reference at all and had to be persuaded that this was the take that should be included in the film.) 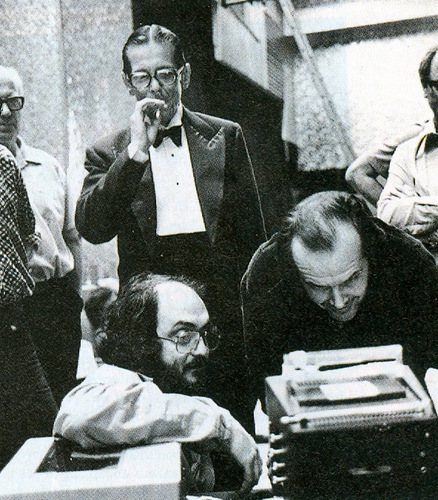 What’s really interesting about The Shining, though, is the long reach it’s had since its release decades ago. Just a few years after it came out, the home video revolution started freezing cinematic pop culture in time. A movie was no longer something that came and went. Instead, it came, went and found a home at some sort of rental outlet in the neighborhood (or, more rarely at the time, in a household collection), forever waiting for someone to revisit it because they were in a certain mood. “You gotta see this,” was no longer a fervent recommendation reserved for something current enough to be threaded through a projector at the downtown movie house. It could mean something from years earlier. And, in some ways, those sorts of suggestions were even more urgent. “What do you mean you haven’t seen The Shining? Oh my god, it’s the scariest movie ever. Let’s go get it, right now!” The movie lingered, always, to borrow from more modern vernacular, on someone’s queue.

As it’s endured into the internet age, the memorable nature of the film, the way certain elements of it practically imprint on the psyche, have made it one of the most inviting targets for those gifted with creative wanderlust. Ironically, the fierce precision of Kubrick, honing scenes down further and further until that are exactly what he wants them to be, has wound up contributing to the astounding malleability of the film. It’s so tight, so controlled, so wound up in its own exacting construction that it can be pulled apart like loose bricks and rebuilt into so many temples of tribute.

One of the first notable tweaks of Kubrick’s film was Robert Ryang’s brilliant reworking of The Shining into a trailer that presented it as a sweet, sanguine romantic comedy called simply Shining. Even the simple alteration of dropping the article from the title changed it from something strange and ominous into a little declaration of hope. Cut to music that seemed wholly at home in a deliberately non-offensive Hollywood offering (including especially ingenious deployment of Peter Gabriel’s “Solsbury Hill,” which had, at the time, been recently used as the background music for the spectacularly nondescript Dennis Quaid comedy In Good Company), Ryang’s trailer traded in on the established knowledge of Kubrick’s film as a force of grueling terror, cheekily cherry-picking the footage to find moments of uncommon sweetness between Nicholson’s character and Duvall’s character instead of the more famous swings of blades and bats. Even the typewritten pages of “all work and no play makes Jack a dull boy” are transformed from a revelation of madness to evidence of nothing more than the harmless frustration of writer’s block.

Ryang’s fake trailer is an inspired gag, but it also provides something more: a glimpse at the way that even a work as indelible as one made by Kubrick can be artfully recreated and misrepresented. A movie trailer is just a sales job, after all, and sometimes the promised great new taste is an evasion meant to close the deal. The widely reviled but useful custom of a movie trailer giving away every detail of a film (often the whole goal of a movie’s marketing campaign is to do little more than reassure the potential audience that the product is going to fulfill rather than challenge their shared expectations) is so entrenched that a trailer that doesn’t follow that pattern but plays a tricky shell game instead is all the more striking. As exacting as Kubrick was, Ryang’s trickery showed that all that precision isn’t a bulwark against even the most ludicrous reinterpretation.

Similarly, the film is not exempt from becoming fodder for the sort of crackpot conspiracy theories that are prevalent on the net, as truth itself is another set of shifting plates. Most infamously, Jay Weidner cooked up a treatise on how the entire film is a thickly veiled confession from Kubrick that he was enlisted by the U.S. government to help fake the moon landing over a decade earlier. Weird little details from the film, such as the shifting of important room numbers (widely acknowledged to have happened at the behest of the Oregon hotel that provided exterior shots for the fictional Overlook Hotel, which wanted Kubrick to use a number that didn’t correspond to any of their actual rooms), are reinterpreted by Weidner as an array of sneaky clues that would make the most hackneyed mystery novelist scoff. This information isn’t just muttered on a street corner or scrawled feverishly into spiral notebooks at home; it’s out there in the digital landscape, in some ways indistinguishable from legitimate interpretations of the art.

Even though The Shining is sometimes turned upon itself, it’s also preserved in the oddest ways. It’s not necessarily held in amber in a manner that’s true to Kubrick’s complete version, but it’s picked apart and held up for tribute. It’s an especially enticing subject for individuals that create animated gifs, taking a few frames from a film (or some other video source) and putting them together into an endless looped animation. Sometimes referred to as cinemagraphs or, in the more elegant phrasing of the Tumblr If We Don’t, Remember Me, “living movie stills,” the tendency is to take the most striking single moments and hold them in subtly shifting place for as long as anyone cares to looks. Jack Nicholson nods lasciviously for all eternity and the effect is both reductive and expansive, simultaneously cutting something vast down to tiny parts and elevating those fragments into their own little works of art, even if they’re merely echoes.

For a filmmaker who had a great command of the technological developments within his field—the sole Oscar win claimed by the visionary director was for his oversight of the special effects of 2001: A Space Odyssey—it’s perhaps fitting that his work is being reshaped by a technology with global reach that exploded shortly after his 1999 death. The authority that Kubrick claimed over his art has been trumped by the unfettered, egalitarian freedom of the web and the different software that helps feed it with new content. The original films still stand and, in many cases, are still duly revered. But there will eventually be more people who know films such as The Shining through the mosaic of their reworkings and reinterpretations. That may even be the case now. The Shining is available through a variety of means, but it takes fewer keystrokes to get to the long shadows the film casts.

One thought on “You’ve Always Been the Caretaker: The Many Lives of Stanley Kubrick’s The Shining”