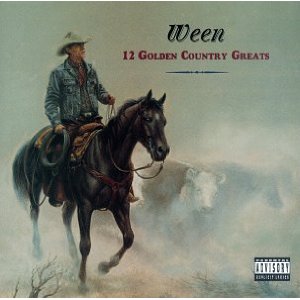 Of all the band that cycled through 90FM when I was a devoted student, I may have tagged Ween as the least likely to succeed, or at least to achieve any sort of sustained success away from the offbeat tastes of college radio. A duo out of Pennsylvania, Ween was comprised of Aaron Freeman and Mickey Melchiondo, redubbed Gene and Dean Ween, respectively. And they were just plain weird. Then came their 2004 album, Chocolate and Cheese, which actually managed a modest crossover hit with the single “Voodoo Lady.” It wasn’t a smash, but any validation of Ween by stations that had to remain safe enough to keep pulling in car dealership ads was remarkable. Whatever expectations Elektra Records, Ween’s label, may have had about the band following up that success by becoming more accessible were undoubtedly dashed when they heard plans for the next record. Ween recorded 12 Golden Country Greats, which indeed emulated classic country music albums, even recruiting venerated session musicians who’d played on those earlier records. Certainly out of step with the grungy nineties, the album was probably too purist to appeal to the country music fans of the day. Even if country radio hadn’t given themselves over fully to an overly glossed up version of the genre, it was unlikely Ween would get a foothold there with song titles like “Piss Up a Rope.” Luckily, there was still a place for them on college radio, and that remained the case all the way through last year’s evident breakup of the band.

59. Various Artists, Songs in the Key of X: Music from and Inspired by The X-Files

This soundtrack was officially released in between the third season episodes “Teso Dos Bichos” and “Hell Money,” for anyone trying to parse out clues to how it might fit into the ornate conspiracy at the heart of the Fox television series The X-Files. Then in its third season, the show was still in the upswing of its popularity and was already big enough to inspire this sort of obvious attempt at snaking in a few extra dollars from those fans that had to have everything. As the lengthy subtitle to Songs in the Key of X suggests, the album isn’t even a proper soundtrack, including material supposedly “inspired” by the series or that the producers would maybe get around to including in an episode in a future season. It seems more like any random person made a spooky mix tape, though it just so happened to be someone who could orchestrate, say, a collaboration between Rob Zombie and Alice Cooper to help fill up the cassette.