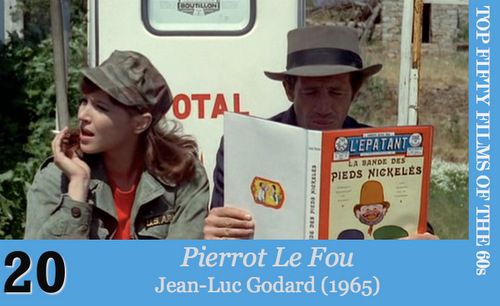 #20 — Pierrot Le Fou (Jean-Luc Godard, 1965)
I suspect the average French New Wave classic is exactly the sort of thing a casual moviegoer pictures when considering the sorts of painfully arty fare that film critics usually champion, the material that would make the typical American ticket-buyer squirm in their seat. If so, they’re not wrong. Much as I love or admire (or occasionally both) many of those films, I can recognize the levels of off-putting pretension that can exist there. Even a some of the films that have made this list are structured with such emotional distance that I’d have a hard time offering a cogent defense in the face of wrinkled-nose response of distaste. Truly, I can’t say that Jean-Luc Godard’s Pierrot Le Fou is exempt from any such categorization–is any Godard film free of dizzying pretension?–but it does strike me as a film that exemplifies exactly why critics and more fervently intellectual cineastes champion the revolution cinema from a certain era in the République française. Top-heavy with experimental technique, it’s also vivid, charming and surprisingly light on in its feet. Its unmistakable American descendants span from Bonnie and Clyde to Moonrise Kingdom, each one of them thriving from the transplanted energy it bestows like beneficent stardust.

It is a crime film of sorts, and also a twisty, twisted love story. It depicts the cool, magnificent, romantically tragic fugitive existence of two individuals seemingly bred to be icons: Ferdinand, played by Jean-Paul Belmondo with his trademark slumped magnetism, and Marianne, played by Anna Karina, at the height of her astonishing beauty. Characteristically, there is clear danger built into the story but very little sense of risk within the spiritual fiber of the film. Godard’s intoxicating style–paradoxically reverent of classic Hollywood narrative grammar while also offering a ruthlessly deconstructionist examination of its inherent flaws and untruths–accentuates the film’s fiction. It is only a movie, Godard argues throughout. These aren’t people talking, they are constructs mouthing slogans, at one point literally. This brand of artifice can be devastating to a film. Godard, ever the magician, makes it quite the opposite. In his hands, abject fakery is an avenue to the greatest truths.

Despite significant risks that the contrary could be the case, Pierrot Le Fou is anything but a tidy, overly precious art piece. Godard could be prickly, in his life and in his art, but his beginnings as a film critic before he was a filmmaker always inform his work. Much as he railed against some of the contrivances of cinema, his art couldn’t completely hide a foundational love of it. In his estimation, every edit was a lie, but couldn’t every edit be an achievement too? Simply another way to crack open the interior of a place, a plot, a people? To unlock the secrets that a long shot, lovingly sustained, could never reveal? Pierrot Le Fou can be seen to make that argument. It radiates all the blissful invention of French New Wave cinema, especially its almost unparalleled sense of artistic freedom. Sometimes lies are truer than truths.