Officially, Eventually was the sophomore solo effort from former (and, improbably, future) Replacements frontman Paul Westerberg. (I actually consider All Shook Down, the final album credited to the Replacements, to be Westerberg’s solo bow, but I’m letting that go for today’s purposes.) It was also the first indication that things weren’t necessarily going to go swimmingly for the flannel-clad Twin Cities troubadour in his solo career, at least from a critical acclaim standpoint. He was regularly and rightly cited as one of the great rock ‘n’ roll songwriters of his generation throughout his tenure with The Mats, and expectations were high that he’d continue one in that vein when releasing music under his own name. I still maintain that Westerberg made about as good of a start imaginable with his first solo single, even if he’s since disavowed the song. And 14 Songs was similarly a promising start. By Eventually, it already seemed he was starting to run out of things to say, or maybe that his escape from the tension of a band, especially one that was fairly dysfunctional in even its best moments, was slackening his creativity. I remember one of my fellow DJs at the commercial station where I worked at the time asking me what I thought of “Love Untold,” the album’s lead single, his tone clearly indicating that he found it disappointing at best. I meekly answered something about liking the lyrical detail of “Checks his sleeve for his ace,” but that was all I had. There are other songs I like well enough on the album, but it was clearly flat beer, and not just when compared against the greatness that came before it. It was drab and unmemorable on its own merits. 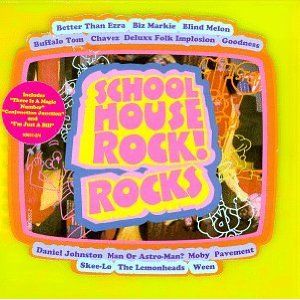 Perhaps the only thing surprising about this tribute album is that no one thought to make it earlier. As I’ve mentioned previously, college radio deejays are uniquely susceptible to covers–nostalgia for a cultural past they very may not have personally experienced simultaneously one of the most adorable and most irritating affections of the American twentysomething–and for those who were in their undergraduate years during the mid-nineties the ditties of Schoolhouse Rock! were foundational. The educational bumpers deployed in between cartoons on ABC’s Saturday mornings were the nursery rhymes of Generation X, so it only made sense to corral a bunch of college rock bands to cover them. Thus, the likes of Pavement, Ween, Moby, Blind Melon and–best of the lot–Skee-Lo (“What’s up, cat?”) took their turns in the studio to offer up fresh interpretations of songs written by Bob Dorough and others on the original Schoolhouse Rocks! team. The results may be the definition of inessential, but it’s hard to deny that the whole endeavor is terrifically fun.