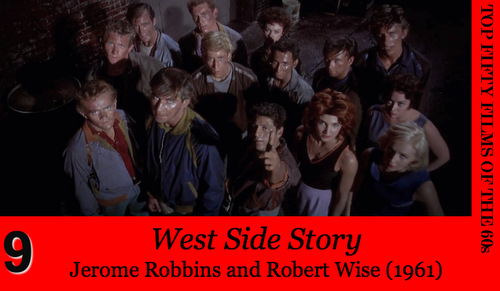 #9 — West Side Story (Jerome Robbins and Robert Wise, 1961)
When I watch the portions of West Side Story over which Jerome Robbins had sole authorship, I wonder if completing the film even would be possible had he been left in charge. The director who presided over the hit stage version of the musical reimagining of the classic Romeo and Juliet story was hired to perform similar duties on the film version, working side by side with Robert Wise, who had an extensive resume but hadn’t previously handled a big Hollywood musical. About a third of the way through the production, Robbins was dismissed, largely because his exhaustive process was sending the film behind schedule and well over budget. By some accounts, this may have been the best possible outcome for Robbins, as the pressure of making the film had him close to a nervous breakdown. It may have also been the ideal development for the film itself because, bold as the Robbins-directed sequences are, a film musical operating consistently at that level of intensity would have been cinema woefully out of balance. Wise was always meant to provide some grounding to the project (it was his work on urban dramas that earned him the job), but it also seems he rose to the levels that Robbins set, albeit with a touch more tempering of the heightened emotions of the piece. Indeed, Wise was a strong champion for Robbins maintaining the co-director credit after the firing, obviously realizing the finished product wouldn’t exist, at least not in its masterfully inventive form, without the both of them.

Maybe in part because some of the fractious dynamics in play–both behind the scenes and in the gang war plot–West Side Story sometimes feels like the last flinging fist of the Hollywood musical, a desperation punch that connects beautifully. So much of the film plays like a refutation of the gala pageantry that had typified the cinematic form previously, from the sequences that play out on the pavement to the brash youthfulness to the most jagged of the details. It’s not simply feuding gangs, but different cultures, the white youth against the Puerto Ricans, the latter group disdained for their supposed invasion of the neighborhood, an assessment occasionally backed up by the authorities that are otherwise the enemy. The work doesn’t shy away from the tensions on this scenario, instead welcoming them as exactly what’s needed to give the entire thing added weight, to make the songs mean something beyond the ingenuity and tunefulness fully expected considering they were crafted by the almost unthinkably talented duo of Leonard Bernstein and Stephen Sondheim. There are stellar highlights among the songs–the infectious “America,” the delightfully goofball “Gee, Office Krupke,” the powerfully-staged “Cool”–each of them drawing greater potency from the narrative elegance of the full work. If previous musicals could sometimes get by with little more than filler from song to song, West Side Story adheres to the notion that everything is improved with care and attention throughout.

There’s also a bracing muscularity to the film, found most noticeably in the fierce dance sequences but also evident in the bravado throughout. If the precious Natalie Wood seem a touch too demure (and, ahem, noticeably non-Latina) to play the lead Maria, then the proof of sound judgment in her casting needs to come through in the performance, making the bit of spreadsheet showmanship into an act of artistic fearlessness. Don’t think the absurd cross-cultural casting can work? Just watch. To pick a metaphor befitting a musical, every note is struck just right, even those that initially seem atonally off. As with the directorial shift that happened early on, every potential problem only leads to a better pathway enlivened by the unexpected. If there was ever a musical that needed to avoid any temptation to play it safe, it’s the one using gang violence and racial conflict as a backdrop. West Side Story, in large part because of its limitless daring, is a film that’s bracingly, blisteringly alive.

One thought on “Top Fifty Films of the 60s — Number Nine”