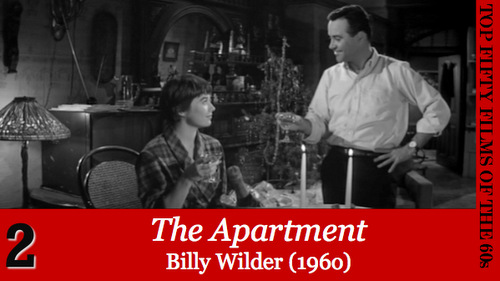 #2 — The Apartment (Billy Wilder, 1960)
Often I have described myself as a cynical romantic (or a romantic cynic, but the other version rolls off the tongue more pleasantly). While there are undoubtedly a multitude of influences that led me to this worldview that’s equal parts wistful and curdled, I’m willing to lay a decent chunk of the blame at the feet of Billy Wilder. I maintain the Austrian-born filmmaker is one of the greatest to earn his living in the wilds of Hollywood, in part because of his mastery across films with vastly different tones–I marvel that the same director presided over Double Indemnity and Some Like It Hot–but mostly because of the bracingly frank appraisal of human nature, often leavened with a dose of wicked wit, that was the common denominator across his filmography. At a time when many of his contemporaries were depicting the motivations and inclinations of people in starkly delineated categories of good and bad, Wilder allowed that it was all more complicated than that, even when he was working with clear heroes and villains. Morality was clear, but it was slippery all the same. And all that leads me straight to The Apartment.

Jack Lemmon, fresh off his shared triumph with Wilder on the prior year’s Some Like It Hot, stars as C.C. “Bud” Baxter, a low-level drone at a New York-based insurance company who starts rising up the corporate ladder largely due to his reluctant willingness to lend out his apartment to corporate executives looking for a discreet place to stage their extramarital trysts, especially once the company’s personal director, Jeff Sheldrake (Fred MacMurray), claims exclusive rights to the space. Complicating matters for Baxter is the little detail that Sheldrake’s latest conquest, Fran Kubelick (Shirley MacLaine), is the woman he himself has been pining for, the elevator operator in the company’s building. Not only does this stir up jealousy and resentment, but Baxter gets firsthand exposure to the way Sheldrake’s heartless exploitation of Fran harms her when a holiday dalliance in the apartment takes a grim turn. That Wilder and his regular screenwriting collaborator, I.A.L. Diamond, manage to keep the film funny and light-on-its-feet despite the fairly dark subject matter is one of the great wonders of the filmmaker’s lively creativity.

Wilder also had a clear sense of the gift he had in Lemmon. The actor possessed a restless craftiness that was ideally suited to Baxter’s uneasy interactions. He takes the unseemly predicament the character finds himself and makes the trip to that point both highly understandable and worthy of great sympathy. Lemmon had a way of artfully playing characters who were beset by troubles without ever letting them become wallowing victims; his sad sacks were oddly winning. There are other fine performances across the film–particularly MacLaine, who makes Fran charming and sweetly lost–but it’s Lemmon who grounds it, making the various conceits of the story into pieces of a real life, remnants of genuine dilemmas. Wilder was deft enough with tone that it’s entirely possible he could have pulled off the necessary balancing act no matter who was in the leading role, but he was shrewd enough to know the likability of Lemmon allowed him to push deeper in the murky corners of his story. This is, at the bottom line, a story about adultery, duplicity, loneliness, depression and attempted suicide.

Finally, what makes The Apartment into something beyond a smart comedy with a blackened inlay is that it is eminently, compulsively watchable. That’s an elusive, almost indefinable quality to celebrate, to be sure. And yet it’s what I return to as its greatest strength every time I sit with it. The conception and execution of the film is so complete–the depth of characters, the establishment of the office and social cultures they move through, the organic progression of the plot–that the whole film becomes a gift. This is how cinema can work when its infused with careful intelligence and depth of feeling. The meaning isn’t imposed upon the work. Instead, it emerges from the convincing totality of it. Watching The Apartment is like living with these characters through a complex and meaningful time in their lives, separately and, for two of them, finally together. When the film reaches its absolutely perfect final line, the satisfaction of it all extends past the usual reach of fiction. It arrives like a blessed outcome for dear friends. It hits the heart, even for–of maybe especially for–a cynical romantic like me.