As I noted in the very first post of this series, I went all in on the Marvel Universe at a particularly fortuitous time. Not only were there several first-rate, sometimes title-defining runs poised to happen (including Frank Miller’s Daredevil, Walt Simonson’s Thor, and John Byrne’s Fantastic Four), but the publisher was expertly raiding its own history to provide classic stories for the same forty cents. I previously mentioned old Fantastic Four stories showing up in the pages of Marvel’s Greatest Comics, and there were also early X-Men tales in Amazing Adventures and, the most successful series of the lot of them, Spider-Man reprints in Marvel Tales. Marvel was built on a rigid adherence to its own continuity, so knowing the history was important. These backward-looking titles allowed me to fill in my own gaps.

One of the titles I picked up that momentous first summer of superhero reading was Marvel Super Action, in part, I’ll admit, because it was a comic that always seemed to have plenty of copies available at one of the convenience stores I frequented to sate my junkie-like habit. Though I didn’t know it at the time, Marvel Super Action began life as a Captain America reprint title before switching to his favored super-team midstream. It actually picked up Avengers reprints relatively deep into the original series’ run, all the better to catch some of more famous issues of the title. Which also meant, as with my introduction to the Fantastic Four (at least in part), I got to know these heroes through the dynamic pencil of John Buscema.

The first issue I bought promised the wedding of the winsome Wasp to a strange new hero who’d shown up the previous month, a brutish, somewhat bullying fellow who called himself Yellowjacket. It was a story whipped up by Roy Thomas, the chosen successor to writer Stan Lee when he started to shifting to more of an overseer role in the late nineteen-sixties. 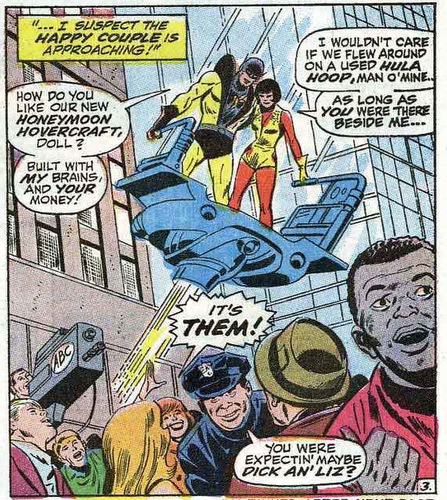 This didn’t sit too well with Janet van Dyne’s teammates, in part because she barely knew this Yellowjacket fellow (they didn’t even know his secret identity!) and also due to the little fact that he claimed to have killed Hank Pym, charter member of the team (as Ant-Man) and Janet’s longtime love. (Their protests, I have to say, seem fairly reasonable.) In some ways, that’s the least of their worries, though, because this is a superhero wedding in the Marvel Universe, which means that bad guys are about to bring it on. In this case, disguising themselves as caterers to gain access to Avengers Mansion.

The villainous tendency to shape their conversation in a very exposition-friendly way is always helpful. Of course, the villains aren’t the only ones who are on premises. The place is lousy with superheroes, too. And all of them are drinking non-alcoholic punch (natch).

There’s enough firepower in that room to test Galactus, much less the far more woeful circus-themed baddies who crashed the party (led by a guy with a hypno-hat). But when the Circus of Crime launches their attack, Captain America effectively tells everyone who doesn’t have an active Avengers card to stand down, pridefully claiming it as their fight. This prolongs the conflict just long enough for Yellowjacket to reveal his true identity: Hank Pym!

This leads to an incredibly convoluted explanation of what happened, involving the accidental huffing of a mixture of toxic chemicals leading to temporary schizophrenia shaped by a fear of commitment. Jan saw through it the whole time (at least from the first smooch on), and choose not to actual help him or be honest with any of her cohorts about the situation in favor of using his warped mind as an opportunity to trick him into matrimony. Good times.

The whole thing was loopy, imaginative and illogical to the point of being borderline nonsense. And I loved every bit of it, for all of those reasons. When I try to pinpoint what’s wrong with dour modern superhero comics, the key problem is that the sense of freedom and fun that characterizes this issue is long gone. That doesn’t mean these comics were unquestionably great. The very next issue was such a muddle of Asgardian myth and Dr. Strange’s conveniently sporadic magical abilities that the only thing I retained from it was the dual splash pages that opened the story. But what splash pages they are.

I stared and stared at those Buscema drawings as if they alone held the secret to why I was suddenly a helpless devotee to Marvel’s superhero comics. And maybe they in fact did. Excelsior, indeed!

8 thoughts on “My Misspent Youth: The Avengers by Roy Thomas and John Buscema”