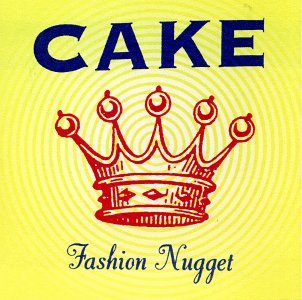 Among college radio kids in the mid-nineties, there was a pretty healthy market for songs that took critical aim at their own music fandom. For example, Ben Folds Five first got noticed with “Underground.” In the case of the Sacramento, California band Cake, their opening salvo against the very consumers they were actively courting was even more scathing. “Rock ‘n’ Roll Lifestyle” had a clear novelty bend but was also catchy as hell, exactly the sort of thing that can often take hold on the college charts. It helped them get signed by Georgia independent label Capricorn Records, which rereleased their debut album, Motorcade of Generosity. It was the band’s sophomore effort, recorded at the behest of the label, that brought them major success. Fashion Nugget had a slightly more polished sound (the benefit of working with a supportive label) and, more notably, a single written by guitarist Greg Brown that practically defined the band. “The Distance” was one of those seemingly unavoidable songs during the fall of 1996, becoming Cake’s sole Top 40 single (albeit just barely, peaking at #35). Surely there were other songs getting college radio airplay (and a killer cover that required a special radio edit), but “The Distance” got played as often on some station’s as their top-of-the-hour legal ID bumpers. Cake hasn’t exactly been prolific, with only six albums across twenty years, but they have endured, and without much hint of break-up drama. In fact, their most recent effort, 2011’s Showroom of Compassion, managed to become their first chart-topper, debuting at #1 on the Billboard album charts. Now, it did so while setting the record for the weakest sales numbers to claim the top spot on the weekly chart, but a #1 is still a #1.

I’ve typed out a lot of fairly unkind words towards a signifiant number of albums on this particular countdown. Credit where it’s due: Beck’s Odelay is undoubtedly a better album than any of releases that topped the year-end 90FM chart during my time at the station. Bek David Campbell’s fifth album overall and his second for a major label, Odelay, is a stunner, offering a melding of old-school soul with modern pop sounds while simultaneously deconstructing everything he’s built. It’s cheeky, unpredictable, and incessantly catchy. It even made me momentarily believe in the possibility in the Grammys, when it became an unlikely Album of the Year nominee, only to lose to some hideous Celine Dion abomination, therefore safely restoring my cynicism. It wasn’t just the Grammys; the album was enough of a wide-ranging success that Beck kept turning up in the strangest of places. If it was a breakthrough, it was a highly deserving one. There are off-kilter gems all across its running time. It was exactly the sort of album I valued most during my college radio days: wherever the needle was dropped (or, by the nineties, the laser was directed) there was something good there, and usually something distinctly different. Arguably, it also established a tough benchmark for Beck. He remained and remains a justly respected artist, but the sonic revolution of Odelay made everything that followed sound drab in comparison, at least until the soul-bearing about face of Sea Change, which mostly matches its predecessor by refraining from any attempts to replicate its tricks. So, yeah, 90FM kids of yore, a lot of what you were playing makes my ears hurt just thinking about it, but you couldn’t have done better with the album you played the most.