As I believe I’ve noted before, I know exactly which Marvel Comics publications I bought when I first committed myself fully to the House of Ideas and the superheroic endeavors they conveyed. To a degree this is due to my memory sharpening for such a momentous occurrence (as ridiculous and embarrassing as that assertion may be, it is true that I consider that instance in my life to be defining), but it’s also from the handy presence of a banner ad across the top of all the front covers that month, promising, “THIS MARVEL COMIC COULD BE WORTH $2500 TO YOU!” If nothing else, it gives me a convenient way to double check my recollection. Was Marvel Two-in-Annual #5 really one of the first comic books I bought? Yep!

I know for certain that the first superhero comic I purchased in this era was Fantastic Four #222, and I immediately fell hard for Marvel’s first family, especially Benjamin J. Grimm, also known as the ever-lovin’ blue-eyed Thing. If he was in a comic, I wanted it. And it just so happened that he was starring in a spin-off title at the time, the cumbersomely named Marvel Two-In-One. Before I even saw a single copy of the regularly monthly mag, I got my hands on a copy of that year’s Annual, Marvel’s double-sized special issues that came out in the summer, presumably because kids had more time to read and more spending money to buy things to read. It cost seventy-five cents, so the necessary investment was significant for me.

As with most stories found in the pages of Two-in-One, which routinely teamed the Thing was another hero from the Marvel universe, there were complicated contrivances to bring the two titans together. In this instance, it was the Hulk tapped to co-star, so writer Alan Kupperberg had the Thing’s fantastic teammates felled by exposure to gamma rays, which just so happened to be the expertise of Bruce Banner, the scientist who transformed into the green goliath when angered. Simultaneously, Banner’s cohorts were similarly afflicted by an unexpected blast of cosmic rays, the instigator of powers in the Fantastic Four. 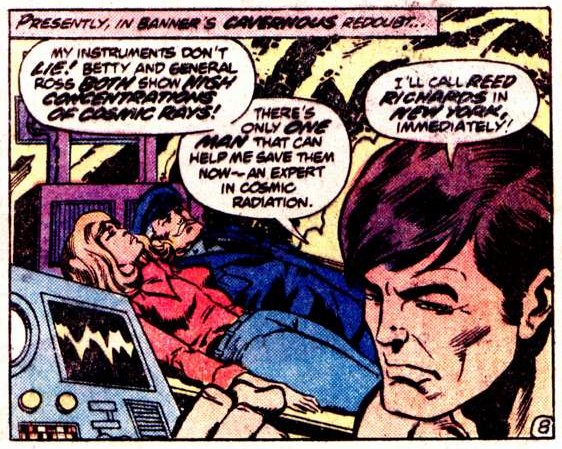 This wasn’t just happenstance. Instead, it was a result of the mighty machinations of interstellar superbeing the Stranger. Needing the brute strength of the Thing and the Hulk at his disposal to take on Pluto, the ruler of Hades, the towering sorta-villain was essentially creating hostages that would help him forcibly recruit his foot soldiers. Naturally, the Thing wasn’t appreciative of the idea, if only because of some understandable skepticism about the godlike celestial figures he kept encountering. 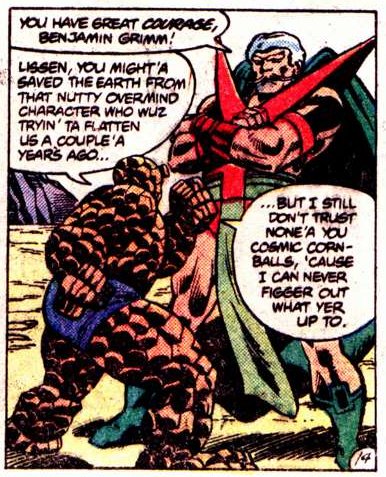 The battle against the Overmind Ben references is from a multi-part Fantastic Four storyline that unfolded nearly ten years earlier. And yet it was also a storyline that I was then engaged in reading, thanks to its concurrent publication in the reprint title modestly monikered Marvel’s Greatest Comics. This is not an insignificant point. A major reason I became so devoted to Marvel was the interconnectedness of the stories. It thankfully lacked the level of impenetrable overlapping that too often infects their line today, but there was a strong sense that every title, every story, every last panel, was part of the bigger picture of the Marvel universe. It wasn’t necessary to read it all to understand it, but there was greater satisfaction to be found in knowing it all. In this instance, Marvel conspired to make sure I could feel I was getting the referenced part of the larger story that took place years earlier. It’s probably equally possible that it was a fortuitous coincidence. Either way, it was a publishing model that fostered addiction, and I thrillingly infected myself with the passionate need to consume all of it.

Also, they understand the importance of never bypassing a chance to have the Thing and the Hulk duke it out. That mattered, too. 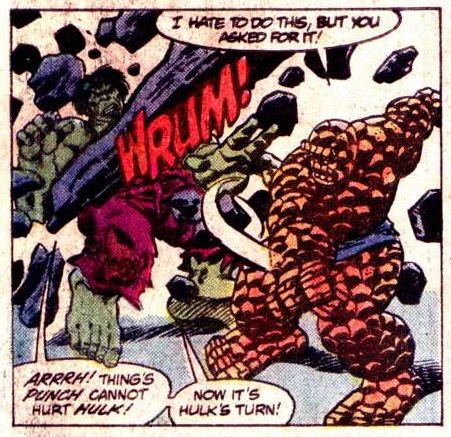 The art, roughed in by Kupperberg and finished by Pablo Marcos, didn’t exactly dazzle, but it adhered nicely to the solid house style of the time. That in itself was helpful in easing my entry to superhero fare. Like the rigid uniformity of the visuals across the multitude of, say, Richie Rich comics that had previously claimed my pocket change, the approach delivered the implicit promise that any comic I decided to sample would be safe and sturdy. The Thing wasn’t going to be unrecognizable to me, no matter where I found him.

Like all of the comics I bought those first few months, I read this to near-tatters (I wasn’t yet a zombie-eyed adherent to idea of protecting the mint condition of the books at all costs, but I certainly got there). I don’t know that I necessarily loved the story all that much. There was an enduring satisfaction to it, though, as if happy nostalgia set in right away. It assisted in an inner change. For at least the next several years, the spinner rack or its equivalent in a variety of grocery stores and comic shops, would compel me toward it like sugar attracts ants. Hey, I could have had far worse habits as a kid. 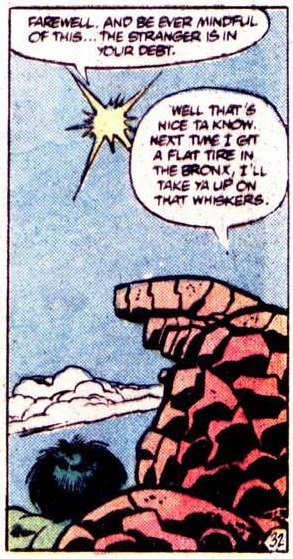