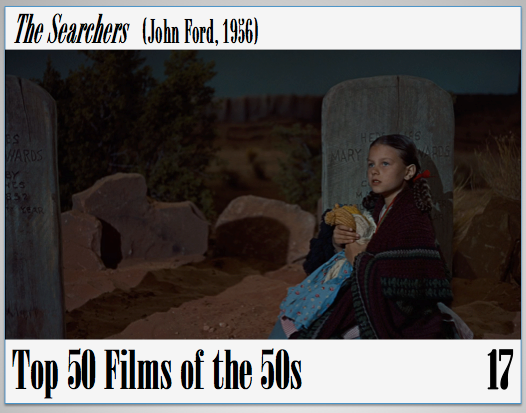 #17 — The Searchers (John Ford, 1956)
Westerns, long a staple of Hollywood filmaking, were absolutely huge in the post-War years. According to Glenn Frankel’s book on the making of The Searchers, by the time John Ford’s iconic film was released, in 1956, westerns accounts for about one-third of all major studio movies and as much as half of the slate of the independents. Surely the satisfying simplicity of a traditional good guys versus bad guys narrative had something to do that in the new reality of the nation pressed into position as the center cog in the complex geopolitical gears. And yet the surplus of westerns meant that the satisfying simplicity couldn’t last for long. Shadows crept into all those frontier towns, and the more skilled filmmakers were bound to start deconstructing the most familiar narratives, if only to stave off creative boredom. Other films from the nineteen-fifteens contain inklings of the major rending of the western that would arrive in the next decade, but none anticipate it with such simultaneous force and stealth as The Searchers.

Now clearly anointed as Ford’s greatest film, The Searchers tells the story of a grizzled gunfighter on an extended quest to retrieve his niece from the Comanches who abducted her as a child. Adapted from an Alan Le May novel and with origins in the real-life tale of Cynthia Ann Parker, the movie’s plot is positioned as the most standard of Hollywood oater fare, complete with ample excuses to point the camera at stunning landscapes, taking full advantage of the Technicolor VistaVision technologies meant to help differentiate cinema offerings from the upstart television. Despite its veneration as a great work of art, every time I watch The Searchers I’m struck by all the ways it expertly adheres to expectations of how this sort of entertainment offering works. The comic relief, the shape of the relationships, the individual scenes all have a familiar rhythm. That’s likely attributable to Ford’s easy command of film narrative at this point (he’d been making movies for almost forty years by the time he leaned back in this particular director’s chair), which would make developing a story as second-nature as driving a car. Regardless of how easily it came to him, that sturdiness of story lends greater impact to the sly, inspired ways that The Searchers is pointedly different from the norm.

With these older films, the modern habit is to ascribe intent that may not have been present in filmmakers who churned out pictures like woodworkers craft benches: with a sense of artistic price, but not necessarily aspirations towards nuanced permanence. It’s clear, though, that Ford wanted to shape the depiction of the Native Americans with a different approach. That may have been less due to political considerations or empathetic cultural sensitivity and more as a way to distinguish the work, especially since the resulting film doesn’t exactly come across as radically enlightened. Instead, Ford’s corrective for past cinematic sins shows up most clearly in the implicit judgment the film levels agains the bigotry of the lead character, played by Ford stalwart John Wayne. Ethan Edwards detests the Comanches that he tracks, endeavoring to understand their rituals and traditions only so he can use the knowledge to render the greatest indignities he can muster in battle and the aftermath. He’s a former Confederate soldier (the film’s story begins just a few years after the Civil War), and he carries the bitterness of defeat with him. Much of the character’s stubbornness is recognizable from any number of other western heroes, in films that tend to depict the quality as an admirable expression of rustic masculinity. In The Searchers, the same ethos is a pathway to devastating loneliness, a mandate to stand outside a culture that is prepared to move on without him, as exemplified by the famous final shot that transforms the triumphant exit into the sunset as a march of defeat. It’s a closing visual statement that allows for parallels aplenty, but it’s not solely the symbolic possibilities that make it powerful.