When I was reading comic books as a kid, a superhero making the jump to some other form of media was a rarity, and often more notable for kitsch appeal than blockbuster status. The pop culture landscape of today would boggle that little whippersnapper’s mind. By the time I got to college, I mostly preferred to keep my comic-reading habit under wraps, especially when it came to material that I thought smacked of silliness. I still recall being relentlessly mocked by a friend of mine when he spotted me reading an issue of spin-off limited series featured the First Comics character the Badger (months later, he’d ask me out of the blue, “You still reading that Badger Berserker?”). So it struck me when someone else, especially someone considered the epitome of cool around our campus radio station, openly declared affection for a comic book story, as happened one day when the host of our weekly blues program, Sneaky Pete’s Blues Cafe, expounded on the joys of comic book from the height of Marvel’s nineteen-seventies go-for-broke lunacy. He said he owned only one comic book, because when he read it he realized he’d discovered the unbeatable apex of the form. That comic book was, he explained, “The issue of Super-Villain Team-Up where Dr. Doom fights the Red Skull on the moon.”

Now, it was clear from his succinct description — which he presented as a statement so matter of fact that he may as well have said, “I find it useful to breathe oxygen” — that the kitsch factor was part of the appeal. That had honestly eluded me before, leading to the clandestine nature of my comic book habit and an ongoing angry insistence that anyone who denigrated the form was closed-minded and just needed to read Maus already (I still kinda stand by that last point). My eyes were opened, if only by a bit. It would still be many years before I fully committed myself to a unashamed celebration to all that was beautifully batshit insane about many of the comic books published when I was a kid. Naturally, I chose that time to seek out the issue of Super-Villain Team-Up that was once cited as a favorite by a guy none of us would have ever termed as nerdy.

From the very beginning, Super-Villain Team-Up was a nutty idea for an ongoing comic book. Adopting the conceit of the relatively recent, Spider-Man-starring hit Marvel Team-Up, the title mostly featured Dr. Doom and Sub-Mariner, the latter coming off the recent cancellation of his own title. Indeed, a decent number of panels were devoted to tying up stray plot threads from the Atlantean monarch’s series. By issue #12, the one that has the moon as its battleground, Sub-Mariner was edging out of the picture and Dr. Doom was turning his malevolent attention to the Red Skull. And any enemy of the Red Skull is a friend of Captain America.

Surely there could have been no greater pleasure for a writer at Marvel Comics in the nineteen-seventies than to place dialogue in the mouth of Victor von Doom, rightful ruler of Latveria and easily the greatest super-villain ever created. Bill Mantlo demonstrates that wonderfully by having Doom call Captain America a dolt in one panel and feign tender offense in the next. The “why” of the story doesn’t really matters. All that’s important is that Dr. Doom is bound for some outrageous fisticuffs on the surface of the moon, facing off against that lingering proponent of the Third Reich, the Red Skull. Even as Doom approaches, the Red Skull is preparing in his lunar lair, tended to by the glummest boot steward imaginable.

The battle itself doesn’t have the jaw-dropping dynamism of foundational Marvel artist Jack Kirby, but it rendered in the solid house style of the day by Bob Hall. The more stylized, individualistic approaches can work wonders in modern comics, but there was a certain appeal to a stable of artists with the shared primary goal of subsuming their quirks in the service of a uniformity across the line. Hall was serving the story more than his pencil’s wanderlust. Besides, how much embellishment is needed with fearsome foes such as these, true believer?

As with any great bout, lo, there shall be an ending. In this case, the victor is the guy who starts with that name in the first place. 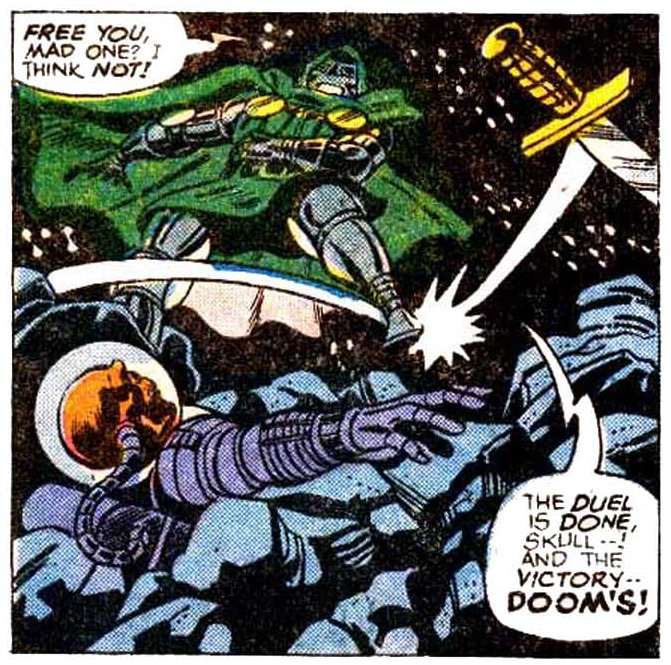 So the Red Skull was defeated, though probably not for long. There wasn’t long left for Super-Villain Team-Up either. It lasted two more issues before cancellation, then returned about a year later with an issue that contained a couple reprints. That was followed by a couple more one–offs, the last two issues under that numbering published a year apart. It was all reportedly done in an effort by Marvel to prevent their Distinguished Competition from using the term “super-villains.” Hardly an example of the highest artistic integrity inspiring publishing decisions, but the publisher certainly had it in them to stoop lower.

Dr. Doom vs. the Red Skull on the moon may not have wowed me quite as thoroughly as my old radio cohort, but I did see the crazy charm of the story. If the characters can, by design, go anywhere, why not take them to the farthest reaches the imagination can muster?

19 thoughts on “My Misspent Youth: Super-Villain Team-Up #12 by Bill Mantlo and Bob Hall”