And here we come to the end of another year. Though I tried to keep up with new music without the outside impetus of a website compelling me to write record reviews, I definitely fell behind. That’s led to a lot of cramming in the past few weeks and a tally I will present with the shakiest of conviction. Except for the work of art at the top of the list. That’s the best album of the year. I have no question or qualm about that. 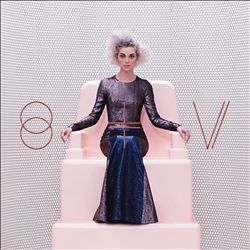 1. St. Vincent, St. Vincent — This what Annie Clark has been building to all along. Her fourth album under the St. Vincent moniker (not including her collaboration with David Byrne, which exacts a clear, mighty influence on this record) is a spectacular reinvention of pop music, Clark’s elegant, deceptively tough guitar playing swirled into strange electronic sounds and driven by elastic, oblong rhythms. Every bend the album takes is a new provocation, but it’s no distancing art piece. It’s vibrant, approachable, and relentlessly catchy. While I’m lauding the achievements of Clark in this calendar year about to close, let me state for the record that, though I’d normally be adamantly opposed to the sort of cash-in appropriation of past efforts such a tour would represent, I’d be first in line to go see NirVincent in concert.

2. Angel Olsen, Burn Your Fire for No Witness — Angel Olsen’s stark, penetrating songs are anguish set to music. With her rich, evocative vocals, Olsen often sounds like she’s just barely dragging herself across the threshold to emotional safety, the simple act of enduring itself a triumph. The romanticism of misery that usually informs such songs is stripped away, leaving a brutal, inspiring honesty, a sense compounded by the airy, quietly echoing sound that makes the album sound as if it was recorded inside of a broken heart. 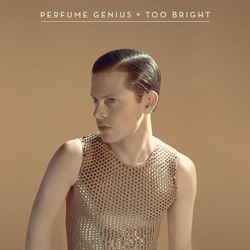 3. Perfume Genius, Too Bright — I found the prior efforts of Mike Hadreas under the guise of Perfume Genius to be a tad too precious, making me wonder if it he had it in him to create music that really cut deep. Well, he showed me. Too Bright is sophisticated and sonically surprising while delivering songs that buckle with resonant ache. With a lovely, delicate delivery, Hadreas sings his lyrics with the blessed relief of confession. For all the fragility built into it, the main impression the album leaves is one of spiritual durability.

4. White Lung, Deep Fantasy — The racing, powerhouse guitars. The hard punch of the drums. The confrontational lead vocals of Mish Way, alternately snarled or shouted. This is a record genetically engineered to bore into my wearied teenage punk rock id and defibrillate it back to life. From the opening riff, I am rapturously happy. Adding to the hit-and-run joy, not a single track even scratches near the three-minute mark. As it should be, dammit.

5. Real Estate, Atlas — The tender, mellifluous pop songs that fill Atlas are the work of grown-ups, wise and relaxed. Yearning doesn’t need to be tragic, and disappointment doesn’t need to be devastating. Sometimes these feelings are simply another gateway to explore the self, finding casual beauty in the act of just being. Without pressing, the music is consistently smart and complex. It has the inquisitiveness and assurance of a band on the cusp of making their masterpiece.

6. FKA Twigs, LP1 — The full-length debut of FKA Twigs is bendy and experimental, as if it’s groping its way towards an unattainable stability as it goes. At times, the result is so transcendent that it sounds like a freshly born universe of sound unfolding, new layers emerging at the speed of thought. Tahliah Barnett’s vocals have some of the ethereal quality of Kate Bush, which makes the frank explicitness of the lyrics all the more striking. Even when it wavers, LP1 approaches the monumental. 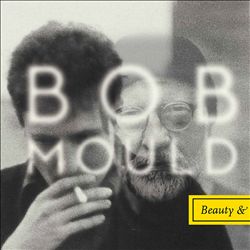 7. Bob Mould, Beauty & Ruin — The old punk rocker who’s lived a hundred lives settles into his elder statesman phase. Beauty & Ruin and its immediate predecessor, 2012’s resounding Silver Age, make it exceedingly clear age doesn’t need to dull the creative instincts. Every lesson Mould has learned, everything he has done and made is pressed into the passages of this album. He has nothing left to prove, and the pure pleasure of creating for nothing more than the sake of it is present in every last note.

8. The War on Drugs, Lost in the Dream — I swing back and forth on this album, finding it engrossing on one listen and meandering on the next. I change my mind about what it sounds like with equal frequency. Right now, I think this is the record the Waterboys would have made if Mike Scott had been raised alongside Bruce Springsteen in New Jersey. That description means the album belongs in my top ten.

10. Lykke Li, I Never Learn — Lykke Li delivers a more languid, reserved version of her brand of dense pop music, befitting an album informed by romantic catastrophe. It may be quieter, but it’s no less affecting than her previous efforts (Li sees this as the close of a trilogy). Like many of the albums on my list this year, I Never Learn is a work of meticulous craft.