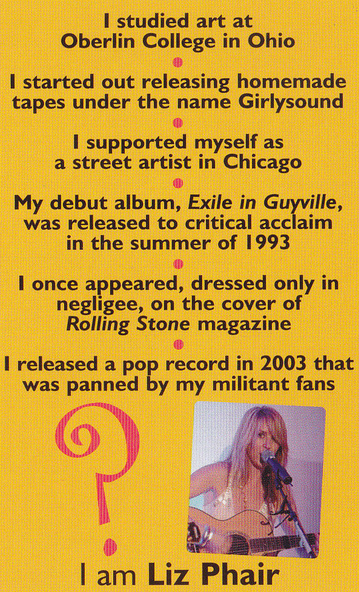 This is how I saw it: Liz Phair needed to reclaim some of the energy that surrounded her out-of-nowhere indie sensation debut, Exile in Guyville. By most measures, her follow-up effort, Whip-Smart, was an even greater success, climbing higher on the album charts, selling more copies (at least initially, though Exile in Guyville has outpaced it by now), and yielding a couple of decent modern rock radio hits. But her coolness quotient took a pretty sizable hit. She became a Rolling Stone cover girl instead of a Village Voice icon. That’s not inherently bad — and there are plenty of indications that Phair craved big-time stardom rather than cult heroism — but the singer-songwriter’s brand was built on a certain confrontational outsiderness. That part of her aura was fading. So just shy of one year after Whip-Smart, Phair released the EP Juvenilia.

Juvenilia was essentially an over-stuffed single, led by “Jealousy,” from the Whip-Smart album, and including a cover of “Turning Japanese,” recorded with Material issue, the sort of quasi-ironic take on a familiar song that was like catnip to college radio programmers. The rest of the EP is comprised of early, demo-ish tracks, some of them previously released on the Girly-Sound cassettes that got Phair noticed in the first place. “California” is one of those songs, a seemingly tossed off, playful original infused with the spirit of utter freedom that often travels with amateur creativity. I’m not one of those listeners who gets irritated any time an artist strays from the relatively humility of their beginnings (hell, I think Phair peaked with the first album that really raised the ire of her early fans), but I have to admit this material lands more nicely in my ear than a lot of other Phair tracks that shuffle up on the magical radio station I’ve built in my iTunes.

(Disclaimer: It appears to me that Juvenilia is out of print as a physical object that can be procured from your favorite local, independently-owned record store in a manner that will compensate both Phair and the proprietor of said store. And the folks at Matador Records, for that matter. I’ve got no beef with them. So I share this not to divert commerce from worthy individuals and entities, but instead to offer the reminder that Phair has some good stuff that is worth purchasing, which is easy to forget since it’s been so long since the broader music cognoscenti has been excited about her music. Any of her first three albums is worth the dollars necessary to acquire one or all of them. So, yes, no harm meant. Still, I know the rules. I will gladly and promptly remove this is asked to do so by any individual or entity with due authority to make such a request.)

2 thoughts on “One for Friday: Liz Phair, “California””