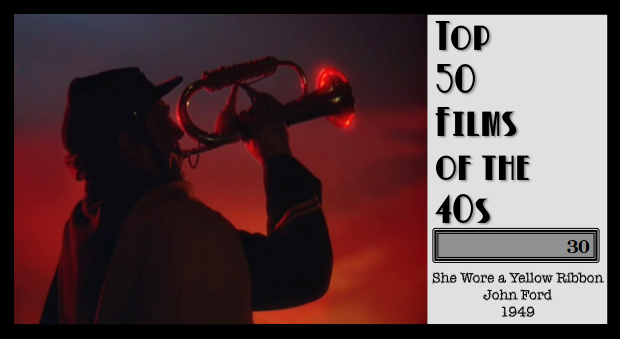 One of the pleasures of examining the long swath of Hollywood film history is considering the ways in which the long-lasting masters of the form adapted to the technological changes that came their way. She Wore a Yellow Ribbon was not John Ford’s first film in color, but it virtually quivers from the great director’s efforts to construct his film visually with all the possibilities that Technicolor had to offer as the nineteen-forties were drawing to a close. Like few of his contemporaries, Ford used the screen the way a master painter uses a canvas. While always remaining virtuous to the base requirements of his narrative, Ford typically found the most striking, moving, wise way to frame his shots, building uncommon beauty into his cinema. This was especially true of his westerns, when the vistas of untamed America provided the richest clay imaginable for Ford to metaphorically sculpt. What’s more, the directness that often came with westerns suited Ford’s storytelling preferences. There’s subtext there for those who want to search for it, but the moral quandaries are front and center in a meaty, satisfying way.

She Wore a Yellow Ribbon was the second of what is referred to as Ford’s “Cavalry Trilogy” (preceded by 1948’s Fort Apache and followed by 1950’s Rio Grande), a group of films that put John Wayne into that particular uniform. Wayne plays Captain Nathan Brittles, who’s time presiding over a small post is nearing an end thanks to his pending retirement. He is given the storied last mission: quelling the mounting tension of Cheyenne and Arapaho tribesman following the defeat of George Custer and his men at Little Big Horn. There’s also the necessary subplots revolving around romance as Brittles and his men are also charged with transporting some women, the wife and niece of the commanding officer, to a stagecoach to take them on a journey east. The crux of the film, though, is that struggle against a changing terrain as the nineteenth century shuffles to its close.

In many respects, the film anticipates the more elegiacal westerns that would begin to appear in the following decade and would reach their peak prominence in the nineteen-sixties. Much of the film’s emotional weight is carried by the sense that a certain era is closing down, exemplified by the Brittles preparing to leave active duty. Wayne was still a relatively young man at the time — he turned forty-two that year — and it had been a mere ten years since Ford’s Stagecoach made him a major star. What must have looked like the actor stretching himself at the time of the film’s release now looks like the earliest manifestation of a preoccupation with rapidly passing time and looming mortality that would mark some of the finest works and performances in the latter half of Wayne’s career. She Wore a Yellow Ribbon succeeds on its own terms, but I suspect it endures because of the way it’s a pivot point in the filmographies of both Ford and Wayne, establishing some of the themes that would solidify in future classics The Searcher and The Man Who Shot Liberty Valance. By 1949, the director and the movie star had already accomplished so much. She Wore a Yellow Ribbon demonstrated they were prepared to approach their work together with the fervor and commitment of people who still had something to prove.