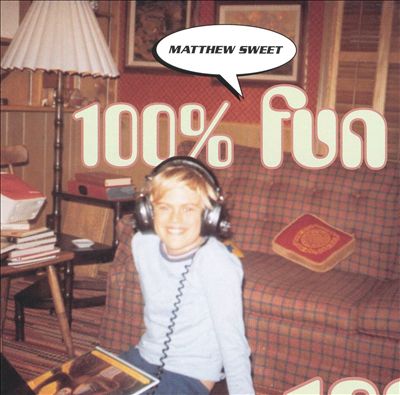 Matthew Sweet was probably alternative rock’s official King of Power Pop in 1995, not that there were many combatants for that particular throne. Sweet bounded from obscurity to the upper reaches of the college charts a few years earlier, upon the release of his brilliant 1991 album, Girlfriend. With a big guitar sound and deliriously catchy hooks, Sweet scratched an itch most college programmers (myself included) didn’t even know they had, sending legs thumping as joyously as that of a dog whose human pal has found just the right spot behind the ear. This underserved subsection of the music scene so thoroughly belonged to him that when the band Velvet Crush released Teenage Symphonies to God, in 1994, that the music press rapidly and repeatedly cited Sweet’s involvement as producer as proof enough of the album’s legitimacy. Unfortunately for Sweet, things were shifting out of his favor by the middle of the decade. Grunge led painfully and inevitably to nu metal, meaning there was little room for the musicianship needed to craft power pop gems. If Sweet was doomed to one final burst of commercial significance, he at least had a dandy last hurrah with 100% Fun.

It’s unreasonable to expect Sweet to again reach the pinnacle of Girlfriend. 100% Fun is the closest he ever came. Lead single “Sick of Myself” can even make a claim to standing just behind the title cut to the earlier release in the procession of the performer’s very best songs. It also serves as the introductory thesis to the whole album, merging self-deprecation with lovelorn testimony and smashing it together with pristinely produced music. Sweet’s romantic cynicism is even more clear a couple tracks later, when “We’re the Same” notes the commonality arises “When we fail in each other’s eyes” (it’s also present “When we shine in each other’s sky,” but there’s still some pretty downbeat assessments of the relationship dominating the lyrics). Just because the music is pretty as can be doesn’t mean the sentiment of the words automatically has to follow suit, and Sweet gets a lot of mileage out of the contrasts he creates. That friction is usually within an individual song, though it occasionally twinkles into being through the progression through the tracks, as when the melancholy “I Almost Forgot” (“You would never turn around/ You’re laughing at everything that’s bringing me down”) presses up against the odd, thick, punchy “Super Baby.”

There are times when the album almost gets away from him, as if the temptation of label-funded studio time proves to be too much. The layering on “Everything Changes” distracts from the delicacy of the song, and “Lost My Mind” eventually swirls into a psychedelic freakout that comes across as a little ill-suited to Sweet. His craft is refined enough that songs are best served by a little more directness, just a touch of tenderness. I’m fond of the comparatively lean intro on “Walk Out,” which is reminiscent of a less ethereal “Under the Milky Way.” Sometimes when a performer is cracking his heart wide open, music that’s a little more unadorned best suits the material, something Big Star always understood no matter how lavish their tones could get. When Sweet sings “We tried to win/ At a game that has no winners/ We tried to learn/ When nothing can be understood,” on “Come to Love,” the chiming grind of the music provides the needed underscore of certainty.

As noted above, Sweet never quite reached this level again, either creatively or commercially. Radio was starting to lose interest by his next album, 1997’s Blue Sky on Mars. Sweet has tried a bunch of different approaches in the years since, including joining up with Pete Droge and Shawn Mullins to form the super(ish)group the Thorns and recording a bunch of covers albums with Susanna Hoffs.