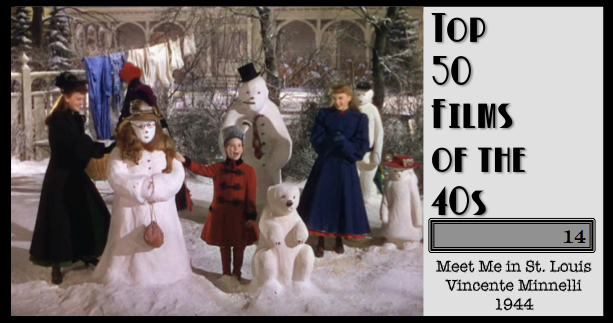 By the time I was paying attention, “Have Yourself a Merry Little Christmas” was a holiday standard. The song, written by Hugh Martin and Ralph Blane, has been recorded countless times, usually presented as a sentimental ode to the joys of of the Christmas season, the tender melody imbued with sedate good cheer. That’s partially attributable to finessing done to the lyrics over the year, but I still found it remarkable, even jarring, when I first experienced the song in its original context, as one of the numbers in the movie musical Meet Me in St. Louis. It is no kind-hearted ballad. Instead, it’s sung by Esther Smith (Judy Garland) to her young sister Tootie (Margaret O’Brien) in a vain attempt to cheer her up as the family is experiencing their last Christmas in the Midwestern city they adore before being unwillingly trundled off to New York due to the professional needs of their businessman father (Leon Ames). Esther’s stab at soothing her sister doesn’t work, in large part because Esther’s own sadness seeps though. Tootie responds by racing out to the wintry yard and attacking the snowmen that represent her fellow family members with murderous rage.

My transformed view of “Have Yourself a Merry Little Christmas” is emblematic of the ways in which Meet Me in St. Louis upended a lot of my preconceptions about films of a certain era. I first saw Vincente Minnelli’s musical early in my college career. At the time, I approached classic cinema reluctantly and with some skepticism. I viewed it as a personal shortcoming rather than some elitist badge of honor, but I was wrongly convinced that many older films — much of classic cinema — didn’t speak to me, that I was ultimately too moored to my modern expectations to properly appreciate more foundational works. Some of the truly towering works could send me into the same inner reveries as the favorites that were released closer to my generation, but I saw those as exceptions, easily dismissed as unrepresentative of the more stuffy and staid features that, to my stupidly blind eye, typified creaky old Hollywood as revived on cable superstations during sleepy weekend afternoons. I cite Meet Me in St. Louis as one of the first films that struck a devastating fault line across that feeble assumption.

In some ways the film is exceedingly simple. Joining the lives of the Smith family as they and their fellow St. Louis residents happily anticipate the 1904 World’s Fair, the film traces their various modest conflicts and sweet flirtations, all leading up to the rending crisis of needing to leave the place that is their defining home. Based on a series of short stories by Sally Benson (that were later lassoed together into a novel), the film is naturally episodic, which makes it all the easier to slip in the songs, including the other signature number “The Trolley Song.” That doesn’t make the film feel manufactured or forced. Under Minnelli’s vivid, lively direction, quite the opposite is true. It is buoyant and witty and deviously wise. It is exuberantly free in a way that the younger version of me found completely surprising. By now, I realize there’s nothing startling about greatness being found in films with a copyright date much earlier than my own. That doesn’t make the pleasures of Meet Me in St. Louis any less profound to me. Indeed, freed of my confining notions, I can see the film more clearly for what it is: a career peak from a masterful director.