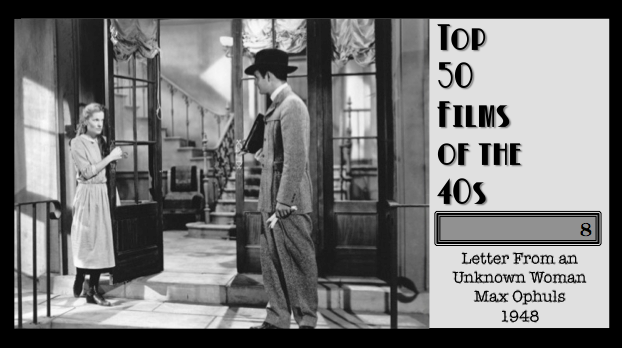 Max Ophüls worked on five films during his aborted tenure in Hollywood, including Vendetta, which would have been his U.S. debut had he not been fired from it (one of several directors who passed through the troubled shoot). The moody, elegantly visual style favored by the European director fit awkwardly into the stateside model, even as it had obvious connections to the deliberate film noir approach that prevailed at the time. His movies were too deliberate, too cerebral, too firmly serious to truly succeed in a U.S. market that, even then, was chained to more slam-bang entertainments. Of course, commercial success doesn’t speak to quality, and Ophüls made amazing cinema when he had the resources of the biggest movie factory town at his disposal. Letter to an Unknown Woman arrived right in the middle of that five film stretch. I’m not familiar enough with the director’s professional biography to know whether he was feeling empowered or pressured at this point, supported or abandoned by the power structure that hired him. What I know — or believe, to be fully accurate — is that he made a masterwork.

Adapted, it seems somewhat faithfully, from a Stefan Zweig novella, the film zeroes in on the enduring heartache of Lisa (Joan Fontaine). When introduced, Lisa is a girl verging on womanhood. She lives in Vienna, in an apartment building that has recently acquired a new resident: a musician named Stefan (Louis Jordan). She becomes obsessed, pining after the oblivious bon vivant. The rest of the film traces the way the pair slip in and out of one another’s orbits. More importantly, it intricately, empathetically traces the emotional impact of those encounters, especially once Lisa gets the briefest of glimpses of the life she’s dreamed of, only to have it cast away as a result of Stefan’s callous entitlement. The title of the film refers to dispatch Lisa eventually sends in one last, tragedy-tinged attempt to imprint herself upon Stefan’s life.

The mechanics of the story recall any number of other Hollywood entertainments pitched squarely at a female audience with a cold certainty that spilled tears is the outcome those fairer ticket-buyers craved the most. Ophüls, though, repels standard melodrama. Instead, he finds his way to the piercing, true emotions that sit at the center of a story. There’s no instinct toward manipulation, even when he inserts especially intense flourishes. In other creative hands, tactics that comes across as pushy have the heft of great literature. In particular, Ophüls had a unique talent for moving the camera with entrancing fluidity. The shadows cascade across the drama, and the actors operate with a paradoxical mix of dreamlike spirit and firmly grounded feeling. He crafts an immersive, quietly thrilling cinematic landscape. If he was out of place in Hollywood, that was Hollywood’s loss, not his.