To be a youthful fan of superhero comics during the nineteen-eighties, one needed — absolutely needed — to adore the X-Men. Writer Chris Claremont took the granules of Stan Lee’s original conceit for the team, with the maligned mutants standing in for every beset group of people in American culture, and spun it into a fair representation of the sensation of being perpetually outcast that comes with adolescences, especially for those trudging through their teenager years with an affection for comic books in the time before the culturally normalizing effect of the Marvel Cinematic Universe. This is what it feels like to be young and willfully misunderstood, Claremont offered, and wouldn’t it be nice if razor sharp claws sprung out of the top of your hands any time you were being hassled too much?

I came to Uncanny X-Men a little later than some other titles, but I fell hard. I reveled in the soap operatic instincts of Claremont’s writing (and eventually soured on the title when his weakness for outer space sagas took the series down some seemingly endless avenues), but I was especially enamored of his ability to occasionally deliver an issue that seemed like a mere diversion, in large part because those stories always stealthily deepened the characters. In that category, few stories were more delightful and satisfying than “Kitty’s Fairy Tale.” Presented as a bedtime yarn spun by the X-Men’s youngest member and newest recruit, Kitty Pryde, the story recast our various anguished heroes as the bubbly cast members in a fanciful romp. Kitty, naturally, was the hero of the tale, a fearsome pirate. With a Wizard of Oz-style methodical precision, she encountered her transformed teammates, including one who now resembled a Smurf: 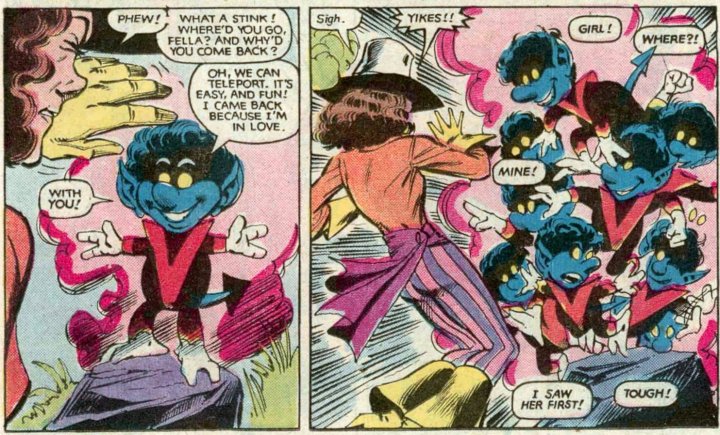 This version of Kurt Wagner, also known as Nightcrawler, was popular enough that it carried over into proper continuity. The creatures, dubbed Bamfs (after the commonly used sound effect that accompanied Nightcrawler plying his main super-power) cropped up in various stories that came later. If only the same could be typed for the Taz-like avatar of the unduly ubiquitous Wolverine.

I hardly have exhaustive knowledge of everything Marvel Comics has published over the course of the past thirty years or so. It’s entirely possible that scruffy ruffian has popped up somewhere. If so, I’ve no doubt that story was terrible. So adjust my wish to see more of the Coors-bearing beast accordingly.

The story progressed with the giddy dream logic of a story made up on the fly. Kitty’s intent, within the narrative, was to entertain the sweet little sister of her burly crush, Peter Rasputin. Within the exercise, she revealed some of her own feelings of inadequacy around being the kid member of her superhero squad. Why, she can’t even give herself boss magical wings when the time comes.

This issue of the X-Men wasn’t actually all that strange, at least in the grand scheme of superhero comics. In a way, it was simply an extension of the “imaginary stories” that DC Comics published with some regularity years earlier, providing the opportunity for creators to explore notions completely detached from the continuity boundaries set up for the individual characters. For me, though, already deeply bought in to the meticulous rigors of Marveldom, it seemed the height of whimsy, a blissful indulgence. Claremont, who adhered to Vonnegut’s dictum “Be a Sadist,” even found space to offer an emotional respite to star-crossed lovers Scott Summers and Jean Grey.

After years and years of tiresome back-and-forth with Jean Grey’s character, this now plays like an echo of an echo, but Uncanny X-Men #153 hit newsstands (when comics still hit newsstands) only a couple years after the fabled “The Fate of the Phoenix!” issue. It had weight.

In retrospect, this individual comic had absolutely everything I was aggressively, anxiously seeking whenever I plunged myself into the printed pantheon of four-color fantasies. It was awash in imagination, taking full advantage of the form to go wherever Claremont and his pencilling collaborator, Dave Cockrum, chose. The comic book page was a wonderland without real rules. Uncanny X-Men #153 demonstrated why that held such appeal.

4 thoughts on “My Misspent Youth: Uncanny X-Men #153 by Chris Claremont and Dave Cockrum”