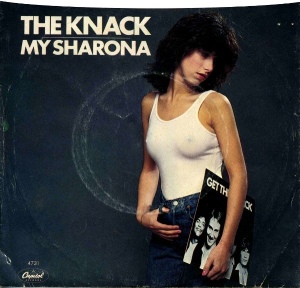 By practically any measure, “My Sharona” was the biggest hit of 1979. Given the song’s back story, it was also likely the skeeziest. The debut single by the Knack, a group formed by ex-Sky member Doug Fieger, was targeted directly at a single girl. Sharona Alperin was a high school girl who Fieger had fallen hard for, developing a full-on fixation that was likely only compounded by her reluctance to reciprocate his affection. The most generous accounts place Alperin as seventeen at the time. Fieger was ten years older. Attempts to capture Alperin’s attention didn’t end with naming her in the song. Fieger brought her into the studio to contribute backing vocals, put her picture on the sleeve for the single, and, following the swell of success for the Knack, bought her a ticket to join the band on tour in Hawaii. Knowing all that, even the relentless prowl that is the song’s genius riff starts to sound like it’s stalking her. Never doubt the effectiveness of a rock star’s full courting press. The Aloha State is reportedly where an actual romantic relationship between the two began. They were together for four years and maintained a strong enough friendship after their eventual break-up that she was there when Fieger died of cancer, in 2010. Inspired in part by Alperin’s acumen in helping her boyfriend secure housing during his whirlwind years, the former muse went into the field of high end real estate, reportedly securing big name clients such a Leonardo DiCaprio and Claire Danes. There is probably no mystery as to what song plays on her business website. “My Sharona” spent six weeks on top of the Billboard chart, selling millions of copies worldwide. One account claims at its peak it moved over four million copies in the span of a single month. It’s also one of those songs that’s never really faded away, even modestly re-charting after it was memorably featured in the 1994 film Reality Bites.

As it existed in the seventies and into the early eighties, college radio was basically a slightly more daring version of album rock radio, with an added affection for fusion jazz trailing through it. The first CMJ album chart, actually pulled together for a prototype issue a few months before the launch of the publication proper, had a Top 5 comprised of releases from Heart, Linda Ronstadt, Yes, Van Morrison, and the Who. I think of the transformation into the version of student-run broadcasting that I joined in the 1988 as something that took place fairly rapidly once the calendar odometer turned over to have an eight in the third column. But in 1981 there was clearly still room for a fairly straight-ahead rock band that hardly needed extra championing on the airwaves. By the time Foreigner released “Urgent,” the lead single from their hugely successful fourth album, appropriately titled 4, they’d already notched eight Billboard Top 40 hits and comfortably gone multi-platinum with all of their earlier albums. 4 found the group working with Robert John “Mutt” Lange, then probably best known for his slick, propulsive work with AC/DC. “Urgent” definitely sounds big and polished. Still a staple of classic rock radio, it’s now probably best known for the wailing saxophone solo toward the end. The band’s usual sax player, Ian McDonald, had departed the lineup before the recording of the album, leading the remaining members to recruit Motown legend Junior Walker to play on the track. The solo was pieced together from several takes, which contributed to its notorious reputation as mightily difficult for later saxophonists to replicate on stage. No fool, Walker made a point of recording his own cover version of the song two years later, after reassembling his All Stars, the band that backed him on a gaggle of hits in the seventies and eighties. Offering a touch of retroactive credibility, Thomas Dolby also guested on the original Foreigner track, playing synths. 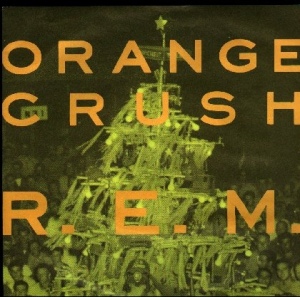 For a certain subset of college fan, Green was a huge test for R.E.M. After spending the entire middle of the nineteen-eighties as the standard-bearers for college rock, releasing five revered albums, the little ol’ band from Athens, Georgia made the leap from I.R.S. Records to Warner Bros., about as major as a label could get. Plenty had their knives at the ready, and it’s even now easy to find fans who’ll dismiss the album — and just about any major label R.E.M. offering, maybe aside from Automatic for the People —  as a nasty sell-out. My estimation is undoubtedly given a rosy tint by residual excited gratitude from the moment it hit my station’s Heavy Rotation on Election Day, 1988 (when I and my like-minded compatriots were in desperate need of a spirit-booster), but I think it’s a fantastic record. “Orange Crush” was the album’s lead single, basically serving as a gentle transfer from the more aggressive, politically-minded material of their prior two studio albums, Lifes Rich Pageant and Document, to the poppier, more generally joyful sounds of Green. Michael Stipe’s lyrics were still known for their mumbled obliqueness, although it was an affectation he’d largely shed by this point, leading to lots of chatter about the relative directness of “Orange Crush.” The song still featured lots of Stipe’s jaggedly distancing wordplay (“Follow me, don’t follow me/ I’ve got my spine, I’ve got my orange crush/ Collar me, don’t collar me/ I’ve got my spine, I’ve got my orange crush”), but the band that had once steadfastly refused to explicate the meaning of their art were fairly open that the part of the color spectrum cited in the song title was a reference to Agent Orange, a weaponized defoliant used in the Vietnam War that had recently been the subject of troubling news reports (and Emmy-hungry TV movies). Stipe’s father was a helicopter pilot during that conflict, but he and his bandmates insisted the song wasn’t directly about him. Instead, it was a expression of everything Stipe had picked up by osmosis when growing up on and around army bases. For anyone still unclear on the song’s points, Stipe helpfully prefaced live performances of the song by warbling out the famed military recruiting theme song “Be all that you can be/ In the army.”

As we go along, I’ll build a YouTube playlist of all the songs in the countdown. The hyperlinks associated with each numeric entry lead directly to the individual song on the playlist. All images nicked from Discogs.