There are many building blocks of the internet, but the cornerstones are think pieces, offhand lists, and other hollow provocations meant to stir arguments and, therefore, briefly redirect web traffic. Engaging such material is utterly pointless. Then again, it’s not like I have anything better to do.

There’s no question that Pitchfork wants to launch a thousand response posts, articles, diatribes, manifestos, and social media wails with their latest exhaustive ranking of a decade’s music. Back when Rolling Stone was the only game in town for this sort of endeavor, they had an apparent goal of constructing a settled consensus. There were flares of idiosyncrasy, but the lists were largely designed to quell protest, filling up pages with choices that even the heartiest detractors had to admit were significant chunks of rock ‘n’ roll history. Pitchfork is Robert Conrad with an alkaline battery on his shoulder, daring startled observers to knock it off.

I’ve no interest in railing against any aspect of the Pitchfork’s list of best 200 songs of the nineteen-seventies, in part because I’m adhering to the credo of my fab-and-a-half friend Crescent, who wisely maintains, “Tearing down is a snooze.”

Instead, why not offer twenty more tracks, inviting a few more artists to the swinging seventies party? (No need to leave keys in a dish by the front door; it’s not that kind of shindig, friends.) Sticking with bands and performers who didn’t show up anywhere among the Pitchfork picks, here are at least some of the songs I believe deserve celebration as the finest in a wildly wide-ranging ten years of music, presented roughly in chronological order. Links leads to the corresponding part of a YouTube playlist with all the tunes I selected.

Rod Stewart, “(I Know) I’m Losing You.” Whatever derogatory remarks may be held is reserve to assess the bulk of Rod Stewart’s solo career, those first couple records are majestic. He’s rarely been better than on this cover of the Temptations’ mid-sixties hit. 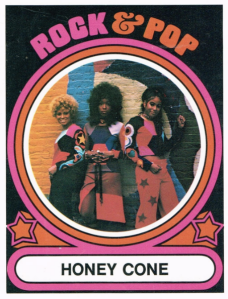 Honey Cone, “Want Ads.” This 1971 chart-topper was arguably the closest the Hot Wax label, launched by the Holland-Dozier-Holland team after they left Motown Records, came to delivering the brand of effortlessly brilliant R&B that made Detroit — or at least one building within the city limits — into Hitsville, U.S.A.

Randy Newman, “Sail Away.” Randy Newman at his most bruising and brilliant, pressing harsh satire into elegant music.

Albert Hammond, “It Never Rains in Southern California.” The seventies was responsible for the emergence of soft rock as a genre, which is almost crime enough to tie the entire mass of years to a pet rock and hurl it into the ocean. There were gems amid the dross, though, led by this single that follows the title with the arch punchline, “But girl, don’t they warn ya/ It pours, man, it pours.”

New York Dolls, “Personality Crisis.” It’s probably not quite correct to say punk rock starts here, but this is the point the turbine of it really started to spin.

Richard and Linda Thompson, “I Want to See the Bright Lights Tonight.” Some of the overlooked artists smack of Pitchfork trying to distance themselves from the stuffy, stale canon dictated by Rolling Stone. I can’t totally blame them for that, but it sometimes leads to a rock list version of self-inflected, amateur rhinoplasty. The ache in this song makes it a more understated cousin to Bruce Springsteen’s operatic epics of small town yearning. The balance of the song is exquisite.

First Class, “Beach Baby.” Arriving about a year after American Graffiti and at roughly the same time as Happy Days, this single reveled in the same dewy nostalgia: “Remember dancing at the high school hop/ The dress I ruined with the soda pop.” It looks backward while shimmering with a scrubbed-clean seventies vibe that is exactly the sound of AM radio just as the competing broadcast band was knocking it aside to take charge of dictating music culture. 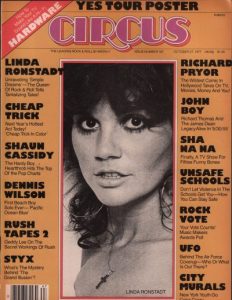 Linda Ronstadt, “You’re No Good.” Rarely given her due now, Linda Ronstadt absolutely owned the seventies. She was an aces interpreter of songs, including this one that had made the rounds a few times after Dee Dee Warwick originally recorded it, in 1963. Like others Ronstadt got her voice on, she took charge of it and made it forever hers.

The Runaways, “Cherry Bomb.” This defiant burst of juicy rock goodness is an announcement that no guff will be taken, and a preemptive reclamation of the cheap categorization that an all-female band was sure to face in 1976.

Tom Waits, “The Piano Has Been Drinking (Not Me) (An Evening with Pete King).” Waits released a half-dozen albums during the seventies, honing his persona as a bedraggled barfly poet. That Pitchfork couldn’t find room for him in two hundred songs is one of the most perplexing aspects of the list, especially with this defining track right there in the middle of the decade.

Peter Gabriel, “Solsbury Hill.” “Hey, I said, you can keep my things they’ve come to take me home.”

Billy Joel, “Scenes from an Italian Restaurant.” I get that William Martin Joel is the absolute epitome of uncool, but I don’t think it’s solely my well-documented weakness for the man who’s known for playing the piano that makes me think he deserves to be somewhere on the tally. Frankly, any list of songs from the seventies that doesn’t include the one with the lyrics “Well, they got an apartment with deep pile carpets/ And a couple of paintings from Sears/ A big waterbed that they bought with the bread/ They had saved for a couple of years” was clearly built largely by people who didn’t live through the decade.

Nick Lowe, “So It Goes.” It is mere happenstance that Elvis Costello is considered one of the great songwriters of his time and Nick Lowe is little more than a cult hero. If the fabric of the music universe ruffled a different way, their respective statures could easily be reversed. (Or — hey! — wouldn’t it be great if both of them were venerated figures?) Nothing confirms a songwriter means business quite like opening a song with the lyric “I remember the night the kid cut off his right arm.” 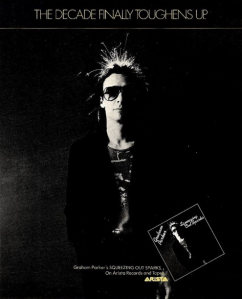 Graham Parker and the Rumour, “You Can’t Be Too Strong.” Parker made caustic, fiercely intelligent rock ‘n’ roll throughout the second half of the seventies, largely to the casual disinterest of most of the record-buying public. This track, from the 1979 album Squeezing Out Sparks, demonstrates the potent emotions he could instill in just a few lines.

The Soft Boys, “Leppo and the Jooves.” Presumably, conventional wisdom dictates that the 1980 single “I Wanna Destroy You” is the only track from Robyn Hitchcock’s formative band that requires an occasional music critic hat tip. I disagree.

Joe Jackson, “Is She Really Going Out With Him?” Had Pitchfork put the entirety of Jackson’s 1979 album Look Sharp! on the list, it would have been defensible. If pressed, I might actually prefer the title cut, “Sunday Papers,” or “Pretty Girls,” but the enduring lovelorn appeal of this hit single is undeniable.

The Records, “Starry Eyes.” This is power pop at its most glorious. The Records didn’t really have any other songs of note. With a single this good, they didn’t need any.