For a variety of reasons, superhero comics rarely provide more than glancing attention to the holidays. That was especially true years ago, when there was limited pages for the roiling sagas because publishers were wary of flooding the market. (That’s not really an issue now.) That often meant that any dose of holiday cheer was more likely to arrive in strange, non-continuity corners of the fictional universes. In the late nineteen-eighties and early nineteen-nineties, there was no stranger non-continuity corner in Marvel comics than What The–?!

The series was Marvel’s stab at a Mad-styled parodies of the superhero stories they offered up, something the publisher tried out from time to time. For their title’s tenth issue, it was promotionally repurposed as an X-Mas Special (the slightly skewed formatting of the holiday’s shortened name alluding to the most popular Marvel title of the day). The lead story was written by Scott Lobdell and drawn by John Byrne, and it had the distinction of bringing the artist back to the villain he had rendered with great aplomb during a justly lauded run on Fantastic Four: Doctor Doom.

In this story, declared “A YULETIDE FABLE,” the malevolent monarch of Latveria is relaxing in his castle on Christmas Eve when he hears the intruder alarm go off. Rushing to the rooftop, he finds that one of his security measures has entrapped none other than Santa Claus. Unable to complete his rounds, the gift-giving fellow enlists Doctor Doom to complete the annual task of delivering presents to all the girls and boys on the “Nice” list. 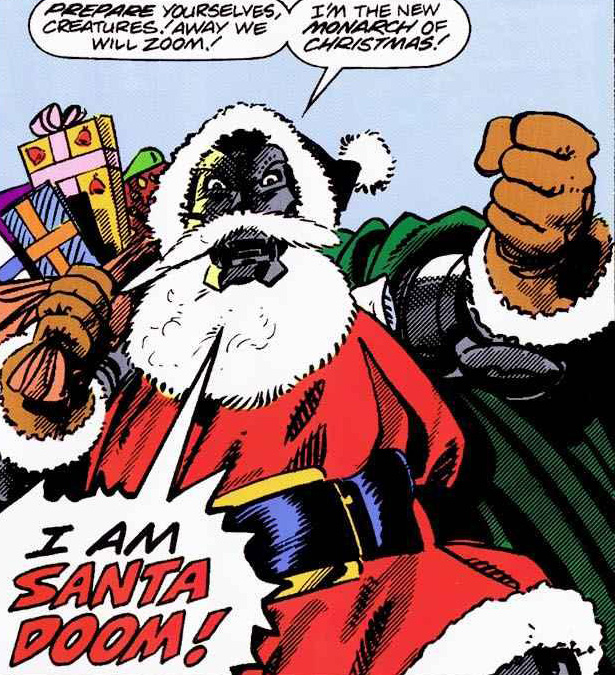 Though he needs to contend with a particularly grouchy Rudolph, Doom performs well in the uncharacteristic role, at least until the route brings him into the headquarters of various superheros. That includes a stop at Avengers Mansion, where Doctor Doom discovers that Earth’s mightiest heroes adopt a benevolent policy towards the members of their rogues gallery when Christmas rolls around.

By the time Doctor Doom touches down at the home of his chief foes, the Fantastic Four, the various heroes on duty that night have cohered around their suspicion that their armored adversary is up to no good. A battle briefly breaks out, but it is quickly halted when it spills out to the doorstep of the local “Hospital for Sickly Children.” When a doe-eyed child naturally doesn’t understand why the superheroes are attacking someone who appears to be Santa Claus, the differences are set aside for the sake of the impressionable youth.

Once the world has been rounded, Doctor Doom lands the sleigh back in Latveria, where Santa Claus has recovered adequately to head back to the North Pole. As payment for Doctor Doom’s subcontracting work, Santa Clause bestows upon Victor Von Doom his very heart’s desire.

Merry Christmas to all, and to all a “Good grief.”