In 1985, when Eurythmics released their album Be Yourself Tonight, the safe bet would have involved creation of calculated echoes of “Sweet Dreams (Are Made of This),” their smash hit single from a couple years earlier. Doing so was anathema to the duo. “It’s just to do with the original concept of Eurythmics, which was to keep changing every situation all the time so it never got stale,” Dave Stewart explained while the album was still in its formative stages. “In order to make this album, we had to do a load of work even to make it into a studio, and it’s like an adventure, like building your own house or something.” The band’s trademark sharp, icy electronic pop was still present, though more as an underpinning than a driving force. Lead single “Would I Lie to You?” was immediately distinctive for its classic American R&B sound. Stewart maintained that he was after precisely that sort of riff, and it came to him quickly over a breakfast in Paris. Though variety was the goal, it initially seemed Stewart strayed a little further afield than his chief collaborator, Annie Lennox, thought prudent. “At first she wasn’t too sure about it, as it sounded too removed from what we were doing,” he recalled later. “But the great thing about Annie is, even if she’s not sure at first, she will let the experiment develop, whereas some people are too afraid and shut down before even trying.” If the sonic shift was jarring to music fans, they, like Lennox, collectively came around quickly enough. “Would I Lie to You?” became the third (and final) Eurythmics single to crack the Billboard Top 5.

The title of Julian Cope’s first solo album is World Shut Your Mouth. It does not contain the song “World Shut Your Mouth.” Instead, that track arrived a few years later as the lead single for his third solo album, Saint Julian. It was Cope’s first offering with Island Records, a label he jumped over to after the executives at his previous recording home, Mercury Records, declared a batch of demos he delivered to be subpar (or, in the more pungently-phrased recollection of Cope: “My A&R man said, ‘These songs are shit, go away and write some more.'”) “World Shut Your Mouth” was one of the selections of disputed quality. By the time Cope recorded the song for Saint Julian (the album was released in 1987, but the single made its bow in the fall of 1986), he’d fully embraced a decadent rock god persona, and the resulting track is invested with precisely the level of glorious bombast that implies. In addition to the icon affectations, Cope was, to borrow terminology from his U.K. homeland, a bit of a nutter. At around the time the album was released, he offered Spin magazine a borderline indecipherable explication of an extended take on the song. “The idea of the long version of ‘World Shut You Mouth’ was going into this garden and the idea of everything being so cool that you let certain things go past that are really not good,” he said. “But when you’ve got a relationship you think, ‘I won’t question that bit for a while ’cause this scene is really good.’ The long version has got a real shape to it. It’s very erotic, isn’t it? It keeps building — it’s like a massive orgasm!” 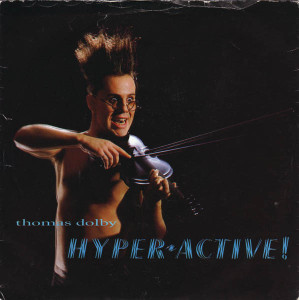 If everything had gone according to plan, the world would have know “Hyperactive!” as a Michael Jackson song. Thomas Dolby has his commercial breakthrough with the single “She Blinded Me with Science” in 1982, at right around the time Jackson’s Thriller was upshifting from successful album to global sensation. When Dolby was in Los Angeles, Jackson met with him and the two talked about their respective approaches to music-making. The tête-à-tête concluded with Jackson suggesting he’d be interested in a Dolby-penned track for his next album. “So, in fact, on the plane back from L.A. to London I put on my headphones and I came up with this groove and bass line for ‘Hyperactive!’ and a melody, and I did send it to him,” remembered Dolby. “And he said in the end it wasn’t appropriate for the new album that he was doing. So that didn’t work out. But by that time, I was in love with the song, so I did it myself.” Despite Dolby’s intention of handing the song over to another artist, he noted that it always felt like a personal expression rather than an attempt to artistically adopt someone else’s persona. “I think it described my personality as a kid, if anything,” Dolby said. Released in early 1984, Dolby’s recording of the song served as the first single from his sophomore album, The Good Earth.

As we go along, I’ll build a YouTube playlist of all the songs in the countdown.

The hyperlinks associated with each numeric entry lead directly to the individual song on the playlist. All images nicked from Discogs.