Compliance (Craig Zobel, 2012). Based, incredibly enough, on a true story, Compliance shows the ugly susceptibility people have in the face of authority, even when those giving the orders have done nothing to prove they deserve to be followed. On a busy, stressful Friday night, a fast food restaurant manager (Ann Dowd) receives a phone call from a person claiming to be a police officer (Pat Healy). The man on the line says a teenaged employee (Dreama Walker) stole money from a customer. She needs to be brought into a back room to be interrogated and strip searched, he instructs. What follows is an assault of escalating degradation, all perpetrated with innocent obedience by people who believe they are listening to law enforcement. Even the film’s most lurid details are based on fact, but it sometimes pushes so drastically far into implausibility that writer-director Craig Zobel would have been better off omitting the worst of it. Although Walker spends most of the narrative in different states of undress, Zobel clearly tries to prevent the images from becoming leering and sensationalistic. He doesn’t always succeed, proving just how difficult it can be for a filmmaker to safely traverse minutely fine lines.

The Bad Sleep Well (Akira Kurosawa, 1960). Akira Kurosawa was known — and revered — for taking Shakespearean dramas and reimagining them as samurai epics, but the Japanese master filmmaker could pull of the same astounding trick with more modern fare. With a story that echoes Hamlet, Kurosawa’s The Bad Sleep Well depicts the insidious corruption within the capitalist and political spheres of postwar Japan, couching it within familial drama as a corporate titan’s daughter (Kyoko Kagawa) marries a young man (Toshiro Mifune) with mysterious intent. As usual, Kurosawa insightfully and carefully explores his many themes, while also framing shots with exquisite care that somehow feels naturalistic. There’s a bleak sense of humor laced through the proceedings, as well. If the film lacks the grandeur of Kurosawa’s most famed achievements, it excels at finding the epic within the seemingly mundane. 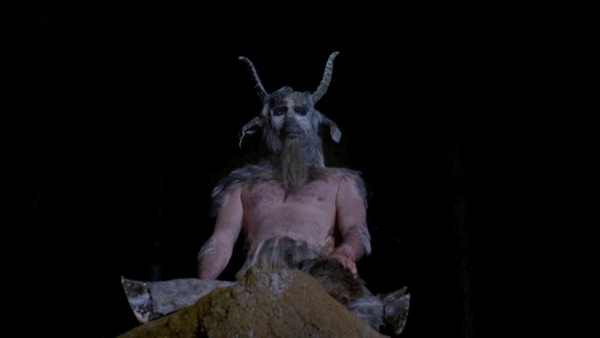 The Devil’s Bride (Terence Fisher, 1968). Known as The Devil Rides Out in its U.K. homeland, this entry in the beloved pantheon of Hammer Film horror offerings concerns itself with the scourge of devil worship. Based on a 1934 Dennis Wheatley novel, the film concerns the efforts of two British gentlemen (Christopher Lee and Leon Greene) to rescue a fellow member of the gentry (Patrick Mower) from the thrall of a cult that passes the time by sacrificing farm animals to surprisingly chill satanic figures. The tone is set by Lee’s characteristic performance, disrupting a prevailing air of stern refinement with flurries of aggravated alarm. The great horror writer Richard Matheson penned the script, and it carries markings of authorial sturdiness and wry humor. Director Terence Fisher bring a vigorous craftsmanship to the proceedings, especially when called upon to deliver the film’s climactic temporal tomfoolery that is equal parts delightfully clever and splashily silly.