For a little while in the nineteen-nineties, I was prepared to follow writer Grant Morrison just about anywhere. When I made that unstated pledge, it never occurred to me that I’d be following him to the Justice League.

I knew of Morrison’s work because of the writing he did on the fringes of the DC Universe. In a way, Morrison set the template for the publisher’s Vertigo imprint, launched in 1993. He took on authorship duties with characters from DC’s history — most notably Doom Patrol and Animal Man — but brought a whole other creative cunning to their adventures, indulging in devious meta shenanigans and otherwise plunging them into dark, warped stories.

In the mid-nineteen-nineties, after following those wondrously weird tendrils of imagination, Morrison received an assignment that initially seemed perplexing. He was given a revived version of DC’s superteam, branded with the hip acronym JLA.

The Justice League of America had been around for ages, though it had long strayed from the model of bringing together the publisher’s biggest heroes, opting instead for unloved also-rans and then flagrant comedy. Morrison was allowed his own version of a back to the basics approach, with the biggest names in the DC comics stable (although the ever-flailing DC editorial approach occasional left him saddled with bad ideas like sparking blue Superman). I didn’t always gel for me, but when Morrison’s sensibility melded with a perfect story concept, it was irresistible, no more so that the when Starro muscled into the panels.

Starro dated back to the very first appearance of the Justice League of America, published in 1960, making it natural that Morrison would want to use the villainous being at one point. The story also made room for a more recent figure.

Sandman was already considered writer Neil Gaiman’s comics masterpiece, making it fairly audacious that Morrison took the central figure and plopped him down into a big ol’ superhero story. But by employing the cryptic deep thinking, Morrison had a mechanism for engaging in some of the sideways thinking he brought to his mainstream far, such as Green Lantern having his mind blown by the reference to his tool of choice as a “wishing ring.”

Even better, Morrison back then had a particular skill for honoring the tropes of the superhero mythos while simultaneously extrapolating to get at deeper truths that could be easily overlooked because of the familiarity of the rhythms of a comic book adventure. Villains show up, the heroes fight the villains. Morrison took the time to think about the impressions that might be generated by these strange creatures populating the story. For example, wouldn’t a giant outer space starfish that controlled minds be, you know, pretty scary?

The oddness of Howard Porter’s art could make the more conventional moments a little off, but he was well-suited to bringing the freakiness.

Morrison told dense intricate stories, but working on JLA opened up his sense of grandeur. The scope could be titanic. These heroes weren’t going to spend a lot of time stopping bank robbers. Most of them could comfortably cross out of the planet’s atmosphere and cavort among the stars, so Morrison regularly veered into appropriate levels of spectacle. 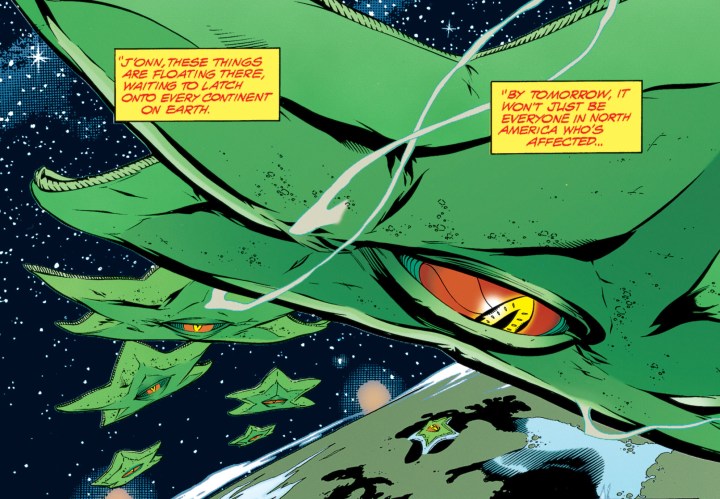 Still, no matter how much mischief Morrison got up to, these stories go the way they go. Starro is bested and the heroes recline in the satisfaction of their victory.

Sometimes, Morrison’s ideas got too big for the comics page, and it seemed he was only able to type out about a third of what he had in mind, leaving sprawl and uncertainty on the page. That was present in JLA (I might argue the flaw first manifested here), but it was energizing to see a creator go big with ideas instead of just spectacle, reversing a dire trend of nineties comics. Even when it got a little bogged down, this take on the Justice League was worth the effort. 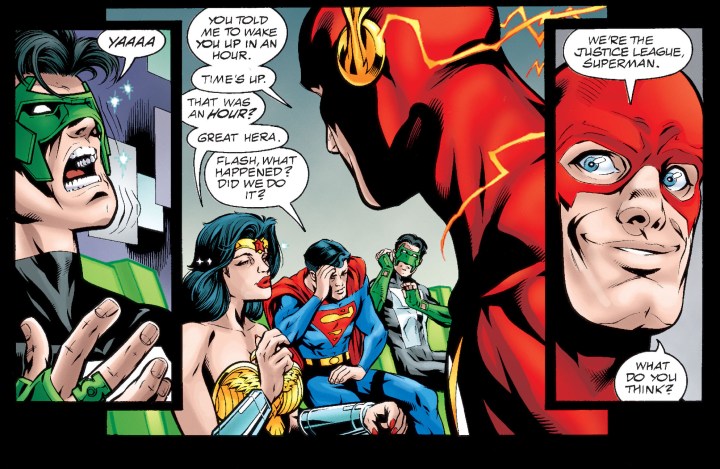