12. The Smithereens, “Blues Before and After”

The second single from the Smithereens album 11, “Blues Before and After” was a perfect example of the slightly tougher sound the New Jersey band generated with producer Ed Stasium. Probably best know for his work with the Ramones, Stasium was credited with helping the hard rock band Living Colour turn into unlikely hitmakers with their debut album, Vivid. When presented with the notion that Stasium significantly influenced the band’s musical approach, however, lead singer and chief songwriter Pat DiNizio chafed, noting the demos recorded for the album already exhibited a harder thump.  ”I can’t say Ed’s presence brought a heavier sound,” DiNizio said at the time. ”Ed was instrumental in bringing the sound of what the band evolved into into sharper focus.”

This cut is up from 13 on the previous chart. 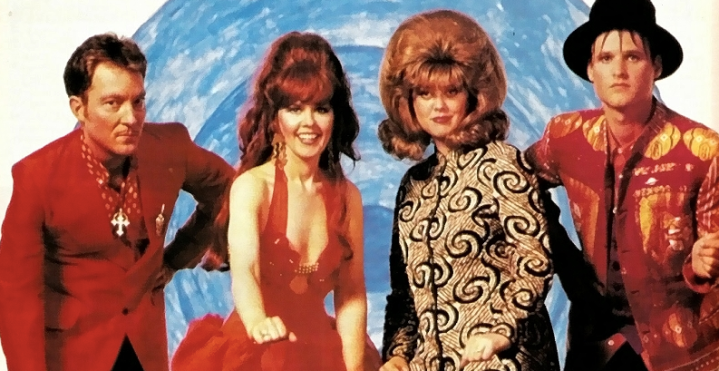 Using peak chart position as the sole criterion, “Roam” was just as big of a hit as its immediate predecessor in the singles discography of the B-52’s. Like the still inescapable “Love Shack,” this track from the band’s 1989 album, Cosmic Thing, was a dominant force on MTV and Top 40 radio. Seemingly a straightforward call to go out and travel the planet, “Roam” has had an interesting afterlife, with a certain sect of pop song theorists detecting far more salacious intent in the the track’s buoyant refrain. To determine the accuracy of that supposition would require interrogation of longtime friend of the band Robert Waldrop, since he’s the one who penned the lyrics. According to singer Kate Pierson, the music came together quickly in the studio, as the band shaped a jam around the lyrics under the watchful eye of producer Nile Rodgers.

This cut is down from 8 on the previous chart.

I am quite bad at predicting which songs will become hits, and, by extension, which musical artists will develop the sort of robust staying power that allows them to become a significant influence on those that follow. Renegade Soundwave is why I know this. In my rickety recollection, Soundclash, the debut album from Renegade Soundwave, arrived at my college radio station at about the same time as the first album from Nine Inch Nails, Pretty Hate Machine. Superficially, the two releases were similar, offering throbbing dance music scorched with the industrial aggression mastered by bands such as Front 242 and Skinny Puppy. I thought Nine Inch Nails was nothing special, but that Renegade Soundwave had the makings of a college rock contender, especially on the basis of the single “Biting My Nails.” I don’t disavow that opinion, but its predictive powers were clearly very, very weak. I also didn’t know the cut was a cover, so basically my bold pontificating on the song was an ill-informed disaster all around.

This cut is up from 14 on the previous chart.

Stay Sick! was officially considered the fourth studio album by the Cramps, the California-based band that first stepped on a stage in 1975, melding punk sensibility with a rockabilly soul to create a vividly unique sound all their own. It was also their first studio effort since A Date with Elvis, released four years earlier. According to guitarist Poison Ivy, who also served as producer on Stay Sick!, the layoff was largely attributable to the band struggling to find the right corporate partner. They were forced to peddle the album for about two years before ultimately landing a single-album deal with Enigma Records. “We’ve just been kinda left to our own resources to put out records, and that’s kinda hard for people like us to do,” she said on MTV’s 120 Minutes. “You know, we’re sort of unemployable except for being the Cramps.” “Bikini Girls with Machine Guns” was the first single from the album and delivered the band a rare taste of mainstream chart success, crossing into the Top 40 in the U.K.

This cut is up from 21 on the previous chart.

I wrote about the chart we’re tracking through at the beginning of this particular Countdown. Previous entries can be found at the relevant tag.

As we go along, I’ll build a YouTube playlist of all the songs in the countdown. The hyperlinks associated with each numeric entry lead directly to the individual song on the playlist.