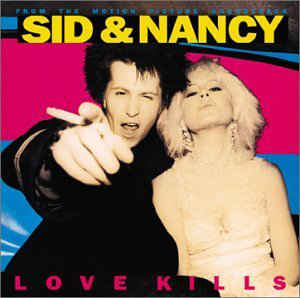 I haven’t done the research to confirm my theory, but I believe Gary Oldman is the first and only winner of the Academy Award in the best actor in a leading role category who has delivered a cover of “I Wanna Be Your Dog” on a major label album release. Some Oscar-related trivia is more obscure than others.

The mid-nineteen-eighties was a time when a lot of people sorted through the wreckage of punk rock’s heyday. Time had not yet conferred the romanticized retrospection of misfit charm on the most spectacular blunders of career self-sabotage and more grievous infractions. All manner of punk rock survivors were engaged in exculpatory examination of their own recent legacy — or embarking on bizarre acts of personal reinvention — and a few interested outside artists took it upon themselves to dramatize the thrilling tumult. A convergence of insider and outsider is present on the soundtrack to the 1986 feature film Sid & Nancy.

Dramatizing the doomed love affair of Sex Pistols bassist Sid Vicious (Oldman) and Nancy Spungen (Chloe Webb), Sid & Nancy was filmmaker Alex Cox’s follow-up to the Repo Man, which became an immediate cult hit upon its release, in 1984. It was at the wrap party for the biopic — then titled Love Kills — that Cox met Joe Strummer, former member of the Clash, who’d crashed the event. As legend has it, Cox cornered Strummer in the bathroom and suggested that the proper penance for his trespassing was the composition of an original song for the film. The meaty “Love Kills,” framed lyrically as a conversation between Vicious and an arresting officer, was the significant result.

Other musicians who’d traversed the punk years and emerged relatively unscathed were also present, with the decidedly mixed results endemic to soundtracks of the nineteen-eighties. “She Never Took No for an Answer” is a lovely John Cale song from the era in which he sounded like an art-pop Leonard Cohen, but “Pleasure and Pain,” contributed by Vicious’s bandmate Steve Jones, is remarkably drab. The soundtrack also includes a couple instances of Oldman aping Vicious in brash covers, gems from the Pogues (such as the wonderfully lax instrumental careen “Junk”), and enough of the spindly synthesized score by Pray for Rain to fully verfity the film’s 1986 copyright date.

For a flash in the mid-nineteen-eighties, there was a demand for punchy, straightforward rock ‘n’ roll, played with murky brio and a distinct undercurrent of heart country earnestness. Evidently, the supply of such sounds required such consistent resupplying that college radio programmers occasionally needed to import the material, even from highly unlikely trading partners.

The Pushtwangers hailed from Sweden, a strange land more renowned — both in days gone by and more recently — for shaming the rest of the world for their absolute command of pop music than guitar rock that sounds like it came straight outta the garage. Nonetheless, Here We Go Again, the second full-length from the band, is as direct a stab at gaining inroads onto album rock radio as anything the Black Crowes ever laid down in their various studios filled with skunky smoke. Adhering to the rowdy rock boys stereotype, the Pushtwangers even signed off on an album cover featuring a model wearing a dress that could be stripped off, like a melding of Andy Warhol’s famed “Peel Slowly and See” gag and dirty playing cards.

The material on Here We Go Again is solid enough, but rarely transcends — or builds on in the slightest way — its inspirations. The snarly and brash “I’m a Man” would be a worthy addition to any skilled bar band’s set list, and “The Shot” amuses simply by sounding like a more caffeinated version of the Georgia Satellites. “Dancing on Thin Ice” opens with one of those spooky, downbeat guitar lines that metal bands like to deploy when they’re trying to project quiet menace, and progresses into lyrics only partially forgivable due to their origin in a different language (“So don’t let me hear it’s a fire you feel/ cuz hell is a place you’ve never been/ You’re a stupid girl/ And you’re dancing on thin ice”).

And there’s no language barrier that can excuse the worst infractions on the album. I will undoubtedly encounter several terrible song titles during the course of this long Countdown trek, but let’s go ahead and name “She’s Blind (But I Don’t Mind)” as an early nominee for worst affront against all that is verbally respectable. 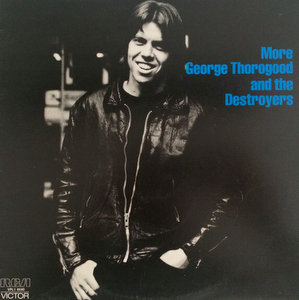 How perfect it is that Delaware’s favorite rock ‘n’ roll son has an album simply called More George Thorogood and the Destroyers. A unpretentious practitioner of blues rock with a particular proclivity for inspired raiding of the songbooks of ancestral titans of the form, Thorogood was a performer who simply out his music out there with little evident anguish. These are great songs played with loving care, he seemed to argue, so why fuss about it?

His self-titled debut of Thorogood and his backing band was released in 1977, followed on year later by Move It On Over. Released on Rounder Records, they were successful enough that MCA rummaged through their discard pile to retrieve the demo Thorogood recorded for them in 1974, releasing it as the 1979 mini-album Better Than the Rest. In 1980, Thorogood reclaimed control of his discography with More.

As usual, the album was comprised largely of covers of mid-century blues classics. Opening with a version of Willie Dixon’s “I’m Wanted” (“Well, I’m wanted by the men want to learn my line/ I’m wanted by the women cause I love so fine/ Wanted by the boys wanna learn my style/ I’m wanted by the girls cause it drives ’em wild”), the album quickly establishes itself as a magic backwoods bar jukebox of gritty jams to accompany the progress from sorrow-drowning to loud, slurred testimony atop a rickety table.

Thorogood is no innovator, but he’s genuine enough in his acts of preservation to still feel as though he’s providing a blessed service. His version of “Bottom of the Sea,” originally by Muddy Waters, is tight and satisfying, and the take on Elmore James’s “Goodbye Baby” shows that Thorogood can also thrive when he slows it down. The album’s sole original has its own stick-to-the-ribs appeal. “Kids in Philly,” an instrumental penned by Thorogood (billed on the label as Jorge Thoroscum), has the forthright charge and horn-dappled flourishes of early rock ‘n roll, when the indebtedness to the blues was still deeply present in every 45. Thorogood himself would probably never claim it was as strong a piece of songwriting as those he covered on the album, but it’s reasonable evidence that he was a rock ‘n’ roll student who could apply his learning.

A devoted fan of the Beatles. Billy Joel surely knew that Sgt. Pepper’s Lonely Hearts Club Band was officially the eighth studio release by the four lads from Liverpool. That might explain — if not consciously, then at the cellular level — why Joel brought a previously unseen vigor to his recording efforts when it came time for his own eighth album, The Nylon Curtain. Without necessarily noting the numeric symmetry, Joel has acknowledged the influence of the Beatles’ landmark 1967 album, noting the significant production layering and heavy lifting that needed to be done in the studio to wrangle the individual tracks into place.

The influence of the latter day Beatles records is a resonant presence on the album, most notably on the grinding ballad of obsession “Laura,” the churning “Surprises,” and the gently psychedelic “Scandinavian Skies.” The latter track, though, also demonstrates the way that decidedly more modern material was seeping into Joel’s psyche. Due to its restrained, edgy synthesizer line and the incursion of a faint vocal line that sounds like public address announcements from a foreign airport, I swear the first thirty seconds of “Scandinavian Skies” could make a not-so-casual listener believe they’d stumbled on a previous unearthed Laurie Anderson record.

Joel may already have become as mainstream as an artist could get (over the course of the previous five years, he’d released four multi-platinum albums and collected five Grammy Awards), but there was revolution in the air. New wave was a significant force in music when Joel recorded The Nylon Curtain, and elements of the subgenre’s jittery agitation are all over the record. Single “Pressure” is the most obvious example, riven by a piercing synthesizer part and expressing anguish over modern agony heightened by disconnection (“I’m sure you’ll have some cosmic rationale/ But here you are with your faith/ And your Peter Pan advice/ You have no scars on your face/ And you cannot handle pressure”). But it can also be found in the escalating pop thunderstorm of “She’s Right on Time” and singing the margins of practically every song.

In “Pressure,” Joel snarls about the emptiness of reading Time magazine, but his subscription clearly informed his songwriting in a whole new way. If Joel was subconsciously reacting to new wave and other emerging styles of pop music, his creative interface with current events was more intentional. On the single “Allentown,” Joel directly addresses the erosion of the portions of U.S. industry that helped build the middle class, correctly surmising the long social guarantee on one generation’s fortunes improving on those of the generation before was about to come to an end: “Every child has a pretty good shot/ To get at least as far as their old man got/ But something happened on the way to that place/ They threw an American flag in our place.” Similarly, “Goodnight Saigon” was a relatively early example of a rock ‘n’ roll artist devoting energy to the story of Vietnam veterans being callously discarded. The songs aren’t subtle — they’re so overt they skew perilously near to becoming didactic — but that’s part of their appeal. If the millionaire rock star is going to sing about the travails of those stuck with fruitless grinding as they strive for the promise a better life, then he’d best be a clear, honest reporter on the subject.

For me personally, The Nylon Curtain is a hugely important album. For many years, anyone who made the mistake of lending their ear was likely to be inundated with my dead-certain opinions on the unassailable genius of the album. I was probably wise enough to refrain from calling it the best rock album ever made, but I would quickly insist it was my favorite. It was one of the first albums in my collection, purchased not too long after its release, and I just about wore it out. Although I’ve occasionally championed it in the public sphere in recent years, I’m ashamed to admit I’m more likely to ignore it when rattling off other cherished albums that I feel make me seem cooler. But The Nylon Curtain was my unquestionable gateway to all the college rock, alternative, and indie that later filled my speakers with song.

Let others disparage the piano man. I’m prepared to declare that, like his beloved Beatles, on his eight album, Joel crafted his masterpiece.