A Quiet Place (John Krasinski, 2018). Writer-director John Krasinski’s horror film about sonically-attuned, carnivorous creatures is a splendid analogy for the anxieties of child-rearing. It’s also wildly implausible within the confines of its own fictional world, largely because the threats are made so fearsome that survival is basically impossible for even the most cautious being. One errant sneeze, sniffle, cough, stumble, or hiccup and the family is monster chow. The script — co-credited to Krasinski, Scott Beck, and Bryan Woods — smartly keeps the plot lean, and Krasinski shows a real facility for shaping mood and building tension. He’s less commanding playing the patriarch of the story’s besieged family, but he’s got a couple ringers in Emily Blunt and young Millicent Simmonds to give A Quiet Place the emotional heft it needs. 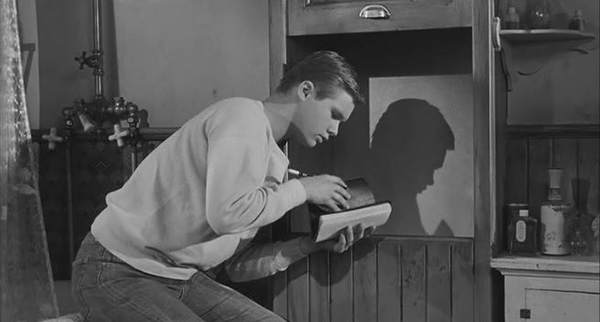 All Fall Down (John Frankenheimer, 1962). Based on a novel by James Leo Herlihy, All Fall Down is the first of three films directed by John Frankenheimer that saw release in 1962 (the others are Birdman of Alcatraz and The Manchurian Candidate). A family melodrama in its bones, Frankenheimer brings a nineteen-sixties edge to the film that enlivens the whole project. The film contains a very early performance by Warren Beatty, as ne’er-do-well son Berry-Berry Willart, but he’s notably ill at ease with the James Dean explosive anguish he needs to play. The other performances are far stronger, including deeply felt turns by Eva Marie Saint, Karl Malden, and Angela Lansbury (playing Beatty’s mother despite a mere twelve years difference in their ages, an infraction against reasonable biological chronology that Frankenheimer infamously compounded in The Manchurian Candidate). There also a nice turn from Brandon deWilde, playing the introverted, slightly odd younger son of the family. He brings a intriguing depth of feeling to a role defined by a placid naïveté.

New Wave: Dare to Be Different (Ellen Goldfarb, 2017). The ostensible focus of this documentary is the relatively short-lived but influential tenure of Long Island radio station WLIR as a rare commercial broadcast purveyor of challenging new music. From the time of a format change in 1982 until the loss of their FCC license in 1987, the station championed emerging artists while in a perpetual underdog station in a highly competitive media market. (Former staffers recount racing to the bank with their paychecks, sure whoever was last in line last would get a shake of the head and a report of insufficient funds). The film also gives ample screen time to the transformational music of the era, too often to the diminishment of the radio station’s story. I’m hardly the person to argue against eager excavations of songs and stories from college rock’s most fertile period, but director Ellen Goldfarb sidetracks to her interviews with nineteen-eighties artist with such frequency that the character of the station and its collective personnel gets lost. The movie becomes a scrapbook: delightful for those who experienced the time and place firsthand, short on meaning for everyone else.