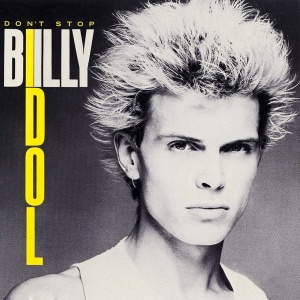 The bloke born William Michael Albert Broad was exceedingly comfortable returning to promising material until it finally turned into a hit. Taking the stage name Billy Idol because his school teachers routinely derided his lack of ambition and referred to him as “idle” (he claimed his first choice was in fact Billy Idle, but there was concern it would stir confusion because with a famous member of the Monty Python troupe), the spiky coifed singer launched a solo career after a tenure with the glammy punk rock band Generation X. For his solo debut, the EP Don’t Stop, Idol nicked a song from his former band called “Dancing with Myself.” He didn’t record a new version, choosing instead to remix the Generation X version. It became his first solo single.

As had been the case with Generation X, the single didn’t make much headway on the charts. It was rereleased as a single in 1983, after Idol’s self-titled full-length became a hit, yielding two entries in the Billboard Top 40. Once again, “Dancing with Myself” couldn’t push through, peaking at #102. These days, it’s retrospectively considered one of Idol’s major songs of the era.

On Don’t Stop, Idol also planted the seed for his biggest U.S. hit. The EP included a remarkably faithful take on the Tommy James and the Shondells’ song “Mony Mony.” At twice the length of the original, it also failed to breakthrough as a single, but Idol included a live version on the hits collection Idol Songs. The live cut became Idol’s sole single to top the U.S. charts, knocking another Tommy James cover from the peak position in the process. 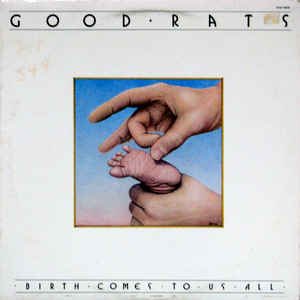 Former by a batch of schoolmates in Queens, New York, in 1964, Good Rats was one of those bands that prospered in the scruffy environs of nineteen-seventies FM radio without ever tapping the elusive magic required for a broader breakthrough. They toughed it out on the road, often playing hundred of shows every year, and released a batch of bruising hard rock albums through the decade. Suffused with ambition, Birth Comes to Us All likely stirred hopeful expectations for the band. Surely this would be the record that changed everything.

Using songs that had reportedly been written throughout Good Rats’ fairly lengthy career, Birth Comes to Us All was a loose concept album. According to press materials the tracks on the album are “all dealing with different phases of the human life cycle.” Instead of prog rock abstraction, the material on the album seems to be highly personal. Album opening ballad “You’re Still Doing It” is based it on lead singer Peppi Marchellos’s own marriage, which at the time was seventeen years strong and resulted in four children. One of those offspring, ten-year-old Gene, lends vocals to “Gino,” which otherwise sounds a little like Rod Stewart fronting Thin Lizzy, with some touches of prog rock’s sense of theatricality thrown in.

The greasy guitar opening to “School Days” leads to a litany of reflections on the progression through high school, all tinged with cynicism (“Sophomore year, you make your drug connections/ Junior year, you worry ’bout your ugly pimples showing”). “City Liners” has a funky, flinty vibe, and “Bed and a Bottle” is agreeably catchy. “Man on a Fish” bears a sonic resemblance to the roughly concurrent work of Billy Joel, as does “Spirit of the Times.” That should have been a boon to Good Rats (Joel notched six Top 40 hits across 1979 and 1980), but it might have actually done little more than dissuade the long-term fans who were expecting the rock to be a little harder.

Birth Comes to Us All was met with a familiar middling response, leading the band to splinter somewhat. Half the roster was replaced before the next studio album, 1981’s Great American Music. That record proved to be the last under the Good Rats name, until a revival was launched fifteen years later.

Wha’ppen? was the second full-length studio effort by the band known in their home country as merely the Beat. Affixed with a geographic modifier for stateside releases, the bustling band co-fronted by Dave Wakeling and Ranking Roger had an enormous U.K. hit with the previous year’s debut, I Just Can’t Stop It. Boasting three U.K. Top 10 singles, the album helped establish reggae and ska styles as a major force in British pop. When it came time to record Wha’ppen?, the band wanted to do more.

The English Beat deliberately broadened their sound on the album, drawing significantly on West African rhythms, which gave Wha’ppen? a far more easygoing feel that its predecessor. The jolting surprises were largely set aside, in favor of the easy groove of “Drowning” and the gentle flow of “Doors of Your Heart.” This was a band known for delivering wondrously exhausting catalysts for joyous dance floor energy, and now they were essentially urging fans to slow down and settle into the music, potentially discovering some of the politicized agitation in the lyrics. There are still bursts of zippy invention — the flamenco shadings of “Monkey Murders,” or the funky jolt to “I Am Your Flag” — but Wha’ppen? largely expects the listener to lean in rather than be grabbed forcefully by the hand.

Perhaps inevitably, the response cooled down, too. The album charted just as high as its predecessor, but the singles stalled outside of the Top 20. The English Beat would deliver just one more studio album, the much-loved Special Beat Service — before calling it quits. 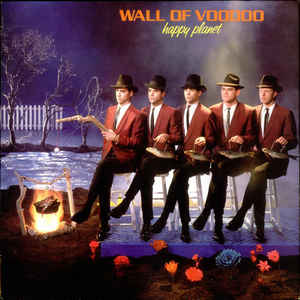 Happy Planet, the fourth album from the Los Angeles band Wall of Voodoo, was likely intended to merge the two distinct eras of the band. It reunited the group with producer Richard Mazda, who’d presided over Call of the West, the album that included “Mexican Radio,” the band’s biggest hit. That record was released during the span that Stan Ridgway was the group’s lead singer. Ridgway departed the lineup after that album, and Andy Prieboy, singer with the San Francisco art pop group Eye Protection, was recruited for frontman duties. It was surely hoped that Mazda could recapture the charms of the earlier record with the new personnel.

In accordance with the general Wall of Voodoo approach, the bulk of Happy Planet is decidedly, defiantly odd. That’s clear from the opening track, a weirdo cover of the Beach Boys’ “Do It Again.” The requisite music video included Brian Wilson, acting an unsettling madhouse vision that unfortunately (and maybe purposefully) called to mind his well-documented struggled with mental health. If Wall of Voodoo were hoping to generate chart goodwill with the familiarity of the song, they simultaneously did everything they could to repel the more casual listener.

Happy Planet is at its strongest when the band’s strange instincts are applied to styles that are sturdy enough to stand tall amidst the clowning. The quasi rockabilly of “Back in the Laundromat” and the boozy country-western goof “Ain’t My Day” overcome the sense that the band is signaling their disinterest. And the jittery “Elvis Bought Dora a Cadillac” is a surprisingly effective story-song.

Whatever aspirations Happy Planet carried, they weren’t fulfilled. Following the largely indifferent response to the album, the band broke up in 1988.