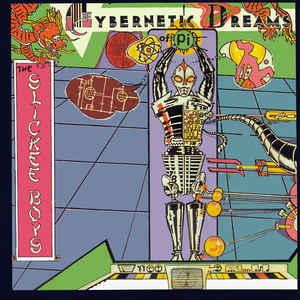 Formed in Washington, D.C., in the mid-nineteen-seventies, the Slickee Boys took their name from slang used by U.S. soldiers to describe the local young black market peddlers in Korea that dressed like rockabilly toughs. The band self-released material on guitarist Kim Kane’s label, Dacoit, and had a compilation of early singles pressed by Germany’s Line Records. The band’s music was hard to come by for most fans, which made it a fairly momentous event that Cybernetic Dreams of Pi — by the most accurate determination the second full-length studio release by the Slickee Boys — was on Twin/Tone Records. The Minneapolis label was still fairly new and freewheeling, but they at least knew how to get records into stores and onto turntables at college radio stations coast to coast.

In the manner of Twin/Tone’s star attraction, the Replacements, Cybernetic Dreams of Pi is raucous, tuneful, and a little smarter than the band would prefer to let on. The album can be easily and accurately categorized as punk, but there’s a brightness that betrays a poppy undercurrent, an eagerness to funnel a sloshing gallon of classic rock ‘n’ roll styles into the mix. “Life of the Party” straddles punk and power pop, buzzy surf rock carries “When I Go to the Beach,” and sugary delight “You’ve Got What It Takes” is like some long lost, extra dreamy garage rock staple. The fabulous tangle of “The Crawling Hand” demonstrates the band’s knack for bring a modern inventiveness to venerable styles.

The choices of songs to cover might be even more telling. “Invisible People” was originally recorded by obscure psychedelic practitioners Hamilton Streetcar, and Slickee Boys mostly offer an expert copy, as if acknowledging some bygone pop weirdness can’t be topped, merely emulated. The same is true of the band’s take on “Pictures of Matchstick Men,” arriving at a lusciously enthralling remake several years before Camper Van Beethoven made a similar cover into their biggest hit.

Although birthed in chaos, Gang of Four’s 1979 debut full-length, Entertainment!, was one of those albums that practically everyone knew — immediately and with certainty — was close to perfect. The inevitable question, then, was how on earth could they follow that up. If Solid Gold doesn’t reach the same peaks as its predecessor, there’s at least ample proof that the debut was no fluke. Gang of Four was a band with something to say. The message might not always have been clear, but it was delivered with enough blazing assurance to push past any mild muddles.

For good or ill (personal preference may certainly vary on this question), Gang of Four develops a more cohesive sound on Solid Gold. The sonic wanderlust is tamed somewhat, and the band settles onto a fierce post-punk platform. It’s a musical subgenre they helped invent, after all. So why not spend the record reasserting their mastery of it? The gurgling power of “What We All Want” and the authoritative clang to “Outside the Trains Don’t Run on Time” are grand. Eliding any expectations that noise would always prevail, “The Republic” sets a steady, controlled march, and “A Hole in the Wallet” takes a cunningly relaxed approach. Gang of Four can do abrasion — “Why Theory?” is jagged like the Fall — but the bulk of Solid Gold shows off the sharpness of their musicianship.

Solid Gold suggested Gang of Four had some artistic staying power, but that proved inaccurate. Bassist Dave Allen left the band before the next album, beginning the splintering that would lead to the band’s initial dissolution before the nineteen-eighties reached its midpoint.

Widely considered to be the debut album by the Bongos, Drums Along the Hudson is more accurately described as a compilation, assembling the first singles and connected recordings by the Hoboken band. To a degree, its the vivid, consistent realization of the lithe, lively sound conjured up by the Bongos that makes the sides full of bits recorded over the course of a couple years come across like a firm statement made in a single prolonged studio effort. This is the way a record should sound.

Opening with the joyously headlong “In the Congo,” Drums Along the Hudson cavorts across fifteen sterling pop songs (including a peppy cover of T. Rex’s “Mambo Sun”), never letting the spirit lag. Even when the sonics darken, on “Video Eyes,” it’s the most cheery version of menace imaginable. There are mild variations to be found — filty post-punk on “Automatic Doors,” the loosely probing “Zebra Club” — but the chiming “Glow in the Dark” is a more accurate measure of the Bongos’ sound. Suggesting there may have been some stimulants infested the New Jersey waters at the time, “Certain Harbours” lays out a crazy Feelies rhythm and then dollops on bendy musical cracklings imported from abstract jazz, and “Three Wise Men” also calls to mind the jittery band from about twenty miles north.

Drums Along the Hudson — along with the following year’s EP, Time and the River — helped the Bongos get noticed by music biz bigwigs. Before long, they were signed to RCA Records and working on new music in posher accommodations. Greater success was to come.

Hardly haggard old souls, the Undertones were nonetheless pointedly starting over on Positive Touch. The third full-length album from the Irish punk new wavers was their first after extricating themselves from a contract with Sire Records, following public grousing over the label’s subpar efforts in promoting the band’s musical output. Freedom had its own cost, though.

“As we had left Sire we were footloose and fancy-free, which was all well and good but it also meant we had to pick up the bill for the recording sessions,” bassist Michael Bradley wrote in his memoir.

The band took the material to EMI, which agreed to release the album. In an interesting measure of the way the Undertones’ new corporate home was willing to view the band’s ambition and output, the label heads immediately identified “It’s Going to Happen!” as the ideal lead single. In opposition to the previous output of the Undertones, which skewed toward the basic pop subjects of young love and teenage rebellion, “It’s Going to Happen!” directly addressed the political violence in the band’s home country. Specifically, the song was about the Hunger Strike of 1981.

The Velvet Underground reminiscent “You’re Welcome,” Merseybeat-ish “Crisis of Mine,” and loose and jazzy “Sigh and Explode” also showed a newfound interest in the Irish Troubles. There was more standard fare on the record, too. “Julie Ocean” borrows from dreamy nineteen-sixties rock, “His Good Looking Girlfriend” hits the XTC sweet spot of agitated pop with a sardonic story, and “I Don’t Know” nestles lead singer Feargal Sharkey’s best John Lydon trill in a brisk, jaunty tale of broken romance. It’s all terrific.

The new label may have been supportive, but they didn’t exactly transform the commercial showing of the Undertones. The album and its singles fared about as well as the band’s earlier efforts. The Undertones managed only one more album before dissolving, at least until the inevitable reunion efforts came around several years later.