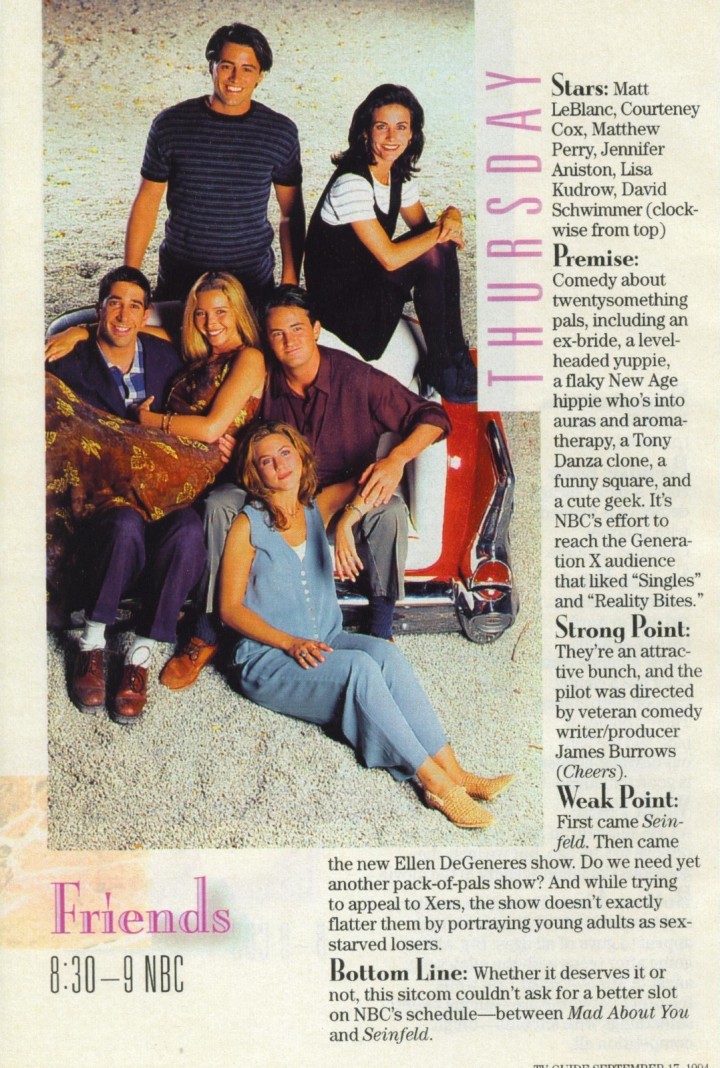 On the occasion of Netflix sending about seventeen boxcars crammed with small bills in the direction of WarnerMedia to keep streaming rights to Friends, this was my attempt a few years ago at writing about the bygone hit sitcom, as part of the “Flashback Fridays” series at my former digital home. This, I must note, was a precarious task for me, since any assertions I made faced the sure scrutiny of a true expert. I don’t remember what she though of this brief consideration. In truth, I’m a little afraid to ask.

I was about a year out of college when the TV series Friends made its debut, making me a twenty-something just beginning to figure out my place in the world and leaning on my closest compatriots when things got too challenging and confusing. And that’s exactly what I saw when I looked at this show. Maybe I was projecting a little bit. After all, about half the characters were toiling in occupations that implied a certain amount of settled stature — upscale chef, paleontologist, indeterminate business executive — and they were all subsisting with few indications of strife. They lived in the safest, smallest version of New York City imaginable. It looked more like the clean-scrubbed capital city I lived in than any iteration of the biggest metropolis in the nation I’d ever seen on screen before. They drank coffee and traded jokes and wondered about how their romantic prospects might pan out. Add in a little more beer and a tendency to spend weekend nights watching They Live and it could have been my clan.

As I recall, one of the most common complaints when the show premiered and started racing up to the top of the ratings was that the characters didn’t talk like real people, as if the gag machines on other sitcoms were somehow the height of verisimilitude. Thing was, at the height of their verbal one-upmanship, the characters in Friends sounded exactly like my friends. The happy irony, offbeat absurdism, media savvy, and collegial jabs were the grammar of our banter. Some of the push back against the tone and tenor of Friends was the commonplace animosity my generation voiced anytime a piece of entertainment was said to represent our norms and behaviors. Friends got reflexively dumped into that category for a time, but in short order it transcended that to become a sitcom institution, maybe the last of its kind.

There have been other hit shows since, of course, and even other comedies that captured attention, but I think Friends arguably represents the last gasp of hip, appointment television, the sort of thing that NBC could accurately label “Must See TV.” The show didn’t exactly have an edge to lose, but it certainly got more comfortable in the manner of all long-running shows, playing on the most familiar elements of the characters and their tried and true situations rather than springing the unexpected on the audience. It was reliable, warm, dependable. It was there for us. And we were there for it, too.