College programmers who first dropped the needle on the self-titled debut of Bleached Black might have been expecting to get a sweeping dose of glorious goth music. Instead, the band from New Haven, Connecticut resides squarely in the mid-nineteen-eighties college rock milieu of chiming, jangly guitars and straightforward pop-rock songs seemingly engineered to hold the attention of cheerful beer-swillers in a bar’s back room. “Wrist Slashing Romance” might bear a title that calls to mind black lipstick and gloomy rooms, but the actual cut bears more of a resemblance to the Smithereens in their melancholy mode, at least before shifting to a toned down metal gurgle in its second half.

With its wobbly harmonies, perpetually soaring melody, and squalling guitars, “Chelsea” one of those cuts that could be played to explain college rock to a confused neophyte, and the earnest roots rock of “I Was in Your Life” is in the mode of the Del Fuegos at their Miller High Life comfiest. The band shows they know how to toughen up, as with the swirling, snarling “Let Me Take the Time” or “Morning Sun,” which sounds a little one of the instances when Hüsker Dü turns down the volume and slows the pace.

Bleached Black feels like a solid starting point for a band capable of banging out a few small gems. Instead, it was the sole full length outing for the group. They became another in a long line of college radio might-have-beens.

The Jam worked at a blistering pace across the end of the nineteen-seventies. It’s understandable that there were occasionally signs they were having trouble keeping up. Setting Sons was their fourth full-length studio effort in a span of two-and-a-half years. The record is often smashing, but there is also an aura of unraveling ambition. The album feels like a document of a band with about a million things to say and not quite enough time in which to say them.

For one thing, Setting Sons was reportedly intended to be a concept album, but the band was ushered into the studio with only about half as much material as they needed. As recording sessions proceeded, frontman and chief songwriter Paul Weller grew disenchanted with some of the in-progress tracks, leading to minor scrambles to find the requisite amount of new recordings to fill out both sides of the record. That’s precisely the situation that leads to an entirely superfluous cover of the Motown standard “Heat Wave” landing like an anvil.

Of course, it’s not necessarily true that the necessary time to execute their initial plans would have resulted in a great album anyway.  “Little Boy Soldiers” strikes me as one of the likelier remnants of the concept album plan A, if only because of the production that recalls the Who’s Tommy. The song isn’t bad, but it also skirts pretension. The Jam hit too hard for that sort of persnickety business, and there are plentiful examples of their ferocious mod rock certainty on Setting Sons, such as layered, thunderous “Thick as Thieves” and the tuneful class agitation “The Eton Rifles.” “Burning Sky” sits so snugly in the band’s sweet spot that it could have been crafted in response to some fanciful need for a representative example of a Jam song to sit in the middle of a showroom floor.

If Setting Sons carried some compromise in its grooves, that didn’t slow the upward arc the Jam was enjoying commercially. It was the band’s highest charting album to that point in both the U.K. and the U.S. 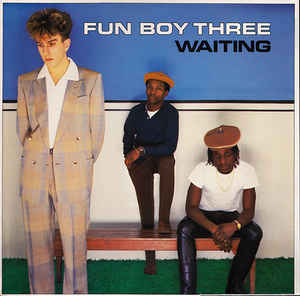 ”It shows we have grown up in a lot of ways,” Fun Boy Three vocalist Terry Hall said of the band’s sophomore album, Waiting, at the time of its release. “We are taking our music a lot more seriously than last year. We were enjoying ourselves and hoping that people were enjoying us.”

Formed by Hall, guitarist Lynval Golding, and percussionist Neville Staple after fleeing the Specials, Fun Boy Three specialized in a a sort of disaffected party music. The band made strident, sparking pop songs that had a layer of frost on them, as if challenging the listener to burrow through the chilly layers to find the heart. That’s a shared characteristic of a lot of British pop, to be sure. Fun Boy Three were simply more convincing than most.

Adding to the crispness, Waiting is produced by David Byrne, at around the same time he was working on the Talking Heads album Speaking in Tongues. The individual tracks are sleek and assured, dispensed with a let’s-keep-this-moving-shall-we? buoyancy. The spirit is encompassed by Fun Boy Three’s version of the Go-Go’s’ hit “Our Lips are Sealed,” transformed into gentle British pop, all refined and detached.

The group might have been an offshoot of the Specials, but there are few hints of the then still commonplace British ska sound. The closest they really come is “We’re Having All the Fun,” which sounds like Madness with the jauntiness dialed down a notch or two. Instead, the trio often seems to be mashing the whole of late-twentieth-century British pop music into a new, tangy slurry. “The Tunnel of Love” suggests Anthony Newley and his ilk costumed up as in new wave garments, and the snappy “The More I See (The Less I Believe)” puts a popping modernity to a more sedate skiffle sound.

They were still making music in Margaret Thatcher’s U.K., so there was bound to be some fretful fervor. It shimmers forward in the lyrics to otherwise easygoing tracks, such as “Things We Do”: “Do hip social workers wear militant badges/ To show their beliefs on their corduroy jackets?/ Do students drive Citroens on their three year courses?/ Do you spend your weekends flogging dead horses?” The lyrics got yet more pointed when Hall turned them to the personal, most notably the direct referencing of sexual abuse he endured during childhood in the song “Well Fancy That!,” which prompted Byrne to marvel at his candor.”He didn’t tell his mum, he didn’t tell his friends, but he’s going to tell everybody,” Byrne said.

Waiting was the final album for Fun Boy Three. Hall, Staple, and Golding stayed prolific in the music business, but went their separate ways, even resisting whatever calls are out there for a reunion, which makes them fairly unique among their peers.

Most famous as a founder and mainstay of King Crimson, guitarist Robert Fripp was a restless and relentless collaborator. In the latter half of the nineteen-seventies, King Crimson was formally on hiatus, so Fripp was even freer than usual to wander. Initially, Fripp had grand plans to mount a thematic trilogy that included Daryl Hall’s solo debut, Sacred Songs, and Peter Gabriel’s second self-titled album. He served as producer on both those records but the larger vision didn’t come together quite as planned. Still, he was left with a heaping mound of interesting material that deserved to go questing for a plan in the cultural territory. Fripp pulled it together and released Exposure, officially his solo debut.

Equal parts caustic and caressing, Exposure is designed to take the listener in jarring, unpredictable directions. It’s a roller coaster run backwards in the dead of night. The album’s deliberately perplexing nature is present on songs sung by Terre Roche that serve as opposite ends of the transition that comes with flipped the record. Side one ends with “Mary,” which suggests a Joni Mitchell cut plucked from a disconcerting limbo, and side two opens with the title cut, Roche wailing against a methodical pop abstraction co-written with Gabriel. Don’t bother getting settled, the divergent tracks warn. Fripp is here to sharpen corners and rattle sensibilities.

Gabriel’s unmistakable presence returns on “Here Comes the Flood,” and Hall shows up repeatedly, most winningly on the Rockpile-esque “You Burn Me Up I’m a Cigarette.” Mostly, the more famous figures do their best to cede the floor to Fripp, and the guitarist lets things get weird. On “Disengage,” he enlists Van der Graaf Generator’s Pete Hammill on lead vocals and comes up with an oddity that manhandles prog rock into a prototype of screamcore. A clear proponent of the more-is-more camp, Fripp often strives for clamor, as with the arty scrawl of “NY3” or “I May Not Have Had Enough of Me but I’ve had Enough of You,” a freakout in the Frank Zappa mold.

Exposure was well-received and Fripp clearly took some satisfaction in releasing product under his own name. A pair of additional solo albums followed over the course of the next two years, before a revived King Crimson reclaimed a sizable chunk of his time.