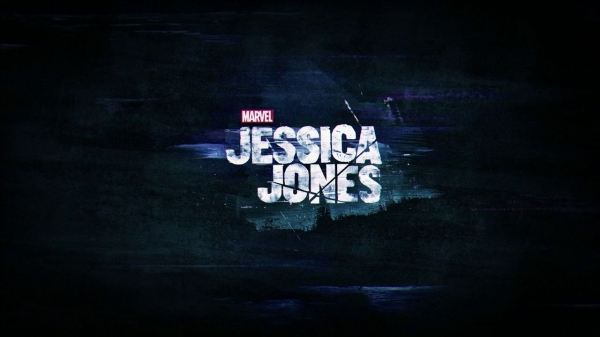 As certainly as Marvel has become an unstoppable force wherever people recline luxuriously in gigantic palaces, the wide-reaching House of Ideas hasn’t quite cracked other media (including some significant slippage in realm of the colorful periodicals of sequential storytelling that are the source of the nearly ubiquitous super-powered characters). The ambitious lineup poised to sprawl across the forthcoming Disney+ streaming platform might very well improve Marvel’s record, but one of the most surprising shortcomings has been in the area of television programming, especially since the studio had a major broadcast network right there at their disposal. Sure, Agents of S.H.I.E.L.D. is about to embark of a sixth season, but it is the closest a long-running series can come to being a cultural afterthought.

I’d argue that the primary instances of success in Marvel Studios’ forays into television are attributable to choices that lean away from the model that works elsewhere. Although the string of episodes that are inherent to the structure of a television series would seem ideal for replicating the procession of storytelling-without-end found in a string of comic book issues, and crossovers are equally easy to mount, the expansiveness that has served Marvel well on the page and in theaters has often been a road anvil blocking the path of smart, effective storytelling when the screen is smaller. One of the rare triumphs points to the potential value of focusing on the intimate when it comes to television projects. 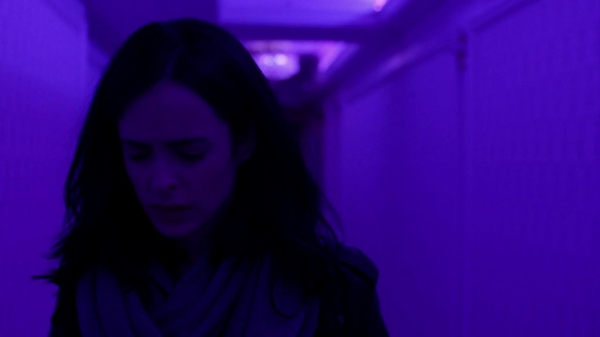 Jessica Jones was primarily drawn from the comic book series Alias, created by writer Brian Michael Bendis and artist Michael Gaydos. The comic was an intriguing novelty when it launched, in 2001. Set within the Marvel Universe proper, it nonetheless stood apart somewhat, offering a cunning commentary of the natural repercussions of a society partially populated by demigodlike vigilantes. Jessice herself was a former costumed do-gooder, known as Jewel, who had retreated from brawls across the metropolitan skies in favor of hardscrabble work as a private investigator. In Bendis’s rendering, which was often dark without resorting to corrosive cynicism, Jessica was both a casualty and a survivor, grappling with a wholly understandable lingering trauma. Usually elided in superhero storytelling founded on perpetual reset, Jessica’s fraught emotional state and perseverance asserted a stronger sense of reality to the Marvel Universe, just as Stan Lee imbuing vulnerability, uncertainty, and other bits of psychological nuance into his characters four decades earlier had started a revolution in comics.

Wisely, Melissa Rosenberg, the credited creator of the Netflix series Jessica Jones, kept the fundamentals of the character and figured out how to craft her story for a different medium. In the show, Jessica Jones (Krysten Ritter) is still a bedraggled P.I. with a set of heightened abilities that she largely keeps in check. There are allusions here and there to other bolstered beings engaged in avenging across the globe, but mostly Jessica Jones keeps its attention on street-level concerns. The now familiar Marvel logo is affixed to the series, but it largely stands alone. It is a character study with periodic feats of strength. 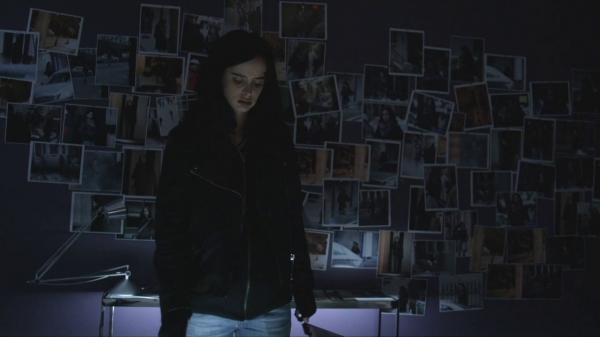 And the first season of Jessica Jones has a deeper thematic purpose that also sets it apart. Drawing from a story thread in the original comic book series, Jessica has a troubling history with a villain with mind control powers. Known primarily as the Purple Man in the comics, the television creators opt instead to concentrate on alter ego moniker, the still pretty on-the-nose Kilgrave (played by David Tennant). Usually, the results of Kilgrave’s mental manipulations were brushed off in comic stories as the equivalent of bruises, merely the cost of doing superheroic business. The insightful innovation of Bendis was that having one’s will wrested away by other leads to significant psychological pain. The creative team behind Jessica Jones heightened and intensified that theme in season one, making Jessica’s helplessness before Kilgrave — and his obsession with controlling her — a powerful stand-in for any number of toxic relationships that exist in the real world, where there’s a sad lack of caped crusaders ready to swoop in and save the day. 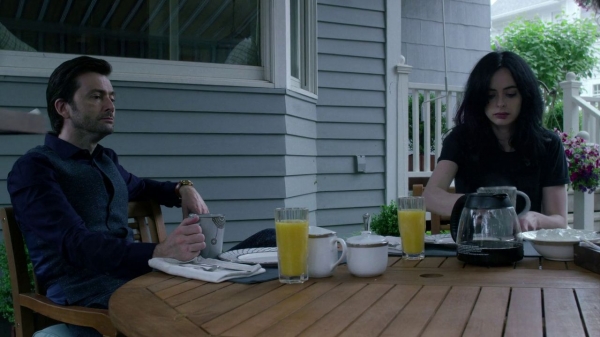 With thirteen episodes to play with, there’s more to the first season of Jessica Jones than the cruelty of Kilgrave and Jessica’s strained effort to best him, mostly by breaking free. There’s a tentative romance between Jessica and fellow titan-in-hiding Luke Cage (Mike Colter) and a scattering of fellow misfits under Jessica’s reluctant care. A great deal of time is given over to simply establishing Jessica’s weary, sarcastic worldview, which plays to Ritter’s greatest strength as a performer. And there are parallels to the chief adversarial relationship throughout, notably in the baggage carried by Jessica’s friend Trish Walker (Rachael Taylor) because of the way her controlling, abusive mother (Rebecca De Mornay) pushed her into a career as a child star. A caution is underlined: Super-human abilities aren’t a requirement for harming people.

The messages embedded in the first season of Jessica Jones might not be exactly what audiences are expected from a story about superheroes, even if its those pumped-up beings that operate on the fringes of a colorful world. It’s precisely that unexpected quality that gives the program its intense impact and resonant meaning.

(Due credit on the screencaps: I got them from elsewhere.)