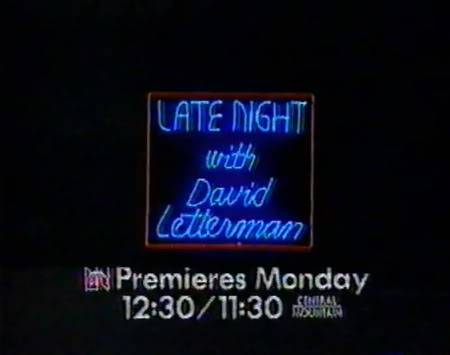 On the occasion of the announcement of the second season premiere date for David Letterman’s Netflix program, I luckily have this archival piece loaded up and ready to go. Written for the “Flashback Fridays” feature I mounted at my former online home, this was one of several attempts I made at reckoning with the enormous influence Letterman and his NBC program (and, to a lesser degree, his follow-up on CBS) had on my comic and creative sensibilities.

I should acknowledge this piece was going to post (or re-post, in a way) today regardless of the actions of Netflix’s PR department. After launching the “In the Archive” feature several years ago to mine old writing efforts, I think I’ve basically run out of words to import to this space. I may revive it periodically if I ever stumble upon any other dusty pieces of writing (there are loads of old reviews from my radio movie reviewing days that I haven’t physically unearthed, but I’m hoping still exist somewhere in my household’s deep storage), but I’ve got something else in mind for Saturdays moving forward. But that’s next week….

It made no sense for David Letterman to get a job hosting a new late night talking show to air following the enduring institution of Johnny Carson’s Tonight Show. While a favorite of Carson, who had an astounding level of clout at NBC (and really in show business in general) in the early eighties, Letterman had already endured one disastrous failure at the network with his short-lived morning talk show. To many observers, creating the program Late Night with him and for him was just transplanting a known mistake to a different time of day. Instead, the show simply changed comedy.

It was a splendid contradiction from the beginning with Letterman taking a chainsaw to the very conventions of a late night talk show even as he so clearly revered them (I suspect he’d take greater umbrage at someone speaking unkind words about Carson than a person slinging insults at his mom). The show was greatly informed by the brilliant deadpan absurdity of head writer Merrill Markoe as filtered through Letterman’s unique sensibility, an appreciation of the purely goofy mixed with an an especially aggressive brand of irony. He also had an purely Midwestern uptight approach to the guests on the show which made his celebrity interviews a little awkward and the interviews with borderline crackpots wildly entertaining. In fact, during the earliest years of the show, when big name bookings were hard to come by, the producers discovered there were few things funnier than Letterman thrown into complete discomfort by a guest, meaning a steady parade of the likes of Dr. Ruth Westheimer, Brother Theodore, and Harvey Pekar.

After taking a crack at sitcom guest spots and a turn as as a member of a variety show troupe, it was clear that something different was needed for the gap-toothed comic from Indiana. Basically, showbiz had no place for David Letterman, so he had to invent his own. And Late Night was a constant source of amazing comic invention. The current overpopulated landscape of late night talk shows is currently marked by a smothering control of the proceedings, but Late Night felt spontaneously and unpredictable. Any gag was fair game, and pushing against the very form of the show was the greatest gag of all. Letterman once did an entire show from the confines of his office, an experiment that culminated with regular guest Teri Garr taking a shower in his bathroom. The camera might rotate, a fountain of wine might be installed in front of his desk, they might leave the progression of the show up to audience vote. In some ways, the creation of the Top Ten Lists was the worst thing that could have happened to the show. It provided a structure that was confining, a recurring obligation that blunted the need for fresh creativity. It’s a problem that those working on the show recognized at different times, trying to discard the concept occasionally over the years, only to be forced to revive it due to its popularity. It was a sign that the show and Letterman’s comedy was moving from upstart to institution.

Without Letterman and his groundbreaking show, comedy would look very different now. I’m convinced that shows like The Simpsons, Arrested Development, 30 Rock and others that stood somewhat outside of themselves as they delivered wry commentary on the foibles of their characters would have never come into being, or at least would have been incredibly different. Despite their emphasis on the sort of deep news coverage that never interested Letterman much back in the day, there may be no clearer progeny of Letterman’s Late Night than The Daily Show with Jon Stewart and The Colbert Report. They are shows about being a show where the comedy is self-commentary. Even the correspondents have a certain Larry “Bud” Melman quality about them.

The show may not have arrived with the greatest fanfare. Instead, it was sort of friendly shrug, which took the pressure off, made it seem like it could be anything Letterman and his crew wanted it to be. That’s what made it free, and that’s what made it great.