When I committed wholeheartedly to superhero comics, it was difficult for me to explore other divergent — even slightly divergent — areas of sequential-art storytelling. This was a time — the nineteen-eighties — when the emergence of shops specializing in comic books meant there was a sudden boom of of strikingly different material to be had, often wrapped somehow in genre, but cutting against the normal path of costumed do-gooders streaking across the sky in service of cozy good-guys-vs.-bad-guys narratives. As true as it was that independent publishers did most of the heavy lifting, there were flickers of strangeness to be found among the roster of titles offered by the big two companies. And few were stranger than Swamp Thing as written by Alan Moore.

For a long time, I’d heard and read about Moore’s Swamp Thing, but I hadn’t sampled it, out of a combination of limited funds, marginal access, its status as a title published by the distinguished competition to my chosen house of ideas, and a touch of worry that my skittish sensibility might not be equipped to weather the reported horrors inside those pages. I finally snagged my first issue after trading in a bunch of my old comics to one of the behemoth national-presence comic stores. Understanding my own limitation and the need to perhaps ease my way into this bizarre corner of the DC Universe, I opted for a story that included the fairly fair instance of a more mainstream hero tangling with the muck-covered swamp dweller. So there in the shipment of coveted new comics sat a copy of Swamp Thing #53 with none other than the caped crusader on the cover.

I had only a passing familiarity with the lore around Swamp Thing, originally created in the nineteen-seventies by writer Len Wein and artist Bernie Wrightson, and I knew even less about the ways Moore had turned the character’s history topsy-turvy after taking over the title. But this was still in the era when comic book creators were constantly committed to bringing new readers quickly up to speed, under the tenet that every issue was someone’s first issue.  And Swamp Thing was clearly as much about mood and tone as the mechanics of plot, as emphasized by the rich, emotive, trippy artistic renderings of John Totleben. 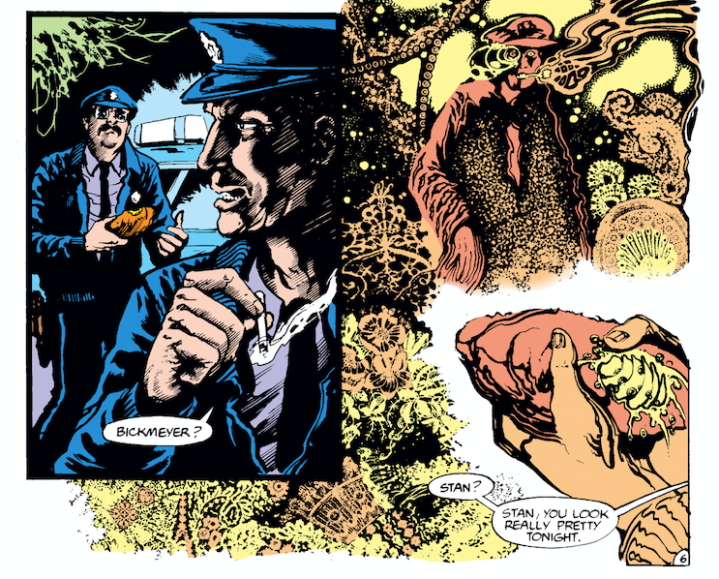 If a Gotham City beat cop munches on one of the hallucinogenic tubers shedded periodically by Swamp Thing, he’s going to see some funky things.

The story was also easy to lock into because of the classic concerns favored by Moore, even as he twisted them is entirely novel ways. Swamp Thing is engaged in a tragic romance with Abby, a human with with her own arcane abilities. That provides all the motivation that’s needed in the issue. Swamp Thing is upset that Abby has been taken into custody by Gotham City authorities, so he uses his elemental powers to take over the town, enveloping the metropolitan structures in thick greenery. He’s essentially engaged in an act of terrorism, itself a strong indicator of the more complicated view to the moral universe of superhero comics taken by Moore.

Swamp Thing’s actions of course run him afoul of Batman, Gotham City’s protector. Batman is good in a fight, but even he is going to struggle against a foe who can grow at will, even replicating himself into a hive mind mob.

Although the horror elements are somewhat toned down in this issue (emphasis on “somewhat”), I could recognize this comic was wildly different than anything else I was reading at this point. It was merely dark. It was fiercely intelligent in every respect: Totleben’s manipulated images driving the storytelling, Moore’s dense and fevered language, the uncompromising floridness of its emotions. It was high opera transmogrified to panels on a page, with modern myths acting out the drama. It was scary, funny, romantic, poignant, angry, cynical, and enthralled with possibility all at once. I adored it, and I could barely wrap my head around it, a common combination, I would come to find, when I engaged with the work of Moore.

In the oversized issue, Swamp Thing’s conflict with Batman comes to a close, mostly because the mossy creature achieves his goal. And the issue ends on a harsh cliffhanger, but the normal come-back-next-month enticements mattered little to me. I didn’t start buying and reading Swamp Thing at this point, because I instinctually felt it would do a disservice to what Moore and his cohorts were creating. This wasn’t a story to engage with whenever I happened to see an issue on the spinner rack. While retaining the episodic nature of the form, Moore’s Swamp Thing demanded it be taken in whole. It was all or nothing, and it would be quite some time before the model of comic book publishing evolved to truly accommodate the “all.”

Eventually, I read Moore’s contribution to the Swamp Thing mythos, start to finish. As expected, it was a powerhouse, and it felt right to wait until the conditions were as close to ideal as possible. Although I loved them, I realized superhero comics retained a certain amount of their original DNA as disposable entertainment. Moore, with Swamp Thing, provide one of the earliest instances when I started to see how comics, no matter how fantastical the characters populating them, had a shot at truly being art.