Cop Car (Jon Watts, 2015). Like the product of a mysterious third Coen brother who got some of Steven Spielberg’s DNA spliced into him in utero, Cop Car begins with a simple premise, predicated on the wonderstruck and impulsive decision making of young boys. While running away from home, Travis (James Freedson-Jackson) and Harrison (Hays Wellford) come across an empty police cruiser on the side of a remote road. They decided to take it for a joyride, which causes consternation for the crooked law enforcement officer (Kevin Bacon) who should have locked his doors before wandering out to engage in some foul doings in the woods. Director Jon Watts (who’s co-credited on the screenplay with Christopher Ford) demonstrates a smart, clear storytelling style, and he does well with the young actors. Bacon leans on the villainy of his character a little too hard, but there’s an effective supporting turn from Shea Whigham, who continues to build an impressive repertoire of mildly cloddish men in over their heads.

The Predator (Shane Black, 2018). The compulsion to reanimate every last cinematic property from the nineteen-eighties that has even a shred of name recognition comes around, yet again, to the marauding space monsters with a talent for blending into their surroundings. There are a few fun passages in the first half, mostly due to Shane Black’s whole Joss-Whedon-with-a-dirty-mouth approach to scripting. Mostly, though, I want to concentrate on the performance of Olivia Munn, as Casey Bracket, an evolutionary biologist plucked off the campus of Johns Hopkins to help study the fearsome creature. In addition to the multitude of well-documented indignities she faced during the shoot and the later press rollout, Munn is laden with line after line of absolutely impossible dialogue, including:

Munn doesn’t exactly make any of these lines work, but they don’t sink her either. And fighting to a draw seems the best possible outcome under the circumstances. So bravo to Munn, the one true hero of The Predator. 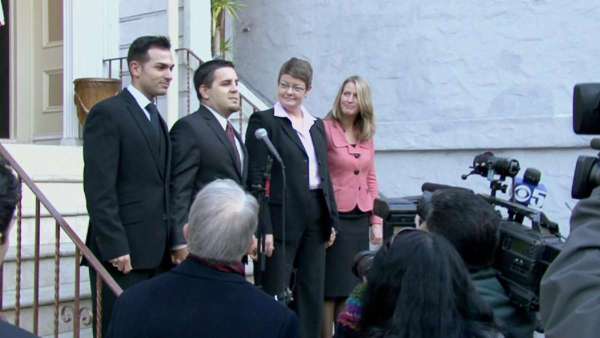 The Case Against 8 (Ben Cotner and Ryan White, 2014). This finely constructed documentary benefits enormous from candid access to the four plaintiffs who came together to legally challenge California’s regressive, bigoted Proposition 8 after it passed in the 2008 election. Directors Ben Cotner and Ryan White also give a significant amount of screen time to off couple attorneys David Boies and Ted Olson, who were on opposite sides of the deeply destructive Bush v. Gore before improbably teaming to fight on behalf of same-sex marriage. For all its admirable qualities, The Case Against 8 can often come across as only surface-deep, in part because it assumes an automatic political alignment between the filmmakers and the viewers. The theory is probably sound, but it’s just as deadening a filmmaking choice here as it is in one of those pieces of offensive agitprop made by right wing nuts. There’s undeniable value in simply capturing the steps taken by everyone involved on the correct side of this litigation, and the film does that with a keen attention and an honorable sympathy. The documentary stands as a useful piece of a larger lesson.