There was a point when music artists of a certain stature couldn’t simply release a new record. An extra level of import was required, and so singer-songwriter Dan Fogelberg followed his greatest commercial success to that point, the 1979 multi-platinum release Phoenix, with a sprawling double album that he termed a sixteen-part “song cycle” about the gradual erosion of childhood innocence. Although concept albums were fading in stature by the early nineteen-eighties, their off-putting pretension countered by the brisk joys of new wave, The Innocent Age proved to be another major hit for Fogelberg, placing three singles in the Billboard Top 10 and again moving millions of copies.

The album opens with Fogelberg playing the sprightly troubadour “Nexus,” complete with ponderous lyrics that might make the members of Jethro Tull call for a rewrite (“And balanced on the precipice/ The moment must reveal/ Naked in the face of time/ Our race within the wheel”). The track is reasonably emblematic of all that follows. While there are occasional cuts that take a bit of rock ‘n’ roll ballast (“Lost in the Sun” sounds like the missing link between the jangle folk rock of Jefferson Airplane and the thudding excess of Jefferson Starship), most of the material is wispy as tracing paper. “The Sand and the Foam” is pure treacle, and wan ballad “Only the Heart May Know” is beyond saving, even by the considerable charm and warmth of Emmylou Harris as a duet partner. The Top 10 singles — “Leader of the Band,” “Same Old Lang Syne,” and “Hard to Say” — collectively stand as the epitome of mellow pop.

The double album’s supposed thematic unity somehow still allows for Fogelberg to give a home to some of his songwriting strays. “Times Like These” appeared on the Urban Cowboy soundtrack one year earlier, and “Run for the Roses” was commissioned by ABC to accompany broadcasts of the Kentucky Derby, allowing Fogelberg to croon lovingly to a horse (“The sun on your withers / The wind in your mane / Could never prepare you/ For what lies ahead”). The tepid theatricality found on “The Lion’s Share” and “Ghosts” echo the intricate music box pop of Harry Nilsson, at least if his records were cloying and bad.

The Innocent Age represents Fogelberg’s commercial peak, in part because his output slowed. It would be three years before his next studio album, and the pop music landscape changed significantly during that time. Subsequent releases settled for lower and lower peaks on the charts, until Fogelberg essentially became a nostalgia act. He passed away in 2007, after an extended battle with prostate cancer.

Comprised of only two members, Bryan Harvey on guitar and Johnny Hott on drums, House of Freaks made a splendid racket. The duo’s debut, Monkey on a Chain Gang, is filled with tracks that are potent enough to disguise the fact that there’s not a large outfit banging out the songs. The band sounds lean, but not understaffed. Heightened by Harvey’s rich, keening vocals, the material is consistently forceful.

Without feeling particularly beholden to one bygone style, House of Freaks give the impression that they’re bringing the sum total of rock history into the songs they craft. There’s a clear retro guitar prowl on album opener “Crack in the Sidewalk” and a jabbing, blues ferocity to “You Can Never Go Home,” but more often the influence is less overt. Theres also a smacking modernity that made it easy for these cuts to settle snugly into a college radio playlist.  “40 Years” wouldn’t be out of place on a classic Squeeze album, and “My Backyard” sounds like members of Guadalcanal Diary and the Replacements decided to form a college rock supergroup.

Monkey on a Chain Gang is absolutely loaded, boasting thirteen tracks, not a single one disposable. “Black Cat Bone” is raw and insistent, “Yellow Dog” careens with thrilling velocity, and “Monkey’s Paw” is starkly enticing. Across the tracks, House of Freaks plays with a concentrated energy, as if trying to put every last ounce of themselves on record just in case they didn’t get a chance to make another one. That would have been a reasonable fear, considering the band a rare current act signed to Rhino Records, then as now specialists in colorful reissues. There were more records to come, though, all of them dandy.

Unfortunately, the House of Freaks story ends in tragedy. In 2006, Harvey and his family were victims of a brutal crime when two men invaded their home, killing everyone inside and then trying to cover their crime by setting the structure ablaze. It was Hott who saw the flames and alerted the authorities, leading to the discovery of the crime scene. 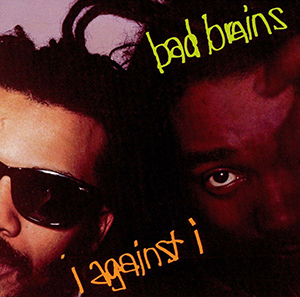 According to producer Ron Saint Germain, I Against I, the third release from Bad Brains, was recorded on a shoestring budget. Saint Germain came to the job straight off of studio duties on the one and only album from Duran Duran offshoot band Arcadia, a project where money was essentially a fungible commodity. When Saint Germain was initially told the total allotment of dollars available for I Against I, he assumed it was meant to cover the recording of a single track. Extreme austerity was simply the prevailing model used by the band’s new label, SST Records.

If the lean finances had a negative impact on Bad Brains, it’s absolutely indiscernible on I Against I. The album is absolutely titanic in its outlook and impact, building on the band’s hardcore roots to deliver a set of songs that practically trembled with unpredictability. As an early example in the track listing, Bad Brains packs an album’s worth of shifts onto the title cut. They unleash weirdo metal on “Return to Heaven” and, on “She’s Calling You,” forecast the hard rock and funk combo that would briefly lift Living Colour to rock star status.

For all the bracing sonic wanderings of the album, I Against I is mostly notably for the sheer power flashed by the band, offering the reassurance that punk was always going to be the prevailing piece of their musical personality. There’s the marvelous rockslide of noise that opens “House of Suffering” and the echoing dread on “Secret 77.” In its combination of hardcore hurtling and expert melodizing, “Let Me Help” recalls Hüsker Dü, circa Zen Arcade. Like that exalted Minneapolis trio, Bad Brains deserved breathless plaudits for their fearless creativity.

Impressive as I Against I consistently is, there was wearying drama behind the scenes. Lead singer H.R. experienced one of his regular bouts of dissatisfaction and quite the band not long after the album’s release, leaving some of the tour dates in support of I Against I to replacement Taj Singleton. There were more albums to come, and the personnel tumult following I Against I became as much of a mainstay as the thunderous guitars and pounding drums. Part of the strength of the Bad Brains records, especially I Against I, is that the surrounding messiness is entirely incidental.

When the Pandoras signed with Rhino Records, Paula Pierce decided it was time to start over. The frontwoman and chief songwriter for the band, Pierce fired her bandmates and brought in new recruits, briefly leading to a stretch when her disgruntled former cohorts played gigs and recorded music under the Pandoras name, apparently in part to spite her. It was Pierce whose name was on the bottom line of the record deal though, and her version of the group went into the studio with producer Bill Inglot. Stop Pretending, officially the Pandoras’ sophomore full-length, was the result.

Pierce and the Pandoras were expert revivalists, playing a brusque, tough-minded garage rock that could have been airlifted in straight from the late nineteen-sixties. The chunky guitars on “I Didn’t Cry” and the splendid drum and organ interplay on “I’m Your Girl” testify to the band’s fine musicianship, and the tuneful “Anyone But You” is equally iron-clad evidence of the skillful songwriting at play on the album. “You Don’t Satisfy” cuts like a jagged razor, and “Let’s Do Right” pops assertively, suggesting the Bangles if every last one of them was balancing a hefty chip on their respective shoulders. The sunshine-dappled title cut hits the same sweet spot that the Primitives found a couple years later, and thrashing album closer “It Felt Alright” offers the Yin to that Yang.

Perpetually unsettled, the Pandoras left Rhino Records after the release of Stop Pretending, believing they’d have better luck on Elektra Records. Instead, their attempts to make a new album were thwarted. The Pandoras were dropped and wound up briefly on Restless Records, releasing one EP before disbanding. One year after the group broke up, Pierce suffered a brain aneurysm and died. She had celebrated her thirty-first birthday less than two months prior.