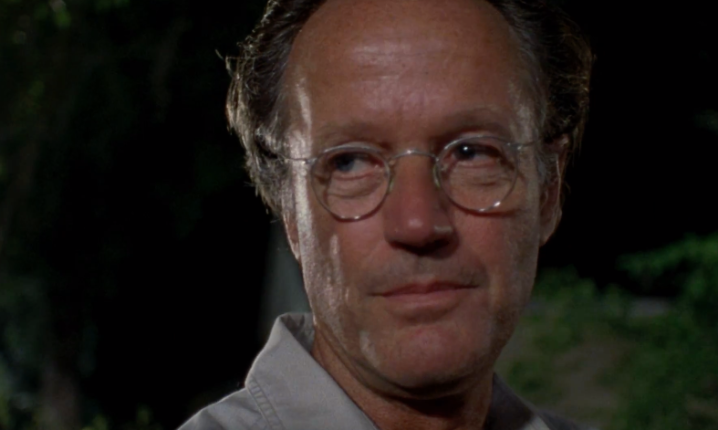 For most of his tenure as a public figure, Peter Fonda was a better icon than actor. He served as the more genial familial representative of the counterculture, the harmless hippie alternative to his more militant sister, Jane. He might have had a prominent part in one of the signature films of the rebellious late-nineteen-sixties, but he wasn’t actually challenging the power structure in a meaningful way. His every molecule exuded a go-along-to-get-along ethos, at least until some flickers of fire emerged in his old age. The contrast in acting styles between the two siblings followed a similar pattern: Jane was a revolutionary, and Peter mostly liked to drive real fast.

That relative withdrawal onscreen could also serve Peter Fonda well, as demonstrated by his eloquent performance in the 1997 drama Ulee’s Gold. In the film, Fonda plays Ulee Jackson, a beekeeper living in the Florida panhandle. A widower, Ulee has been unexpectedly charged with taking care of his two granddaughters, teenaged Casey (Jessica Biel) and ten-year-old Penny (Vanessa Zima), in place in his incarcerated son (Tom Wood) and his absent daughter-in-law (Christine Dunford). Ulee reluctantly agrees to retrieve the girls’ mother from Orlando, where she’s suffering from the ill effects of drug addition. In the process, Ulee gets entangled with dangerous figures, essentially finding himself forced to contend with the aftershocks of his son’s crimes.

Writer-director Victor Nuñez keeps the escalating drama at low hum. Rather than constructing bombastic happenings, he’s interested in the small ways people can be tested, especially when they exist well apart from any of society’s power structures. The approach provides ample room for the actors to express the humanity of their characters, and no one in the film does it with greater intricacy than Fonda. Inspired in part by the reticence of his famed father, Fonda makes Ulee a fully formed individual while often showing very little. He’s terse and undemonstrative, but also sharply clear in expressing his worldview. The weariness of a life that has taken unexpected, unfortunate turns in clear, as is the simple perseverance of the man, informed by a professional commitment to tend to his insect charges no matter what distractions arise. Ulee endures.

Fonda is especially strong in the scenes with Zima, meeting the young girl’s queries with a plainspokenness that carries its own warmth, even as Ulee’s demeanor is a little distant. In explaining his work to her, Ulee is really explaining himself, sharing his ethics, his humility, his sometimes thwarted attempts at finding contentment to replace his heartbreaks. The reluctance is part of the admission of his being, but the fact that he’s pushing past his sense of isolation to respond is an expression of hope in togetherness, in family, in love. With tender empathy and brave subtlety, Fonda makes all of this piercingly true. In Ulee’s Gold, Fonda manages to show what it looks like — or, more importantly, what it feels like — when wisdom slowly grows into something as real and sweet as a droplet of honey.

About Greatish Performances
#1 — Mason Gamble in Rushmore
#2 — Judy Davis in The Ref
#3 — Humphrey Bogart in Casablanca
#4 — Kirsten Dunst in Eternal Sunshine of the Spotless Mind
#5 — Parker Posey in Waiting for Guffman
#6 — Patricia Clarkson in Shutter Island
#7 — Brad Pitt in Thelma & Louise
#8 — Gene Wilder in Willy Wonka & the Chocolate Factory
#9 — Jennifer Jason Leigh in The Hudsucker Proxy
#10 — Marisa Tomei in My Cousin Vinny
#11 — Nick Nolte in the “Life Lessons” segment of New York Stories
#12 — Thandie Newton in The Truth About Charlie
#13 — Danny Glover in Grand Canyon
#14 — Rachel McAdams in Red Eye
#15 — Malcolm McDowell in Time After Time
#16 — John Cameron Mitchell in Hedwig and the Angry Inch
#17 — Michelle Pfeiffer in White Oleander
#18 — Kurt Russell in The Thing
#19 — Eric Bogosian in Talk Radio
#20 — Linda Cardellini in Return
#21 — Jeff Bridges in The Fisher King
#22 — Oliver Platt in Bulworth
#23 — Michael B. Jordan in Creed
#24 — Thora Birch in Ghost World
#25 — Kate Beckinsale in The Last Days of Disco
#26 — Michael Douglas in Wonder Boys
#27 — Wilford Brimley in The Natural
#28 — Kevin Kline in Dave
#29 — Bill Murray in Scrooged
#30 — Bill Paxton in One False Move
#31 — Jennifer Lopez in Out of Sight
#32 — Essie Davis in The Babadook
#33 — Ashley Judd in Heat
#34 — Mira Sorvino in Mimic
#35 — James Gandolfini in The Mexican
#36 — Evangeline Lilly in Ant-Man
#37 — Kelly Marie Tran in Star Wars: The Last Jedi
#38 — Bob Hoskins in Who Framed Roger Rabbit
#39 — Kristin Scott Thomas in The English Patient
#40 — Katie Holmes in Pieces of April
#41 — Brie Larson in Short Term 12
#42 — Gene Hackman in The Royal Tenenbaums
#43 — Jean Arthur in Only Angels Have Wings
#44 — Matthew Macfadyen in Pride & Prejudice