Since great television comedy always begins with the script, this series of posts considers the individual episodes that have claimed the Primetime Emmy Award for Outstanding Writing for a Comedy Series over the years. 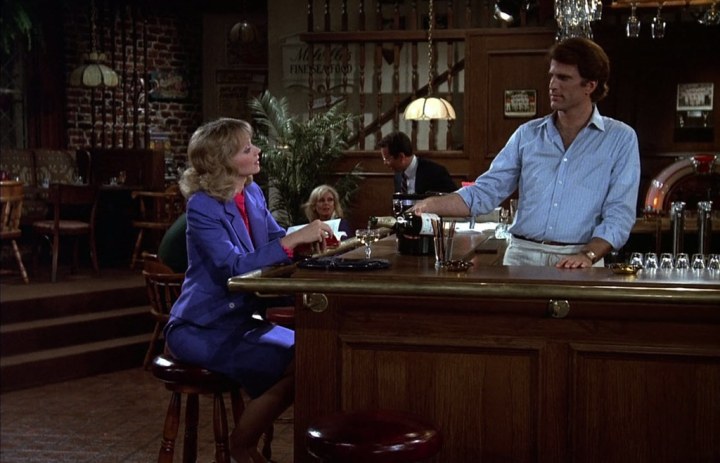 Cheers starts with an underage drinking joke. The first cold open of the pilot episode finds Sam Malone (Ted Danson) going through the process of getting his friendly neighborhood drinking establishment ready to open for another day of business. Sam’s first potential patron, a teenage boy (nineteen-eighties sitcom regular John P. Navin Jr.), bellies up to the bar and proffers a fake I.D., laughing with mock appreciation at the very notion of being asked to prove his age. “Wait ’til I tell the missus,” the boy says.

It’s that boy who literally ushers in the animating relationship. After Sam send the attempted illegal drinker on his way, the exiting boy holds the front door open for the day’s next two customers: Professor Sumner Sloan (Michael McGuire) and his new fiancee, Diane Chambers (Shelley Long). The creators of Cheers later acknowledged one of the major advantages of setting the series in a bar was that it was incredibly easy to set into motion each episode’s story. Whoever they needed simply walked through the front door. The strategy worked from the jump.

Titled “Give Me a Ring Sometime,” the Cheers pilot is remarkable for the immediate clarity of its vision. This isn’t a show taking tentative first steps or showing any signs of needing to find itself. The episode contains practically every element — of tone, of sensibility, of timing — that became familiar as the show stretched over hundreds of episodes and eleven seasons. The characters are introduced with brisk efficiency, each major figure in the series wholly graspable after a scene or two. As should be expected, performances would grow more nuanced and refined, and extra layers would be added to the roles. But identities are firmly in place before the first half hour is up.

Not many viewers were privy to the excellence of Cheers, at least at the beginning. The show struggled in the ratings, finishing its first season ranking seventy-fourth in the ratings, out of ninety-nine series. NBC, deep in the doldrums at the time, didn’t exactly have a slew of compelling contenders to take the place of Cheers, and the program earned an unlikely renewal. Not much later, the annual Emmy nominations were announced, and Cheers was all over the list, contending in every major comedy category, including all four reserved for acting (Long would be the sole acting winner that year, though Danson eventually got his due, and Rhea Perlman soon became so unbeatable in the supporting actress category that she eventually stopped submitting her name).

On Emmy night, Cheers was triumphant, notably nabbing the award for Outstanding Comedy Series, its first of four in the top category. “Give Me a Ring Sometime” took the comedy writing award, besting, among others, two other Cheers episodes. Four days later, the second season got underway. Cheers didn’t suddenly become a major hit, but its fortunes definitely shifted following the shower of awards. For the whole season, it was up to thirty-five in the ratings. Of course, its stature only grew from there. By the end of its long run, Cheers laid an honest, compelling claim to being the greatest sitcom of all time. Fifteen years after its finale, the soundness of the argument in its favor still holds.

Other posts in this series can be found at the “Golden Words” tag.