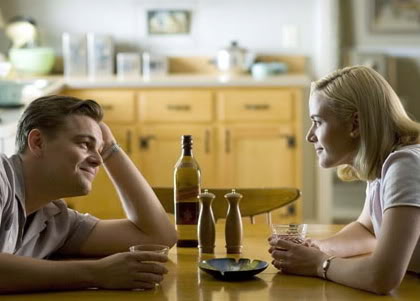 Some time back, I noodled around with a comparative theory about the stylistic methodologies adopted by members of the small, influential group of acclaimed British theater directors who started working in film during the nineties. These are the sorts of things my brain did when I didn’t have this electronic outlet for dispensing sentences filled with movie chatter. I don’t remember every director who I pulled into that circle for purposes of my pontificating or how I evaluated each of them. I know that Sam Mendes was definitely accounted for, and I was already prepared to cite a tendency to over-compose images as his means of establishing cinematic bona fides. This was before that approach reached its stultified nadir with the pristine, soulless Jarhead.

With his latest film, Revolutionary Road, Mendes takes a different tack. He pulls upon his skills from the stage, constructing several scenes with the intricate formality of a play. There are portions of this film that could be lifted whole and placed into a West End theatre with nary an alteration. Often, that sort of description would be indicative of a film that’s hopelessly stiff. In this instance, it’s a measure of how thoroughly Mendes is exploring his central theme of the roles individuals take on as they toil through the challenges of daily existence. One of the very first scenes of the film shows Kate Winslet’s character performing in a community theater play as the curtain comes down. The remainder of the film is a sort of mirror to that moment, exploring the fictions adopted by everyone residing in the flat, constructed idyll of the American suburbs of the nineteen-fifties. If something feels false, it probably is, and the artificiality of much of what’s onscreen merely adds brutal punch to the ferocious arguments that serve as guideposts to the dissolution of a marriage that spines the plot.

Winslet and Leonardo DiCaprio portray the Wheelers, the very model of mid-twentieth century domestic bliss: he taking the train to work in gray, oblong suits while she remains home with two unremarkable (and largely unremarked upon) children, honing the home to crisp, model perfection. Saying their marriage is frayed is like saying coal is a darker color. They’ve each worn masks for so long that the artifice has gone thin, revealing the volatile dissatisfaction and anger underneath. The only respite they get is in the creation of a new fantasy, an effective tactic until that too slips away. DiCaprio and Winslet are both sensational. She particularly captures the quivering intensity of a person lost in her own pain. Winslet’s face is an uncalm sea, hinting subtly, marvelously at the turmoil within. Even as she’s raging, the most telling details are in her sidelong glances, the weakening body language, the brief look of satisfaction after belting out a promised scream.

It is to Mendes’ great credit that he lets his actors, especially the duo at the forefront, carry the film without much fussiness from the camera or editing room trickery. He tells the story, flatly and truly, without prodding the audience. The closest he comes to overt directorial authorship comes in a scene of collaborative artistry with the great cinematographer Roger Deakins. Winslet returns from a retreat into the nearby woods after another explosive argument. Dusk is settling in and everything is cast in a purplish light marking the disappearance of the sun. DiCaprio watches her silently, impotently from the window, their whole world, their whole existence now the color of a bruise. It is elegant and breathtaking, a stirring reminder that movies can sometimes work wonders with just a trick of the light.

Restraint is a trait Mendes is still learning, evident here primarily (almost solely) in the inclusion of approximately two endings too many. Still, Mendes is shrewder, better here than he’s ever been as a film director, demonstrating greater confidence in his collaborators than in his three films prior. The result is an assured, fearless achievement. It’s simply his best film to date.