A few years ago I was working with a group of college students that would occasionally binge on online quizzes. Everyone in the office would be encouraged to take a whirl with the quiz of the moment, and the results would occasionally be posted somewhere on wall, where the humble scrap of paper would be drowned out by the band posters and quickly forgotten. Somewhere in the midst of ascertaining our corresponding identity from within the Muppets and among the myriad of B-Movie Heroes, we checked off boxes to figure out which Marvel superhero we most resembled. When my result was Daredevil, it produced great gales of laughter and endless mockery because the main reference point for the students was the unwatchable movie starring Ben Affleck as The Man Without Fear. No matter how hard I tried, I couldn’t convince them that Daredevil was cool.

But he was. When I first turned my youthful attention to superhero comics, one of the first I bought was Daredevil #166, which featured our hero facing off against the Gladiator, a villain who had circular saw blades mounted on his wrists that he could shoot across the room, a fearsome design to my ten-year-old eyes. I liked it a lot, but I missed the next couple of issues, in part because the bimonthly Marvel titles always seemed a little more difficult to track down on the newsstand.

The next issue I bought was #169, which pitted Daredevil against Bullseye, the costumed master assassin so skilled he could turn anything, including a playing card, into a deadly weapon. By this time, Frank Miller, the artist on the previous issue I got, had taken over the writing chores as well. Though I sensed it more than I knew it back then, the series was unlike any other superhero effort on the stands: dark, brooding, cinematic. Miller, a lifelong fan of Will Eisner, was taking his cues from the master of sequential storytelling, especially from the moody world of The Spirit. (Of course, Miller’s love of The Spirit would eventually lead him down a rabbit hole to his own unwatchable movie.) 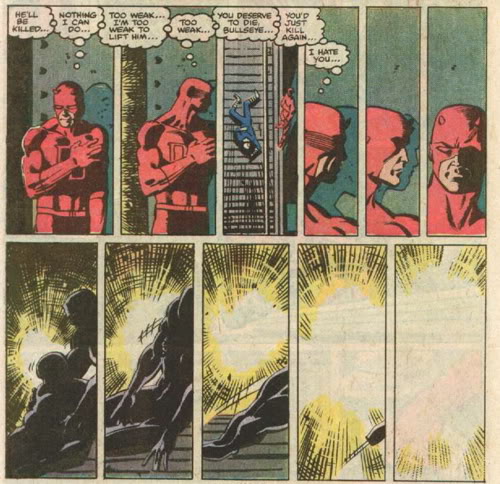 Turns out there was something else highly unique about the way Miller structured his storytelling. As opposed to each issue containing a tidily wrapped up adventure with a few sublots running through with agonizingly slow, soap operaesque pacing, Miller was basically telling one big story. From his first issue as a writer, #168 introducing lost love and skilled warrior Elektra, at least through the cataclysmic #181, Miller built a seductive underworld epic incorporating mob bosses and ninja armies, crime drama and unrequited love, spooky philosophical teachings and grounded concerns tough as city pavement, tragedy and…well, really just tragedy. To his credit, the individual issues were solid reads all on their own. It was only after stepping back and surveying the whole things that the grand totality of it all locked into place. It’s a method that modern comics writers, enamored of decompressed storytelling but largely unable to practice it without sacrificing pace and urgency, would do well to emulate.

I don’t know if there’s anything I could have done to convince those students of all that, to help them see what I saw when Daredevil was one of the titles I craved most on my regular jaunts to the corner of the grocery store that sported a small wall of amazing comics. While I think the quality of those issues is still apparent–more so than is the case with most other superhero stories I consumed back then–it was the contrast of it, the unexpected grit of it, the casual daring that a creator could employ when working on a title that the company bigwigs weren’t all that concerned about that elevated the title. By the time these debates took place, some twenty-five years later, the expectations were different, higher, even among people who didn’t usually read comics, wouldn’t usually consider it as a viable use of their time. Those issues still might have been good. Maybe they even would have seemed cool. But they wouldn’t have been what they were to me, a sort of dark magic.

49 thoughts on “My Misspent Youth: Daredevil by Frank Miller”